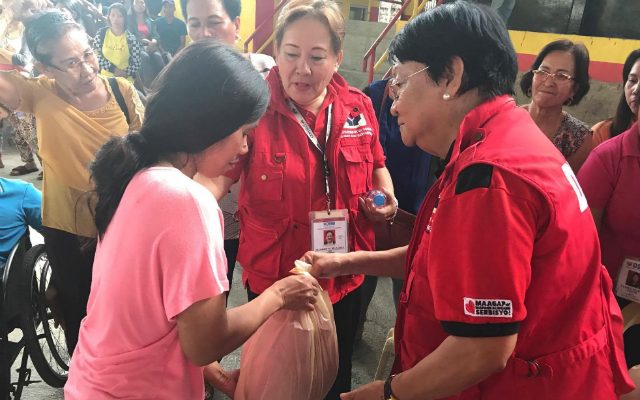 MANILA, Philippines – The Department of Social Welfare and Development (DSWD) said it will work with local government units (LGUs) and other government agencies to better manage evacuation centers as well as provide improved services to families displaced by the Marawi City crisis.

“We need to improve our camp management to incorporate child-friendly spaces, breastfeeding nooks, and prayer rooms, especially that most of the evacuees are Muslims who are observing the Ramadan,” DSWD Secretary Judy Taguiwalo said on Wednesday, May 31.

Taguiwalo had led the distribution of non-food items and cooking utensils on Tuesday, May 30, to enable evacuees to cook their own food.

“The provision of cooking utensils is especially important because it is Ramadan and our Maranao kababayans (countrymen) are fasting and have their own ways of how and when to break their fast,” the DSWD chief said.

The crisis in Marawi City started with a military raid on May 23. Clashes erupted between soldiers and terrorists from the Maute Group, driving away thousands of families.

(There are many senior citizens, children, and infants in the evacuation centers. This is why we are continuously monitoring the condition of the evacuees and assisting them until they can finally return to their respective homes.)

The DSWD has so far provided P36,377,610 worth of relief assistance to the evacuees.

The DSWD Central Office has also provided a total of P60,055,000 to its field offices in Central Visayas, Northern Mindanao, Soccsksargen, and Caraga.

According to the report of the DSWD-Disaster Response Assistance and Management Bureau (DReAMB) as of 6 am on Wednesday, the number of affected residents in Marawi City has increased to 92,628 people or 18,609 families. Of this number, 13,194 people or 2,722 families are staying in 22 evacuation centers in Lanao del Norte and Lanao del Sur.