MANILA, Philippines – Ian Carandang, a self-proclaimed “bear” in the lesbian, gay, bisexual, transgender, and queer (LGBTQ+) community, is a man on a mission to spread awareness about his group’s advocacy known as “DiBearSity.”

A wordplay of “diversity” and “bear”, DiBearSity is the message of the local LGBTQ+ group Bigger Manila which promises inclusivity.

“Bears” include the body type of big, muscular men. Bigger Manila is an organization of “larger men and the ones that like them.” According to Carandang, the advocacy is a reaction to the myth of gay beauty – the slim, tall gay man.

“The idea of bears is that they’re more inclusive,” said Carandang. “Whether you’re big or you’re small but you like big people, we all accept them.” (READ: For the LGBT community, pride is the opposite of shame)

When Bigger Manila first started, the group was only composed of bears and chasers – the ones that are into large men.

“DiBearSity was made to regain the ideal bear community – where everyone is invited, everyone is embraced. Whether you’re a butch or a femme, you’re all welcome,” Carandang said.

The group’s struggles are similar to that of other segments of the LGBTQ+ community – equal rights, marriage equality, family acceptance, work discrimination. (READ: Strength in colors: The Filipino LGBTQ community)

“We do face discrimination. We’re just the same. We’re not special in that sense,” said Carandang.

However, bears are unique in their struggles when it comes to awareness. 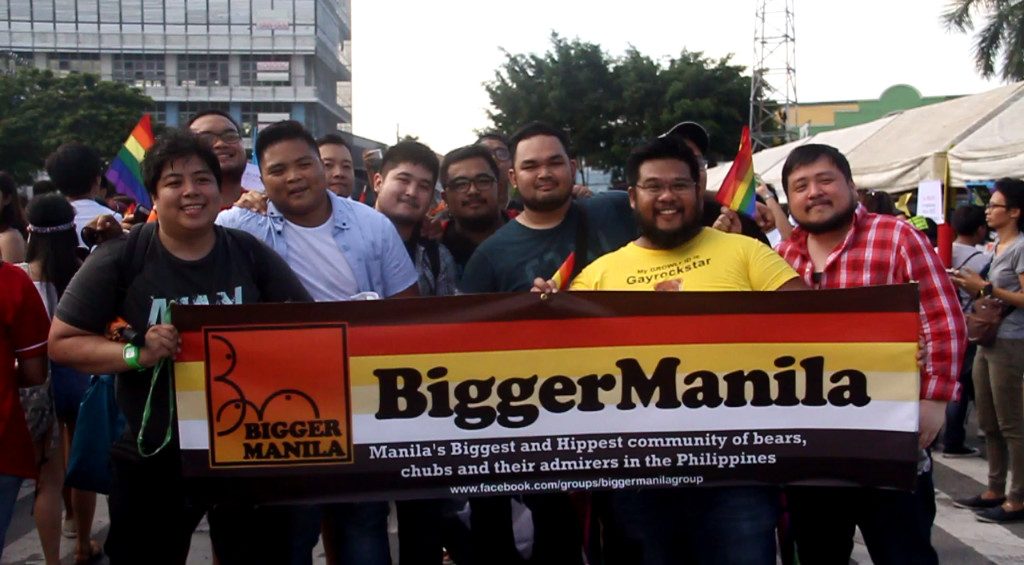 According to Carandang, many Filipinos do not realize the existence of bears. “They’re surprised to see that there are these masculine, manly-looking, gym-going, power-lifting, gay men.”

Since there’s a lack of awareness, said Carandang, many people fail to understand the diversity of their subgroup. (READ: Is the Philippines really gay-friendly?)

He noted that a larger percentage of them are “naturally closeted.” Carandang attributes this to the more masculine personality and larger build of the members, which is contrary to the notion of how gay people are.

The Bigger Manila bears also strive for body positivity. “Body positivity is a big part of the bear scene,” he said. “It’s really just about accepting and loving yourself.” (READ: When your friend is gay)

Carandang was once the type of guy who refused to remove his shirt when swimming, afraid of getting jokes about his large physique.

Carandang stressed the importance of accepting yourself first and tuning out criticism from others. (READ: Manila pride: When pride is all about love)

“Once you stop caring and stop worrying about what other people think, and just accept and cherish yourself for who you are, life becomes so much better,” he added.

Discrimination against members of the LGBTQ+ community comes from all sides – from non-LGBTQ people who refuse to recognize their struggles and sometimes even among the LGBTQ members themselves.

Even for gay dating apps like Blued and Grindr, discrimination based on body types and physical looks is on full display: “No chubs. No effems. No uglies.” Hanky, a similar app, lets its users “judge” and “vote” on the looks of the person before they can sign up for an account.

A 1993 book by Alan Klein, titled Little Big Men, said gay men’s obsession with muscularity resulted from the AIDS crisis, where gay men equated muscles with good health and strived to be buff by constantly working out. Thus, “the tyranny of buffness.”

A 2009 study also showed that gay men’s bodily concerns are usually due to external factors such as the prevailing image of beauty among the LGBTQ+ community – thinness, muscularity, and attractiveness.

In a report by the Philippine Star, Filipino gay men shared that homophobia is likely influenced by a heteronormative patriarchal society and the usual notion of gay men as flamboyant and comic. (READ: The long road to an LGBT anti-discrimination law)

With the issue even more felt in the age of social media, events like the annual pride celebration continuously serve as a safe space for every member of the LGBTQ+ community. It is a proponent of true diversity. For Carandang, unity is of utmost importance. The division of the LGBTQ+ community acts as a hindrance to progress, especially in terms of legislation.

“If we want to get something done in terms of legislation, the only way we’ll do that is if we mobilize and [be] united,” he said.

“We can all be diverse. We can all have our own interests. But we all have to come together and be united, so we can get things changed,” he added.

Cultural change is key in fighting homophobia against and within the LGBTQ+ community. “How did we change [racism and sexism]? We educated ourselves. We taught each other,” Carandang said. (READ: How to be a true friend to LGBT folks)

Carandang also stressed the importance of calling people out for ignorant and insensitive statements and actions against LGBTQ+ people. But it’s easier said than done.

In order to spread “DiBearSity”, Bigger Manila holds regular activities such as “My Chuva” or “My Chubby Valentine” during February and “Chubbiboo” or their own version of a Halloween party. They also plan to bring back their monthly tradition of DiBearSity nights where both bears and chasers can hang out in a safe space.

But again, lack of awareness about the group is a problem. “In Manila, we don’t really have a bear bar. In other countries, they do, like in Taiwan and Japan. But the [local] market is not strong enough to hold a regular bear bar.”

The annual pride march, in which the group regularly participates, plays an important role in strengthening unity of the community. (IN PHOTOS: #HereTogether at the 2017 Metro Manila Pride march)

From Come Out for Love (2014), to Fight For Love (2015), to Let Love In (2016), and now Here Together, Metro Manila Pride has always been about solidarity among LGBTQ+ members and their allies. (IN PHOTOS: Why we’re #HereTogether)

True diversity, awareness, body positivity, and acceptance – these are the messages of DiBearSity and Bigger Manila that Carandang hopes will resonate with Filipinos. – Rappler.com

Renzo Acosta was a Rappler intern.