Rappler Talk: Naomi Fontanos on support for the LGBTQ+ community 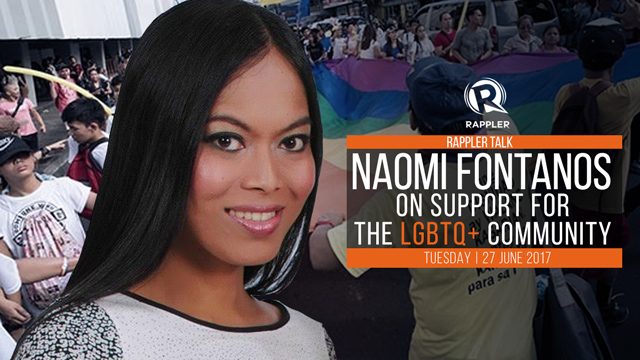 MANILA, Philippines – Every year in June, members of the LGTBQ+ (lesbian, gay, transgender, bisexual, queer, et al) community and their supporters celebrate Pride Month. Here in the country, gay rights advocates are calling for solidarity among Filipinos as they fight to end gender inequality and discrimination.

A survey by Metro Manila Pride revealed that the Philippines’ LGBTQ+ community has 3 main issues: lack of acceptance and violence in the home, discrimination in the workplace, and bullying in schools. (READ: Is the Philippines really gay-friendly?)

At 3 pm on Tuesday, June 27, Rappler talks to Naomi Fontanos, executive director of Gender and Development Advocates (GANDA) Filipinas, a non-governmental organization that works to protect and promote human rights based on sexual orientation, gender identity, and gender expression (SOGIE).