Catch these speakers at the Agos Summit on Disaster Preparedness 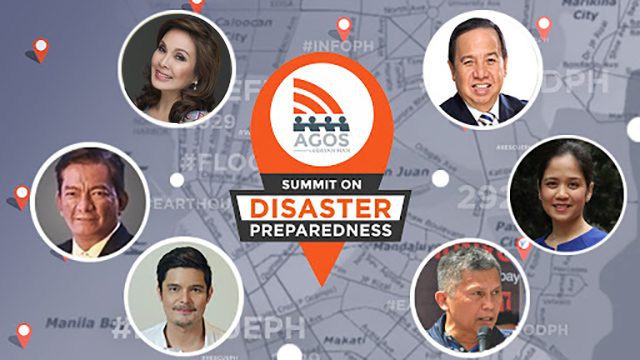 MANILA, Philippines – This July, the Philippines is observing the National Disaster Resilience Month.

Learn from leading champions, experts, and practioners of disaster risk reduction and climate change adaptation at the Agos Summit on Disaster Preparedness this Friday, July 7, and Saturday, July 8.

Here are the profiles of several key speakers at the Agos Summit, which was organized by Rappler’s civic engagement arm MovePH: (Check the full program at the bottom) Her inspiring advocacy on environmental protection and climate resilience has earned her global recognition. In 2015, she was named Global Champion for Resilience by the United Nations Office for Disaster Risk Reduction (UNISDR) and was bestowed by the French government with the title of Knight in the National Order of the French Legion of Honor for her environmental and cultural advocacies.

As a top-calibre journalist before she was elected Senator, Legarda earned prestigious awards such as the Ten Outstanding Young Men (TOYM) from the Philippine Jaycees (1992) and The Outstanding Women in the Nation’s Service (TOWNS) Award (1995). Senator Richard Gordon is the chairman of the Philippine Red Cross (PRC). Known as an “action man,” he is credited for strengthening the organization and building up its capability into the foremost humanitarian organization in the country. He steered the modernization of PRC’s rescue capability through the acquisition of emergency response equipment and vehicles including M/V Amazing Grace, the biggest humanitarian and disaster response vessel in the country.

Albay 2nd District Representative Joey Salceda is considered as the father of the Albay and Manila Declarations on Disaster Risk Reduction (DRR) and Climate Change Adaptation (CCA). The declarations paved the way for The Climate Change Act of 2009 and the National Disaster Risk Reduction and Management Act which established DRR and CCA as priorities in both local and national government.

Salceda was often referred to as the Green Economist Governer of Albay when he was serving as the governor of the province. The former governor oversaw the replanting of nearly 318 hectares of mangrove swamps to better protect coastal areas from dangerous storm surges and build tsunami resiliency.

In 2010, the United Nations Office for Disaster Risk Reduction (UNISDR) recognized him as a Senior Global Champion of DRR for his innovative efforts to institutionalize disaster risk management at the local level. Prior to her appointment, she was the president of the SEED Institute, a nonprofit sustainability research organization that she cofounded. While at SEED, she led, in partnership with Ateneo de Manila/Manila Observatory, the greenhouse gas emissions assessments of Puerto Princesa, Metro Manila, the entire Philippines, and the Malacañang Palace.Secretary Vernice Victorio is the acting vice-chairperson and executive director of the Climate Change Commission (CCC), with over a decade of experience in environmental advocacies. A Management Engineering (cum laude) graduate from the Ateneo de Manila University, she is the first Filipino to earn a master’s degree in Industrial Ecology (referred to as the “science of sustainability”) at the Norwegian University of Science and Technology. As a former military officer, he has developed an early appreciation for the mandate of the OCD and NDRRMC. His active involvement in rehabilitation and recovery efforts in the aftermath of Tropical Storm Sendong that struck Iligan City in December 2011 is a sterling example of his earlier efforts as a strong DRRM champion.Usec Ricardo Jalad is the administrator of the Office of Civil Defense (OCD) and the executive director of the National Disaster Risk Reduction and Management Council (NDRRMC).

Jalad’s distinguished military assignments include his stint as Assistant Division Commander of the Philippine Army’s 5th Infantry Division in Gamu, Isabela from May 2013 to September 2014 and Acting Commander of the same division from February to April 2014. Jalad has a Masters in National Security Administration (MNSA) from the National Defense College of the Philippines. Usec Austere Panadero has served the Department of the Interior and Local Government (DILG) for the last two decades, becoming undersecretary in 2007.

Through his leadership, local government units are continuously capacitated on disaster preparedness. Under his watch, Oplan Listo (Operation Plan Alert) was developed and implemented, emphasizing the range of actions for early and critical disaster preparedness at the local level.

Panadero is an Industrial Engineering graduate of the University of the Philippines. He started his career in government with the Development Academy of the Philippines in the early 1980s. In 2016, the Ateneo de Manila University confered on Panadero its Government Service Award for the undersecretary’s “unflagging devotion to the difficult work of transforming local governments to become participative, accountable, and effective.” 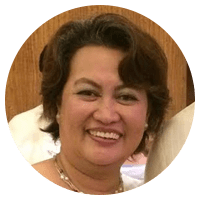 Usec Hope Hervilla heads the operations and protective services of the Department of Social Welfare and Development (DSWD). For over 3 decades, she was involved in various women and children advocacies as an activist leader and social worker.  She also taught at the Central Philippines University in Iloilo City, where she finished her Bachelor of Science in Social Work degree in 1985. She placed second in the 1987 National Social Work Board Examinations.

Hervilla founded the Save Our Lives, SOS! Panay and Guimaras, a network of civil society groups and individuals that helped address concerns from the oil spill tragedy in Guimaras in 2006 to recovery efforts in the region after Super Typhoon Yolanda (Haiyan). Dr Renato Solidum Jr has been with Phivolcs since 1984, the agency tasked to mitigate the effects of earthquakes, tsunamis and volcanic eruptions. He has recently been appointed as the DOST Undersecretary for Disaster Risk Reduction and Climate Change Adaptation.

In 2010, Solidum received the Presidential Lingkod Bayan award for raising the bar of disaster risk reduction and initiating a nationwide mapping program in the Philippines.

He’s a recognized expert in Geochemistry, Marine Geology, Volcano and Earthquake Geology, Geologic Hazards Assessment and Awareness, and Earth Science Education. He holds a Master’s Degree in Geological Science from the University of Illinois and completed his PhD in Earth Science at the Scripps Institute of Oceanography, University of California in San Diego. Assistant Secretary Paul Pangilinan is the chairman of the National Youth Commission’s (NYC) committee on environment. He is a former Sangguniang Kabataan chairman and barangay councilor in Quezon City. Dr Alfredo Mahar Francisco Lagmay is the executive director of the University of the Philippines Resilience Institute. He also heads the UP Nationwide Operational Assessment of Hazards (UP NOAH), a center established to conduct research, development and extension services on natural hazards, disaster risk reduction, and climate change actions.

Lagmay is a professor at the UP National Institute of Geological Sciences. He received his Bachelor’s and Master’s degrees from UP and holds a PhD degree in Earth Sciences from the University of Cambridge (2001).

His work is focused on volcano-tectonics, fluid dynamics of volcanic flows, remote sensing, and Permanent Scatterer Interferometry of faulted regions. Upon receiving his PhD, he returned to the Philippines and has been involved in numerous research efforts related to natural hazards. He lectures on Philippine Disasters by virtue of having hands-on experience in search-and-rescue and forensic analyses of major Philippine catastrophes. Daniel Sinnathamby is the interim country director of Oxfam in the Philippines. He has more than 24 years of leadership and management experience with international relief and development agencies in country management and regional leadership in Asia and Africa.

He has demonstrated thought leadership within humanitarian and development organizations in managing complexity, strategic planning, and effective coordination and management of complex partnerships and networks. He has held regional and country office management positions in Sri Lanka, Lesotho/South Africa, Mozambique, Angola and India and assistant country director and country director positions and regional leadership positions in Asia and southern Africa. Dr Reena Estuar is Director of the Ateneo Java Wireless Competency Center (AJWCC) and an associate professor of the Ateneo de Manila University’s (ADMU) School of Science and Engineering. She finished her PhD in Psychology/MS Computer ADMU).

Under her leadership, the ADMU’s Social Computing Lab built e-Bayanihan, which provides ordinary citizens with a web and mobile based application to report disaster experiences, collaborated with Project Agos, Rappler’s disaster and climate change information platform. Fr Edwin is the Executive Secretary and Country Program Head of Caritas Philippines – the social action arm of the Catholic Bishops’ Conference of the Philippines (CBCP).

He is also an environmentalist and the co-founder of the Alliance Against Mining (ALAMIN). He has a PhD in Applied Cosmic Anthropology from the Asian Social Institute. Rina Atienza is a senior communications professional with more than 12 years experience in developing brand campaigns, with a particular strength in community outreach and social advocacy. She has a Masters degree in Social and Cultural History, and is a Certified Neuro-Linguistic Programming practitioner thanks to local Filipino agency Trainstation.

She now works for the Information and Knowledge Management Division of the Climate Change Commission, having chosen to move back to Manila after 20 years living in London. Dingdong Dantes is a multi-awarded actor and the founding chairman of YesPinoy Foundation.

From 2014 to 2016, he served as a commissioner-at-large of the National Youth Commission (NYC), heading the committees on environment and education. He has been instrumental in the delivery of policies and programs that ensured the youth’s meaningful participation in efforts on climate change and disaster risk reduction and management.

In 2015, he spearheaded the #NowPH or Not On Our Watch Philippines campaign which gathered 3.6 million pledges of support for climate action and for the landmark Paris Agreement. Maria A. Ressa has been a journalist in Asia for nearly 30 years and is the author of FROM BIN LADEN TO FACEBOOK: 10 Days of Abduction, 10 Years of Terrorismand Seeds of Terror: An Eyewitness Account of Al-Qaeda’s Newest Center of Operations in Southeast Asia.

Ressa is one of the founders of independent production company, Probe Productions, before reporting for and heading CNN’s Southeast Asia operations for nearly 2 decades (bureau chief in Manila then Jakarta). For 6 years, she was ABS-CBN’s Senior Vice President for News & Current Affairs, handling news operations across multiple platforms.

She is Rappler’s CEO and Executive Editor. Rupert Ambil II began his career in the broadcast industry at the Philippines’ first 24-hour news channel Sarimanok News Network, now ANC, or the ABS-CBN News Channel. In 2000 he left what could have been lucrative employment to work for an NGO in Eastern Samar.

Ambil’s love for journalism persisted and he found himself back at ABS-CBN in 2005 as a Futures Desk Specialist and Field Producer. He left the company as Head of Field Operations for the News Division.

Now, he serves as the Executive Director of Move.PH, the civic engagement and citizen journalism arm of Rappler. One of the pioneers of Move.PH, Voltaire Tupaz creates and manages platforms for public discussion, opening avenues for citizen involvement online and on the ground. He was one of the initiators of Project Agos, Rappler’s disaster and climate change information  platfom. He leads Agos operations during disasters.

Before joining Rappler, headed a consortium of non-government organizations that promotes sustainable development and food security. He also served as a policy advocacy specialist for two NGOs and an international environmental network, raising awareness on indigenous knowledge systems, appropriate technology, climate change, and other development issues.

Here is the full schedule of activities: