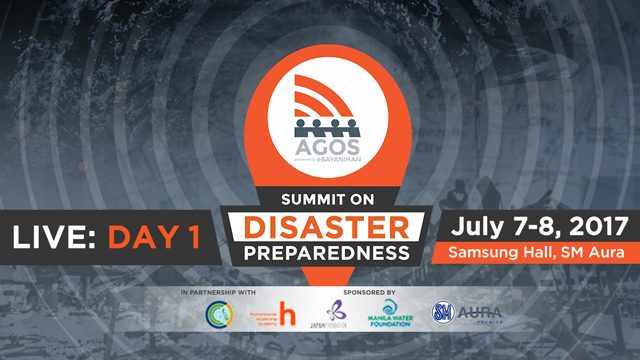 Facebook Twitter Copy URL
Copied
Day 1 of the Agos summit highlights climate action initiated by the youth and women, and LGU preparedness efforts like the #MMShakeDrill. Bookmark this page to watch the summit.

MANILA, Philippines – The observance of the National Disaster Resilience Month in July is a reminder to everyone of the need to reduce risks and be prepared for disasters. What better way to learn about disaster preparedness than from the experts and practitioners themselves?

On July 7-8, disaster management experts, responders, policy makers, and volunteers will gather for the first ever Agos Summit on Disaster Preparedness at the Samsung Hall of the SM Aura mall in Taguig.

The two-day summit aims to bring together key stakeholders, tackle pressing issues, and learn from good practices that mitigated risks or achieved zero casualties in a disaster scenario. It is organized by MovePH, Rappler’s civic engagement arm.

Day 1 of the summit begins at 10 am, highlighting climate action initiated by vulnerable sectors like the youth and women.

The afternoon session will focus on the upcoming Metro Manila Shake Drill (#MMShakeDrill), a metro-wide earthquake drill which will be held from July 14 to 17, 2017 to test the metro’s response to a possible 7.2-magnitude earthquake.

Chairman Danny Lim of the Metro Manila Development Authority (MMDA) will discuss plans for the #MMShakeDrill and what companies, schools, and the general public should do before, during and after the drill.

Representatives of Metro Manila-based establishments, village associations, and civic groups are highly encouraged to attend Day 1 of the Summit to learn about best practices for conducting earthquake drills in your communities.

Outside the Samsung Hall, Agos partners will have booths displaying the latest gear for your Go Bags and other informative exhibits. There will also be a demonstration on how to create a solar lamp by the Liter of Light Foundation. The XChange Fair is open to the public. – Rappler.com