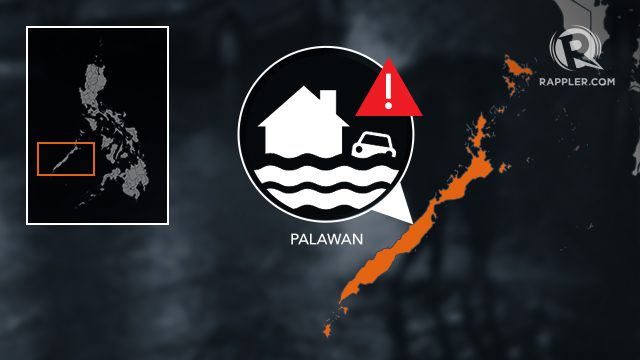 Facebook Twitter Copy URL
Copied
According to the Provincial Climate Change Action Plan 2017-2023, an estimated 244,997 people are highly susceptible to landslides, with Puerto Princesa City, Roxas, and Rizal having the highest population exposure

PUERTO PRINCESA, Philippines – With the rainy season in full swing, the Provincial Disaster Risk Reduction and Management Office (PDRRMO) here has reminded communities residing in hazard-prone areas to always be prepared for disasters.

PDRRMO officer-in-charge Cruzalde Ablaña said people living in hilly to mountainous areas, and along the shoreline and rivers are vulnerable to climate-related hazards such as landslides, storm surges, and flooding.

“Kapag sinasabihan natin ang ating mga kababayan na maghanda, ‘wag namang ipagwalambahala. Ibig sabihin, paniwalaan at sundin ang tagubilin mula sa authorities (When we tell our countrymen to prepare, they should not ignore it. They should believe and follow the advice of authorities),” he added.

In general, most of the towns located in southern and central Palawan are the ones “more prone to flooding than the rest of the province with available data,” according to the Provincial Climate Change Action Plan 2017-2023.

The action plan estimated 73,201 people to be exposed to high risk of flooding, mostly residing in Balabac, Bataraza, and Puerto Princesa City.

The towns identified as having flood-prone areas are Taytay, Quezon, and Narra, while the towns of Agutaya, Busuanga, Cagayancillo, Coron, Culion, Cuyo, Kalayaan, and Magsaysay recorded no flooding.

An estimated 244,997 people are highly susceptible to landslides, with Puerto Princesa City, Roxas, and Rizal having the highest population exposure, the report added.

Meanwhile, expected to be affected by storm surges are mostly coastal areas with an estimated exposed population of 39,962 across the province, according to the action plan. Cagayancillo and Bataraza have the highest exposed areas at 20.44% and 13.55%, respectively.

However, due to the bigger population in the more urbanized Puerto Princesa, the Palawan capital remains to have the highest population exposed to storm surges, the action plan showed. It is followed by Bataraza, which has seen an increase of inhabitants owing to job opportunities from the growing plantation development and mining operation in the area.

There are also areas that may likely experience multiple hazards, where communities are vulnerable to a combination of two or 3 of the previously mentioned threats. Over 1,000 people or about 200 households in various towns of the province are deemed highly exposed to these hazards, the action plan said.

Ablaña said his office, in partnership with the Office of Civil Defense, local government units, and partner organizations like Pilipinas Shell Foundation Incorporated, trained in June the municipal DRRM officers (MDRRMOs), who will cascade the life-saving information down to the barangay level.

Ablaña urged the public to closely coordinate with their respective MDRRMOs, especially when there is heavy rainfall.

He also urged residents in concerned communities to have “go kit bags” containing basic needs for survival, such as canned or packed goods, flashlight, first-aid medicine, among other essentials.

Ablaña said a series of community-based risk reduction and management training sessions will kick off starting August. “As part of our preparedness measures, we have a budget of almost P5 million for 2017 for training alone,” the PDRRMO chief said.