Seats that save kids’ lives: Why are they rarely used in the Philippines? MANILA, Philippines – Pele Escueta, 3, and Julio Baltasar, 6, may not know each other but they do share a common experience: They have both survived car crash incidents.

In July 2017, Pele was in his parents’ SUV on his way to a family holiday. The vehicle was at full stop at a red light when a van, whose driver had fallen asleep, suddenly rammed it from behind. The impact left Pele’s mom, actress and TV host Jolina Magdangal, with slight injuries. It shattered the front windshield of the van and the rear windshield of the SUV.

Pele was unscathed. “He did not even cry,” his dad, musician Mark Escueta, wrote in a Facebook post.

In the case of Julio, the boy was being driven to his preschool in the family sedan in 2014, when the driver nodded off at the wheel. The car, which witnesses said was going at 60 kilometers per hour (kph), hit a vehicle. The car was a total wreck; Julio, then 3 years old, was seriously hurt.

The boy was sitting in the front seat. His mom, Kelly Baltasar, who was at work at the time of the crash, said Julio’s mouth might have hit the dashboard.

“Three of his upper front teeth were forced into his gums, and the teeth needed to be surgically extracted,” Baltasar said. Julio was in the hospital for 3 days. He was fed liquids and soft food for a month, as his mouth needed to be closed for complete healing.

What kept Pele safe in the violent crash? He was in his front-facing car seat when the crash occurred, his father said in an email interview. The seat was strapped to the rear seat of the SUV.

Pele’s car seat is a type of child restraint. Child restraints, which include infant seats and booster seats, are designed to reduce the risk of injury in the event of a collision. In Pele’s case, the car seat kept him from being thrown against the car interior or catapulted forward to hit other car occupants.

“We’re very strict with the car seat,” Magdangal said in a message during her morning show. “Even if traffic is heavy and Pele wants to sit on my lap, we insist that he stays in his car seat.”

In contrast, on the day of Julio’s crash, he was not in a car seat. He could no longer fit in the seat that he used till he turned a year old.

“My husband and I used a car seat for each of our 3 kids when they were babies. And we were unaware that the next step was for us to get a bigger car seat,” said Julio’s mother. “We have not seen one on the market.”

All parents want their kids to travel safely in cars. A new study found that child safety was the most common reason cited by drivers in the Philippines for using child restraints. Hilton Y. Lam, Wilfredo A. Atienza, and Adovich S. Rivera authored the unpublished baseline study on the availability, affordability, and acceptability of age-appropriate child restraints in the Philippines. The World Health Organization (WHO) funded the study. In fact, the use of child restraints dramatically increases a child’s chance of surviving a road crash. “If correctly installed and used, child restraints reduce deaths among infants by approximately 70% and deaths among small children by between 54% and 80%,” according to a WHO fact sheet.

There is no comprehensive data. Now the baseline study offers interesting insights.

Researchers interviewed 1,004 drivers throughout the country for the study. Here’s what they found on the demand side:

In a nutshell, too few drivers know about child restraints. No wonder the rate of using the life-saving system is low.

Aside from low awareness, the respondents cited other reasons for not using child restraints. Here are some of these reasons, what the findings from the study show, and what research indicates.

This is a fact. “Legislation mandating the use of child restraints can be an effective way to increase the use of restraints and reduce injuries,” WHO said in the Global status report on road safety 2015. In the Philippines, the proposed laws on the use of these child safety devices are still being debated.

To date, there are at least 5 legislative bills related to child restraints that have been filed in the 17th Congress. Two bills – House Bill 5595 and Senate Bill 1447 – seek to penalize the driver of a privately owned motor vehicle who does not tsecure at all times a child in a child restraint system while transporting him or her on any road, street, or highway. Both bills are pending in different committees. (READ: Road safety advocates seek passage of child restraint bill)

This is a fallacy. The study found that there are 7 brands with local distributors in the country. At least 25 more brands are available via online purchase from the company store or from online sellers.

In addition, the study found that 84% of the car models being sold in the Philippines are equipped with ISOFIX. As defined in Seat-belts and child restraints: a road safety manual for decision-makers and practitioners, “ISOFIX is a system that uses purpose-designed mounting points provided in the vehicle to attach the child restraint with a rigid mechanism, rather than using the seat-belt to secure the restraint.”

This is a fallacy. Many people think that traffic is so bad that motorists can’t speed up on the road. But even at a speed of just 48 kph, unrestrained children run a high risk of severe injuries and even death.

Moreover, a car seat “is not only to protect your child in a speeding vehicle,” said lawyer Evita Ricafort. “It’s also designed to protect the child if your car gets hit by another vehicle.”  This is exactly what happened in Pele’s case.

The study also found that drivers are willing to pay between ₱1,000 to ₱5,000 for child restraints. This shows that a secondhand unit is within the reach of the drivers who were surveyed.

To parents who find a child car seat pricey, pediatrician Anthony Calibo had this to say: “Car seats ensure protection for the child. More catastrophic injuries will be more expensive to treat.” In Julio’s case, his hospital bills came up to ₱80,000, according to his mother. If the family did not have health insurance, the bills would have been much higher.

Does Mark Escueta recommend that parents use a car seat for their children? “Most definitely,” he said.

Since road crashes are unpredictable, it pays to be proactive.

“We were stopped at a stoplight….when the other driver fell asleep at the wheel and rammed us from behind. We had no control over that, but we DID have control on how prepared we wanted to be IN CASE something like that happened,” he said.

He added, “Your car has insurance, which you pay annually. A car seat can be your child’s additional ‘insurance,’ and it’s a one-time expense. Now what’s more important? Your child or your car?”

Yet it is certain that they are exposed to road crash risks. Based on the 2010 census, over 30 million children – 33% of the population – are aged 0 to 14 years old. This is the age group for which the use of child restraints is appropriate.

From 2010 to 2015, the number of children in this age group who were injured or killed in road crashes has steadily increased. 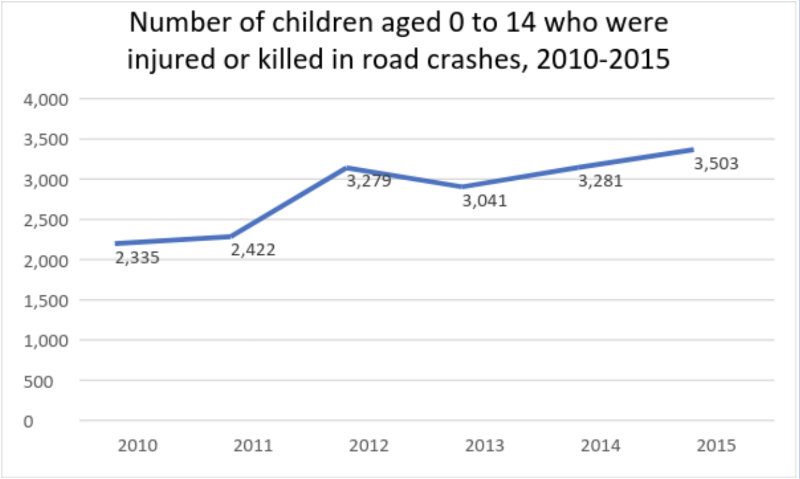 Another alarming finding comes from the baseline study on the availability, affordability, and acceptability of age-appropriate child restraints in the Philippines authored by Lam,  Atienza, and Rivera. They found that many drivers stopped using child restraints when the child passenger turned one. As the child grew older, the rate of child restraints use dropped. This lessens a child’s chance of surviving a road crash. – Rappler.com