MANILA, Philippines – The hundreds of Tenement residents who face the constant threat of eviction found a champion in an unlikely person. Their champion did not grow up at the 11-storey housing project that has been standing for at least 54 years. He did not even grow up in the Philippines.

His name is Mike Swift. In the community, he goes by the monicker Mr. Pinoy Hoops.

A basketball player and advocate, Swift grew up Brooklyn, New York, a place known for its bustling and colorful street basketball culture where players are not afraid to get down and dirty shooting hoops.

Living in the Philippines for more than 3 years did little to remove the thick accent Swift picked up from his Brooklyn upbringing. Whenever he speaks, his words would form a rhythm, it would almost sound like he is rapping.

Despite constantly standing out at the Tenement building, Swift has learned to call the place his second home. After all, the Tenement court is reminiscent of the basketball courts in New York City that have been the home of many legendary players in the United States.

During his first encounter at the court in 2014, Swift promised to help the community and make basketball their common rallying point.

In October 2014, the National Housing Authority (NHA) gave Tenement residents a deadline: they have 30 days to evacuate the housing project and transfer to a relocation site in Cavite.

The Tenement is one of the mass housing projects constructed under the administration of former President Diosdado Macapagal. Built in 1963, Tenement was Macapagal’s response to the sudden influx of new settlers trying their luck in the metropolis during the 1960s. Back then, rent was only at P14 a month.

In 2014, the NHA warned residents that the building is “condemned” and would instantly collapse in the wake of an earthquake. In a study conducted by Department of Works and Highways, however, it said that the then 51-year-old building only needed retrofitting. 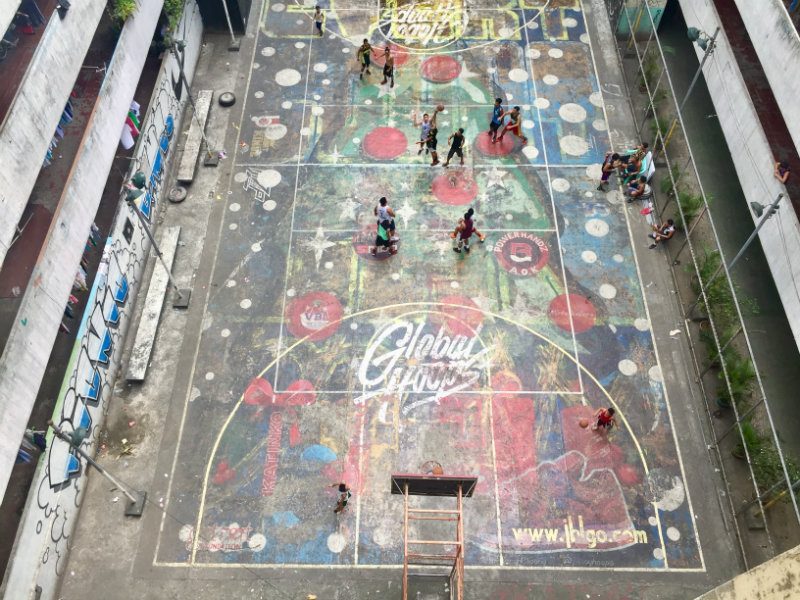 Armed with their conviction and the knowledge about the study belying NHA’s claims, residents fought back. They said they do not want to leave the home they have known all their lives.

They also appealed to the local government of Taguig: “Help us retrofit the building.” While their appeals fell on deaf ears, they refused to move.

It was during this tumultuous times when Swift thought of staging the first Picnic Games.

“I chose the Picnic Games, I kind of did it for them to forget their problems here,” he said.

The first Picnic Games brought together artists for a night of music and entertainment. Profit from the event went to the community to help renovate the court and repair the building. During the Picnic Games, he would also solicit second-hand sneakers to give to the barefoot players in the community.

Since then, the Tenement court has earned a spot in the international basketball scene.

“The Tenement had become the top 5 most beautiful court in the world. It was voted. We are trying to get to number 1 though. So we continue our mission here, hoping that in the future, people and the government take notice how special this place is and they get to work together peacefully along with the residents to help fix and maintain their stay here,” Swift said.

With the new-found fame of the basketball court, the residents were granted extension after extension to stay.

Swift heard about all the horror stories and the bad reputation the Tenement building has earned through the years. He said, however, that reality is far from those grim images.

“What I learned about this community? It’s a loving community. This is not a squatters’ area. There are a lot of hard-working folks here at the Tenement,” he said.

Inside the faded and vandalized building is a tight-knit, colorful community.

On one of the floors, a unit has set up a sari-sari store. On the floor above, a shirtless man grilled barbecue and hotdogs he will be selling for dinner. On the third floor, two mothers were catching up probably on the latest gossip in their neighborhood.

Kids of all ages ran up and down the ramp. Laundry lined the corridors. Dogs took naps on the ramp in between floors.

Below, at the court, two teams were playing a competitive game of basketball. The images evoked a typical Filipino community.

Almost all of them knew and greeted Swift as he passed by their units.

“We have this bond like I feel like Tom Cruise in the Last Samurai or something. I am not really from here but they embraced me and I am like their adopted son here. And I am glad they did that. I have so much love for them, for embracing me and us together,” Swift shared.

For Mr. Pinoy Hoops, the people in the community are worth fighting for.

“If you know about the Tenement, it ain’t just about the court or the things we want to fix around it. It’s more like the whole building. These people here deserve better. They should not be just be thrown out or sent to relocation place where they don’t want to be,” he said.

Swift used his connections in the basketball scene to raise awareness about the plight of the Tenement residents. In fact, he was instrumental in bringing NBA player LeBron James to the Tenement court in 2015.

“It was not part of his itinerary to come to the Tenement,” Swift said. “There was even a big storm the night before the visit.”

Despite that, Swift and his friend Maya Carandang pushed through with the painting of the LeBron mural. The whole court was painted with bright orange. On the floor, James LeBron was depicted shooting hoops.

That day, despite the weather forecast, people packed the floors and anticipated the basketball megastar’s arrival.

“When he did walk in, I think that changed. There goes the turning point,” Swift recalled.

During his visit, LeBron left his handprint on the wall of the building and watched Filipino kids play basketball. While the NBA player stayed for only around 30 minutes, the moment lasted forever for Swift.

“It was definitely surreal. Here is one of the biggest sports public figure in the world, walking into the most disregarded project housing in a third world country. So it’s like two opposite ends but here he is in this building, which proves that we were not wrong about knowing how special this place is,” Swift said.

While the court has been in the spotlight countless of times, a lot has yet to be done to ensure the residents’ continuous stay in the building. They need to repaint the court, repair electricity wirings, retrofit the floors, and even create jobs for some of the residents.

To make these lofty goals happen, Swift has set up a crowdfunding campaign to “save the Tenement.” The money will be used for the following:

Their group also still accepts second-hand sneakers they can distribute to residents who have none to use. On Friday, August 27, Swift and his friends will also be staging the 7th Picnic Games at the Tenement building, hoping to attract more help from different people.

Swift firmly believes that every court can dream. And until his dreams for the Tenement court have fully materialized, he said he will stay and continue being a “soldier” for the community.

“There’s a long way to go. We are still looking for that turning point. Despite all the negativity, this is one of the positive things which they can look at,” he said. – Rappler.com

Those interested to donate second-hand sneakers for barefoot players at the Tenement building may get in touch with Mike Swift through his Instagram accout.