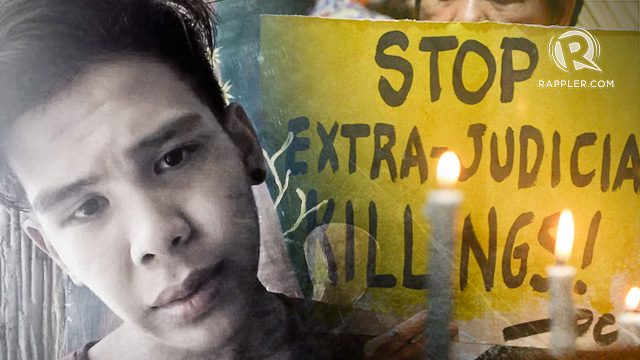 Bookmark this page for updates

Delos Santos was among the 81 dead from the latest waves of “one-time, big-time” anti-drug operations by the police in Metro Manila and surrounding areas which President Rodrigo Duterte has praised. “Maganda ‘yun (It was good),” he said. (READ: Our son, Kian: A good, sweet boy)

The Department of Justice has already ordered an investigation into Delos Santos’ death.

Delos Santos’ death has fueled criticism of President Rodrigo Duterte’s war on drugs, which has killed thousands since he took office on June 30, 2016.

Here is a running list of protests against the killings:

Those attending the march are encouraged to wear black and bring candles.

Concerned citizens will march to the place where Kian delos Santos was killed. They will visit his wake after. Meet-up will be from 4:30 pm to 5 pm at Sta Quiteria Church.

At 4 pm, Monday, there will be a silent march from Penaranda Park to Legazpi Boulevard.

Organizers encouraged protesters to wear black shirts and to bring placards. However, they discouraged groups from bringing organizational flags and banners.

A candle-lighting ceremony will be held at the Provincial Capitol Lagoon in Paghimud-os Shrine at 6 pm, Monday.

An indignation rally and candle-lighting ceremony will be held from 3 pm to 6 pm at Malcolm Hall steps in University of the Philippines – Diliman. Wearing black shirts is encouraged.

A noise barrage will be held in front of the Philippine National Police headquarters at Camp Crame – EDSA Gate in Quezon City. This will be held at 4:30 pm, Wednesday.

“The President has said time and again that he will allow mass protest as long as it does not cause public inconvenience or compromise public safety. This is consistent with PRRD’s philosophy that criticism – good or bad – is part of the territory of anyone working in the government,” Abella said in a statement.

“Having said this, we enjoin protesters to fully cooperate with police authorities who are expected to exercise maximum tolerance during the event.” – Rappler.com

Are you organizing a similar protest action? Share your event on X or tag us on Twitter @MovePH.