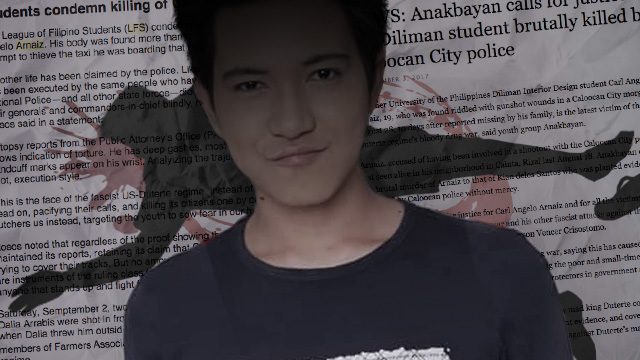 Arnaiz was killed by police on August 18. Netizens, especially young people, demanded for justice for the teenager and noticed the similarities of his death with 17-year-old Kian delos Santos who was also killed by Caloocan police on August 16. (READ: Kian and Carl: Parallelism in the deaths of two boys)

However, in a press briefing, Philippine National Police (PNP) chief Ronald dela Rosa said that the case of the former University of the Philippines Diliman student is not the same with the case of delos Santos. (READ: Carl Arnaiz another Kian delos Santos? Nope, says Dela Rosa)

He emphasized that the police did not target Arnaiz for drugs but for involvement in hijacking and robbery of a taxi. The driver of the cab, however, had two different testimonies according to his affidavits.

“Definitely, we condemn this killing and we are angry that this happened again,” said Karla Yu of Millennials Against Dictators (MAD) in a phone interview.

The group believes that the administration of President Rodrigo Duterte has created a policy of violence and a culture where extrajudicial killings and police brutality are part of the outcome.

“We are calling the President to end this. They are not catching the big fish. How many innocent lives need to be sacrificed?” added Yu.

Yu expressed their group’s distrust of the Department of Justice and demanded that the Ombudsman conduct its own investigation on the death of Arnaiz just like what it is currently doing for Delos Santos. (READ: Ombudsman starts own probe into Kian delos Santos’ death)

She said that she knew a lot of people who started to question their undying support to this administration and to the war on drugs because of what happened to Kian delos Santos. Yu hoped that this change of public perception continues.

The League of Filipino Students (LFS) also condemned the death of Arnaiz and expressed its distrust in the country’s police force.

“Another life has been claimed by the police. Like Kian delos Santos, another student has been subjected to violence, and has been executed by the same people who have promised to serve the people,” said LFS national spokesperson JP Rosos.

Rise Up for Life and for Rights is a human rights organization that helps victims of the drug war and their families.

(This is disturbing because the killings of young people who are the future of this nation, has not stopped. During the wake of Kian, there were others who were killed in the same city [Caloocan City].)

At the end of the day, citizens call for transparent investigation and justice for the death of the two teenagers.

“We are one in calling for justice for Carl Angelo Arnaiz and for all the victims of the US-Duterte dictatorship’s crazed drug war and his other fascist attacks against the Filipino people,” said Anakbayan National Chairperson Vencer Crisostomo. – Rappler.com