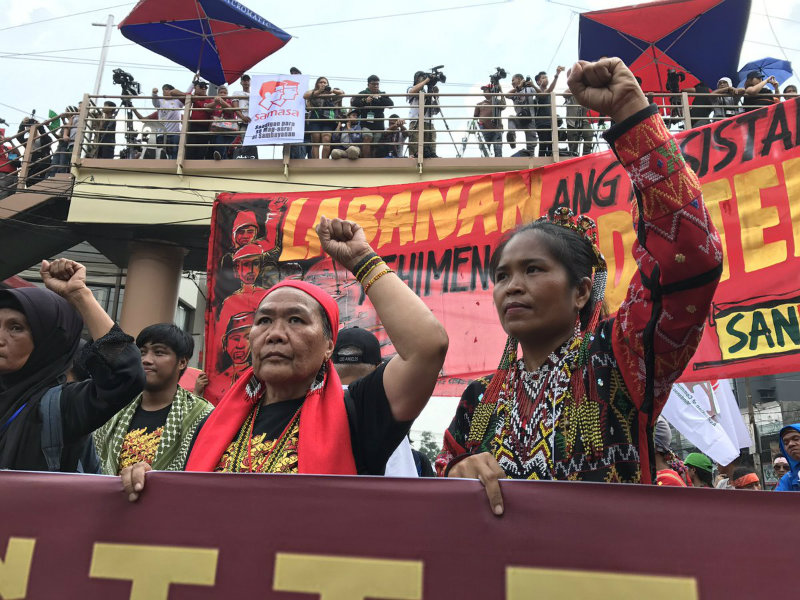 MANILA, Philippines – Opening the program at the protest rally on Mendiola Thursday, September 21, a number of Lumad from Mindanao performed an interpretative dance, where President Rodrigo Duterte, wearing an American flag, is depicted as the enemy.

(Our call is to fight the Duterte regime. We are calling on him to lift martial law in Mindanao and stop the bombing of Lumad communities.)

At least 2,000 members of the national minority groups was at the Mendiola rally, joining the nation’s remembrance of the 45th anniversary of Marcos’ Martial Law. It was the culminating activity of their annual protest caravan called Lakbayan.

On Thursday afternoon, during President Duterte’s visit to Marawi City, he announced that he would lift martial law in Mindanao once clearing operations were completed. Government troops have launched their final push to end the 4-month-old conflict in the Islamic city, where local terrorists group continue to hold hostages.

Fanagel said they brought with them stories of incessant attacks on indigenous peoples and the worsening militarization of schools in their communities since Duterte declared martial law in Mindanao in late May. (READ: LIST: Martial Law 45th anniversary activities, protests)

On Wednesday, September 20, they received reports that the 39th Infantry Batallion dropped bombs on civilians and Lumad communities in Barangay Balite in Magpet, North Cotabato.

One of the Lumads who directly experienced the effects of the reported militarization in their communities is Datu Jimboy. He said he has evacuated his home at San Fernando, Bukidnon, 6 times since Duterte declared martial law in Mindanao. 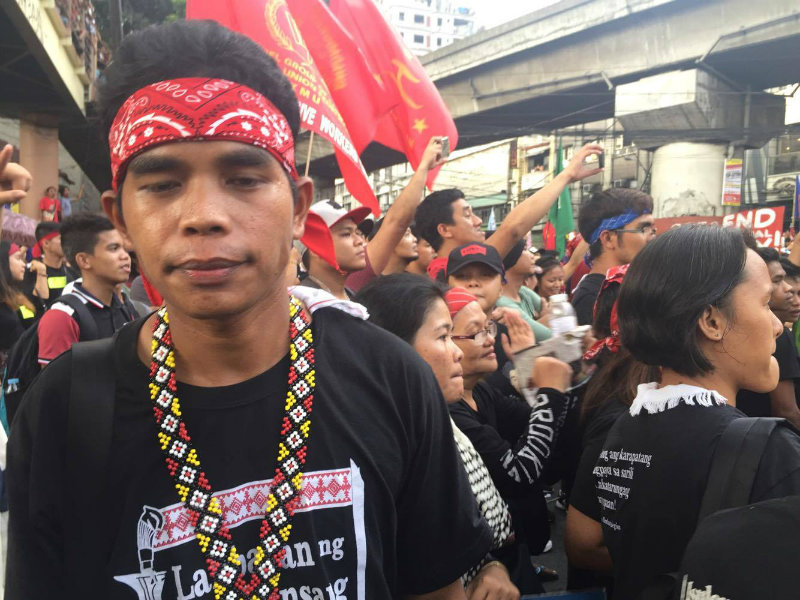 (It was very difficult. We thought it was going to be the end our lives, that was why we decided to evacuate across the Provincial Capitol. We saw first-hand how our children suffered from hunger.)

Jimboy said they decided to join the Lakbayan after the local government failed to help them.

“Dahil sa kawalang ng hustisya sa korte at walang tulong ng gobyerno kaya kami nag-Lakbayan papunta dito,” Jimboy said. (Because we did not receive help from the courts and the government, we decided to join the Lakbayan.)

According to Fanagel, the experience of Jimboy and other members of national minorities was remniscient of what their elders went through 45 years ago.

In June, the Lumad groups called on Duterte to lift martial law in Mindanao and pull out troops from their communities so the children could return to their schools.

According to them, since the declaration of martial law, soldiers have occupied schools in their communities. They have also supposedly been accused of being members of the communist New People’s Army (NPA) simply because they were taught to read, write, and count.

Mindanao Interfaith Services Foundation Incorporated, a school in the mountains of Davao City, stopped classes after government troops occupied the building. According to Jinky Malibato, an evacuee from Davao, martial law has become an excuse for the military to be unnecessarily violent.

Their plea, however, fell on deaf ears when the Congress approved Duterte’s request to extend martial law to December. – Rappler.com