6 in 10 injured in road crashes are motorcycle riders 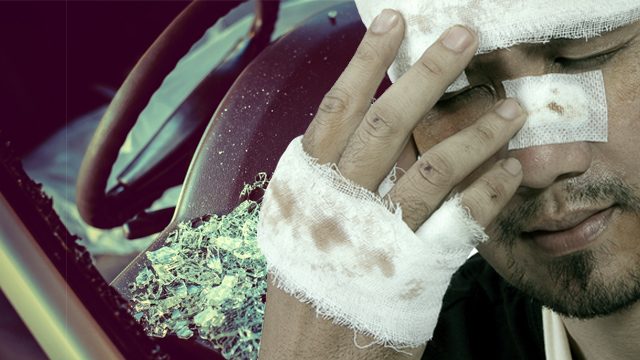 Facebook Twitter Copy URL
Copied
Motorcycle riders have constantly been the top victim of road crash injuries since 2010, according to data from health department

According to the World Health Organization (WHO), between 20 millin and 50 million more people suffer non-fatal injuries, with many incurring a disability as a result of their injury. Road traffic injuries are also the leading cause of death among people aged between 15 and 29 years.

These road traffic injuries do not only cause financial losses to victims due to expensive treatments and rehabilitation, but also physical and psychological challenges from the impact of a crash.

Without sustained action, road traffic crashes will be the 7th leading cause of deaths by the year 2030, the WHO said.

In the Philippines, the most common type of injury is abrasion, which comprise more than half of the road crash-related injuries. Abrasion is a wound caused by superficial damage to the skin. This is usually a result of hitting the ground or another vehicle.

The second type of injury is open wound and laceration. It is a wound produced by the tearing of a body tissue, as distinguished from a cut or incision.

Some other injuries recorded in 2015 were: contusion or when blood vessels are damaged as the result of a blow, closed fracture, concussion, and avulsion or when a body structure is forcibly detached from its normal position. 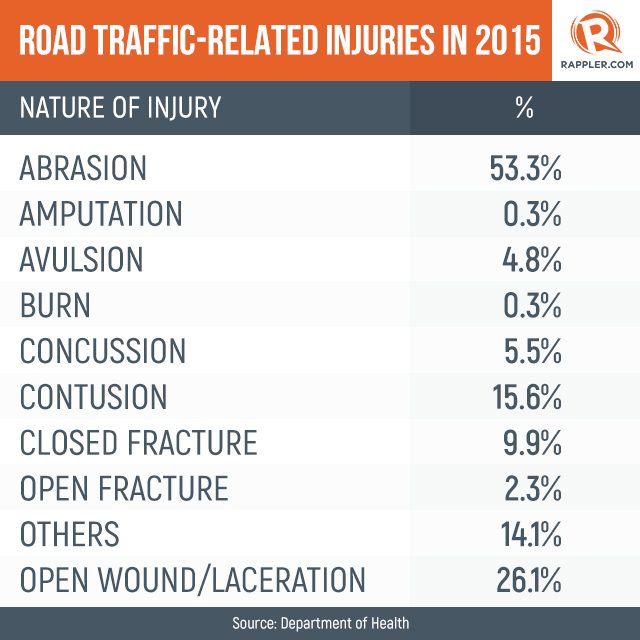 Motorcycle riders have constantly been the top victim of road crash injuries since 2010. From 6,244 injuries in 2010, the number of recorded injuries increased to 19,852 in a span of 5 years. A CBS report said passengers seated in the rear are more likely to sustain chest injuries during a crash. It also cites a study that found “some evidence of an elevated risk of head and neck injuries for restrained women seated in the rear compared [to] the front.”

Since 2010, 18,031 children below 14 years old were injured, while more than 500 children have died every year since 2006 due to road crashes. (READ: IN NUMBERS: Road crash incidents in the Philippines)

The region with the most number of recorded injuries is Central Visayas with 17.4%, followed by Western Visayas with 10.6% and Central Luzon with 9.4%.

The Central Visayas has consistently been the region with most road-traffic related injuries since 2010, with the majority of the injuries in Cebu and Bohol.

Most of the road traffic-related injuries happened during the busiest times of the day: 4 pm to 7:59 pm, and 8 am to 12 pm.

The data also showed alcohol to be the top identified risk factor in cases of injury. Other risk factors include drugs, use of mobile phones, sleepiness, and smoking. (READ: Human error: Leading cause of road mishaps in Metro Manila )

According to Dr Bernadett Velasco, chairman from the Philippine College of Emergency Medicine, recovery time for minor injuries would take around 1 day to 5 days. Major injuries usually take 3 to 6 months. This could even reach a year if rehabilitation is required, depending on the severity of the injuries.

She explained how road traffic-related injuries can affect a person financially and psychologically: “Most of the victim involved are those in the student to the working-age range. If they are the breadwinner of the family, it is only not him who will be affected but also the whole family.”

Velasco added: “Depression is almost seen in all patient who had to recover for a long time. Usually, the cause of depression is inability to go back to their normal activities.”

She advised the public to always have a first aid kit that contains a gauze, clean cloth, alcohol, povidone iodine, and tape to aid those who figure in crashes.

“Do not move the patient with obvious deformity. Wait for an emergency response team or place a splint in the area or support the area involved whenever you move the victim. Call 911 or the local emergency number to inform the authority so they will know the resources to dispatch,” she said. – Rappler.com