Oct 4, 2017 10:03 PM PHT
Rappler.com
Facebook Twitter Copy URL
Copied
'That Nieto did all this under oath should have earned him a perjury charge or a contempt citation at the very least,' says the National Union of Journalists of the Philippines 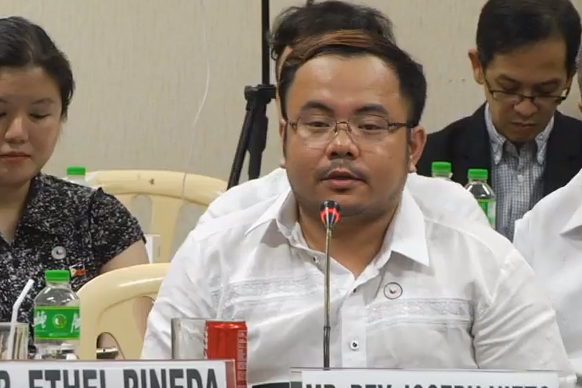 Nieto, a consultant at the Department of Foreign Affairs (DFA), cited during the hearing his earlier claim that photojournalist Jes Aznar endangered the lives of soldiers fighting in Marawi for his “live updates” on social media.

In a statement, the NUJP called out Nieto for “attempting to resurrect his utterly discredited accusation” and said that there is no place for the likes of him in the government. (READ: Propaganda war: Weaponizing the internet)

“We say, let him be accountable himself. There is no place in government – or in the field of professional communications, for that matter – for barefaced liars,” the statement said.

The NUJP also slammed Nieto for omitting facts during the hearing by making it appear that his criticism of Aznar is “a benign reminder to an errant journalist.”

“Nieto made it appear that what he did was a benign reminder to an errant journalist instead of the hate-filled and, worst of all, totally false rant that it was. And while he did mention that his followers had been ‘angered’ by what Aznar supposedly did, he omitted the fact that his lies had unleashed a barrage of harassment and threats against the respected photojournalist,” the statement said.

On June 16, Nieto wrote on his Facebook page that Aznar’s post “revealed positions of government soldiers” during an encounter against the local terrorist group Maute in Marawi City.

Nieto also told Aznar that he may be “served a warrant of arrest anytime” due to his actions as the President declared Martial Law in Mindanao.

Meanwhile, Aznar said that Nieto repeating his claims during the Senate hearing is “proof of fake news.”

“His use of this issue at the Senate hearing is proof enough that he is spreading fake news,” Aznar said in a Facebook post.

Aznar is a photojournalist who shoots for Getty Images, whose clients include the New York Times. He said that he is still in close coordination with the Armed Forces of the Philippines (AFP).

“If Nieto’s accusations of endangering the troops were true, why is the AFP still allowing me to cover on the ground, and why is it until now there are no sanctions against me, especially if Mindanao is under a state of martial law?” he said.

Citing his consultancy job at the DFA, Aznar said: “If he is so good at military analysis, why is he with the DFA and not the AFP or DND?” (READ: State-sponsored hate: The rise of the pro-Duterte bloggers)

The NUJP also said that Nieto’s statements under oath could earn him a perjury charge or a contempt citation.

“That Nieto did all this under oath should have earned him a perjury charge or a contempt citation at the very least. That he did so as a consultant of the DFA, paid with the people’s money, makes it a hundred times worse,” the statement said.

“Indeed, that the DFA even considered taking him in says much of how low the standards of governance have sunk and how much premium quality service to the people means to the government,” it added.

Nieto, a known pro-Duterte blogger, has over 691,000 followers on Facebook and receives thousands of likes, shares, and comments on his posts daily.

He was hired as a social media consultant at the DFA headed by Foreign Secretary Alan Peter Cayetano. The former senator was Duterte’s running mate in 2016.– Aika Rey/Rappler.com