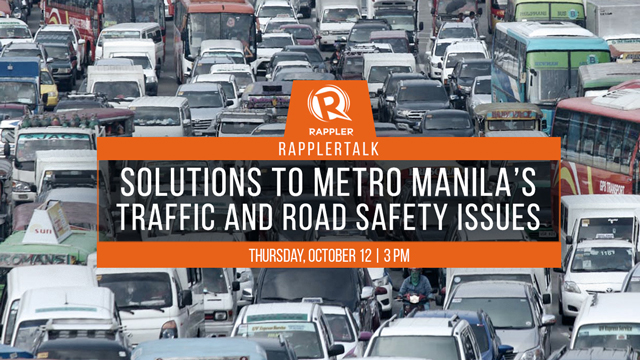 MANILA, Philippines – Traffic has been one of the major issues that people living and working in Metro Manila face every day. According to a study, being stuck in traffic and the extra cost of operating vehicles in gridlock in metropolitan Manila and nearby areas amounted to P2.4 billion ($51 million) a day in 2014.

Not only this, Metro Manila alone recorded 109,322 road crash incidents in 2016. According to the data, motorcycle riders and pedestrians are the most vulnerable to such incidents, while human error is the identified cause for these crashes.

Public transportation has not improved as well. Recently, there were viral photos that showed several long lines snaking from the entrance of the LRT2’s Santolan Station. The same long lines can also be seen at the other train lines in Metro Manila.

What are the possible causes and solutions for this growing problem? Are our laws comprehensive enough?

On Thursday, October 12, at 3 pm, Rappler researcher Aika Rey and Primitivo Cal, a transportation expert and University of the Philippines professor, will discuss the best possible solutions to these issues.

Cal served as an undersecretary of the Department of Transportation and Communications from 1993 to 1998.