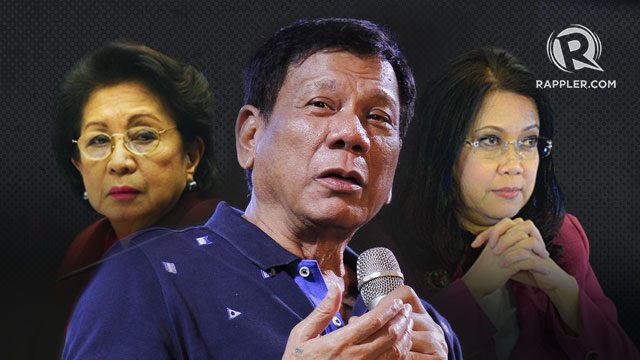 Facebook Twitter Copy URL
Copied
According to the Alternative Law Groups, 'These acts deliberately undermine the independence of the institutions whose duties primarily consist in upholding public trust...and maintaining checks and balances so that tyranny would not arise from any branch of the government again'

MANILA, Philippines – Law groups slammed President Rodrigo Duterte for his “brazen assaults” against Chief Justice Maria Lourdes Sereno and the Office of the Ombudsman, saying such attacks undermine the independence of constitutional bodies mandated to maintain the system of checks and balances in the government.

Alternative Law Groups (ALG) – a coalition of 23 legal resource non-governmental organizations that aim to uphold the principles and values of alternative or developmental law – made the statement on Friday, October 13, as Congress tackles the impeachment complaints against the two officials.

“[We] denounce the brazen assaults against democratic institutions of President Rodrigo Duterte, which undermine the independent bodies mandated by the Constitution to maintain the system of checks and balances in the government,” ALG said.

ALG said while the 1987 Constitution “puts impeachment as a mechanism to make top officials accountable…in this case, it is apparent that the attacks and threats of impeachment against the Chief Justice and the Ombudsman come directly from the top official himself, President Duterte.”

Duterte had been criticizing and hurling allegations against Sereno and Ombudsman Conchita Carpio Morales in his public addresses. He had even suggested that all 3 of them resign and just allow the military to investigate them for graft and corruption. (READ: ‘Do not be afraid to be minority’: Chief Justice Sereno, 5 years on)

The President had repeatedly accused Morales of “selective justice” and openly supported the impeachment bid against her when the Office of the Ombudsman began its probe into the complaint on his alleged ill-gotten wealth.

ALG said Duterte’s threat of impeachment against Morales, his attacks against Overall Deputy Ombudsman Arthur Carandang, the creation of a body that can supposedly investigate outside the executive like the Ombudsman, and “his refusal to be submit himself to the jurisdiction of the Ombudsman, are clear signs that these are counter-attacks to intimidate the Office that is probing his wealth.”

“These acts deliberately undermine the independence of the institutions whose duties primarily consist in upholding public trust by cleansing the government’s ranks of graft and corruption and maintaining checks and balances so that tyranny would not arise from any branch of the government again,” ALG said.

“We stand with these institutions not because of the people who are associated with them but because they are the remaining safeguards towards a balanced and just government free from corruption and despotism,” it added.

The group appealed to Congress to help uphold democracy in the country.

“The members of the House of Representatives and the Senate must remember that Filipinos hold democracy dear to them. The Filipino people count on them to be circumspect in accordance with their sworn duties and to heed the public outcry in bolstering our governmental system of checks and balances,” ALG said.

It also called on the media and the civil society to “lead the people, and be the vanguards of truth and knowledge in these trying times.”

“We must always remember that an informed and empowered public, equipped with the truth and social consciousness, is still more powerful than the most brilliant political player and a barrel of a gun,” ALG said. – Rappler.com