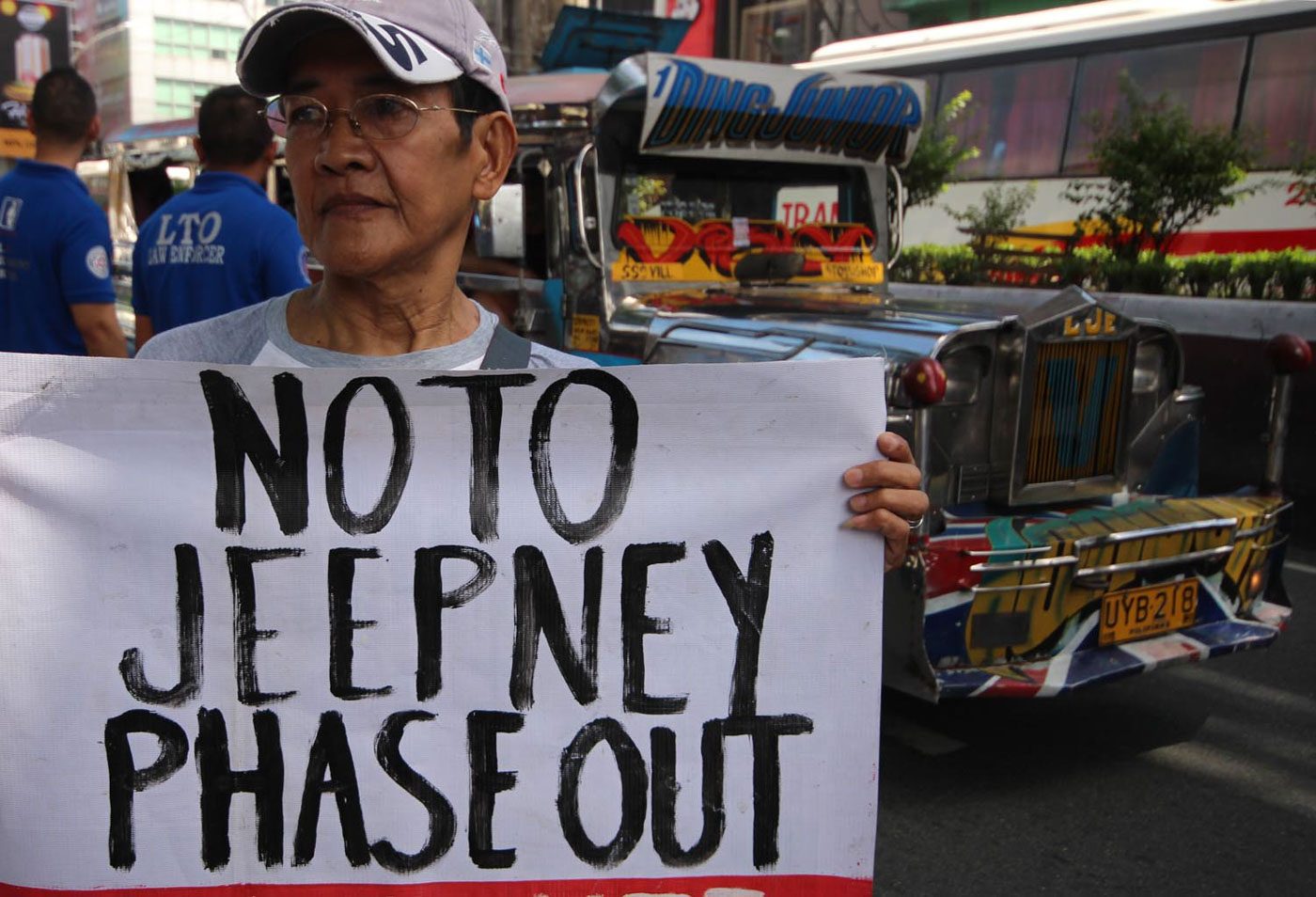 MANILA, Philippines – Transport groups said they are not against the plan to “modernize” public utility vehicles by 2020, but they are against the “questionable” schemes behind it.

Jeepney routes in parts of Luzon were “crippled” by the nationwide transport strike in protest of the government’s PUV modernization program held on Monday to Tuesday, October 16 to 17.

While many commuters complain of the inconvenience brought by the strike, many jeepney drivers and operators fear a loss of livelihood. (WATCH: Abala ba ang transport strike?)

But what kind of modernization do they envision?

The strike was the 3rd organized by the major transport group Pinagkaisang Samahan ng mga Tsuper at Operator Nationwide (Piston), as they called out the modernization plan “anti-poor.”

Under the PUV modernization program, jeepneys aged 15 years and older and non-Euro 4 compliant engines must be replaced with the new models prescribed by the government. Around 180,000 jeepneys need to be replaced, transport officials said.

These models cost at least P1 million per unit according to government estimates. (READ: Is the PUV modernization program ‘anti-poor?’)

Piston secretary-general Steve Ranjo said they are not opposing the selling of new models; rather, they want to make these a “voluntary acquisition” especially to those who own jeepney models that are less than 15 years of age.

(What we are opposing is that by law, all jeepneys need to be replaced. We can’t replace all the vehicles and say ‘these are no longer working.’)

Ranjo also said that the new jeepney models are too expensive for driver-operators. (Those who want to buy the new vehicles, they can buy. We’re not forcing them not to. Our plea (to the government) is not to force all those who do not need it. The new jeepneys are too expensive.)

If emission are a problem, Ranjo said that the government should instead look into alternative technologies that address emissions for Euro 2 engines which power most jeepneys.

“The (Department of Environment and Natural Resources) already has approved technologies that address smoke belching. Those can be installed in your vehicles and are not expensive,” he said.

Installing alternative technologies to address smoke belching is better than buying a new jeepney, he added.

Ranjo also said the government should consider partnering with local jeepney manufacturers like Sarao Motors and Francisco Motor Corporation in producing the vehicles.

He argued that the current version of the of the plan is more likely inclined to working with multinational car companies, citing the government’s Comprehensive Automotive Resurgence Strategy (CARS) that incentivized Mitsubishi Motor Philippines Corp and Toyota Motors Philippines.

(Why do you have to give (the incentives) to big companies? Better to give the grant to Sarao and Francisco. They should be the ones to help rehabilitate our jeepneys.)

He also said that the government should look into improving the country’s steel industry to revive the local automotive industry to make it sustainable in the long run.

The Department of Transportation (DOTr) repeatedly gave assurances that local manufacturers will design and produce the vehicles.

However, when lawmakers asked if local companies would be able to compete with big car firms, transportation officials said they could “if they have the capacity.” (READ: PUV modernization: Planning, readiness issues raised at House hearing)

Modernization is not exclusion

A huge number of poor drivers will be excluded in the modernization plan, Ranjo argued.

He said that many drivers fear they will be buried in debt, even with the loaning schemes to cooperatives that may amount to more than P2 million per unit after computing amortization.

“The loaning scheme is very limited. They said that you cannot avail of the loan yourself. That requirement alone excludes many small operators,” Ranjo said in a mix of English and Filipino.

But the DOTr has yet to come up with clear guidelines on the loaning scheme for the new jeepney models.

“Kapag sumuko na ang operator dahil sa utang, eh ‘di sa kanila na ang franchise! (When the operator gives up because of the loans, then the (lender) now has the franchise!),” he exclaimed.

President Rodrigo Duterte previously expressed his support and urged PUV drivers and operators to abide by the law or they will be “dragged away” from their vehicles. He pointed out that Filipinos die because of the PUV’s emissions and because the units are not roadworthy.

Ranjo, however, viewed the statement of the President as an “utmost disregard of the poor.”

“Talagang wala nang puwang para sa mga mahihirap. Sink or Swim. Wala nang pretense na tumutulong siya. (There is really no space for the poor. Sink or swim. He is no longer pretending that he helps),” he said.

Ultimately, Piston suggested that the government should instead work on nationalizing mass transport than allowing private companies take over franchises.