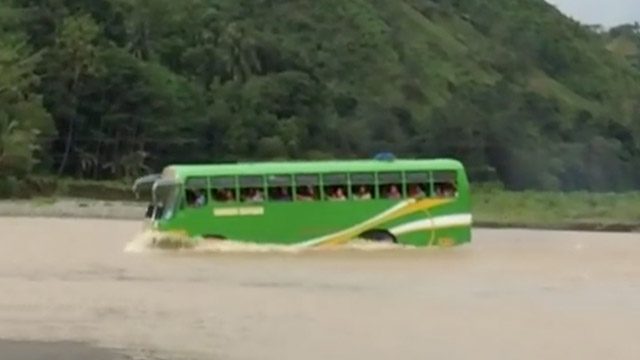 MANILA, Philippines – A video showing a bus braving a swollen river in Zamboanga del Norte has been making the rounds online.

As of Tuesday afternoon, October 24, the video posted by Facebook user Lang Jauculan has been shared more than 1,000 times and has gotten over 60,000 views.

According to a GMA-7 report, the bus was carrying students and teachers when it crossed the river. No one was hurt.

Authorities said this is not the first time that this happened. In fact, vehicles passing through the area often cross the river since there’s no bridge.

According to Department of Public Works and Highways (DPWH) officer-in-charge Assistant District Engineer Christopher Ebal, they have been trying to seek funds for the construction of a bridge, which he said would cost millions of pesos.

“We tried to use a steel structure but it got destroyed. We really need a bridge,” explained Ebal in Filipino.

While passing through the river and creek is the main option for motorists in the area, Ebal admitted that it can be “really unsafe especially during the rainy season” because of strong currents.

He added that rafts are even used to carry motorcycles through the river during the rainy season.

Local DPWH officials have included a request for the bridge in their budget proposal. – Rappler.com