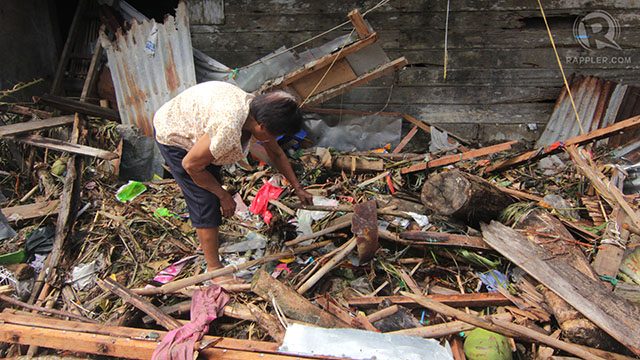 Facebook Twitter Copy URL
Copied
Victims of natural disasters are vulnerable to trauma, as well as mental problems such as stress disorders, depression and general anxiety

On that day, Bret Michael Urmeneta was supposed to celebrate his 20th birthday. Instead, it turned into a tragedy. (READ: TIMELINE: Super Typhoon Yolanda (Haiyan))

A 4th year college student that time, Bret was living in his aunt’s house in Tacloban, Leyte, one of the worst-hit areas during Yolanda. During the typhoon, he and his relatives were trapped in their house for more than 8 hours before they were rescued. “I thought it was already my last day,” he recalled in an interview.

After the flood subsided, Bret never expected the devastation that he would see on his birthday. The city was flattened. Everything was washed out by the flood. He saw cadavers of young and old people, as well as animals, on the streets. Fortunately, all his family members survived, including his parents who were living in Jaro, Leyte.

“It was emotional damage. I still feel afraid sometimes when it rains hard,” he said of his traumatic experience.

On Yolanda’s 4th year on Wednesday, November 8, Bret will turn 24. But he doesn’t celebrate the date anymore. (READ: Yolanda Museum to rise in Tacloban 4 years after deadly typhoon)

Yolanda, one of the most powerful typhoon recorded, killed more than 6,000 people in the Philippines.

Due to Yolanda, he had to cross enroll from University of the Philippines Visayas (UPV) Tacloban Campus to UPV Iloilo. Now a certified public accountant, he said he was lucky to have a strong support among his peers.

NCMH is the biggest mental health facility in the country operated by the Department of Health (DOH).

In times of disasters, some people lose their family members; others lose their livelihood. These experiences could lead to trauma, according to Vicente, adding that it could take months or years to recover for some.

Victims of natural disasters are also vulnerable to other mental problems such as stress disorders, depression and general anxiety, he added.

During a disaster, most of the burden is also usually carried by the mother of the family.

Lily Acuyado, 41, a mother of 3 from the coastal village of Talon in Roxas City, Capiz, said that fear still remains, though it has been 4 years. “I still feel fear. I fear that the same disaster like Yolanda will happen,” she shared.

Their house, which was among the 16 houses situated along the riverbanks in their village, was destroyed during the onslaught of Yolanda. They also lost their boat, which was their main source of income.

After losing everything, Acuyado’s family was left with no choice but to start over again.

“As a mother, it is more painful to see my children suffer the situation. I don’t want them to experience it again,” she said.

Acuyado said aside from the financial assistance, psychosocial support given to them by different government agencies and non-government organizations helped her cope with the emotional stress of the disaster.

With climate change, Vicente noted that mental health must also be given attention. “We need to give more focus on mental health,” he stressed.

He said the DOH is also training people to provide immediate psychosocial support to victims of disaster. This year, the department allocated more than P1 billion for mental health projects, majority of which is for the improvement of mental health facilities in the country.

Vicente said some areas in the country still lack facilities to cater to mental health patients. The Ilocos region, Central Luzon, and the Autonomous Region of Muslim Mindanao have no DOH-operated mental health hospitals.

The country only has a total of 6,000 beds in mental health institutions. Aside from that, some areas also don’t have access to medication, he added. (READ: Why we need a mental health law in PH)

Severe mental health is already affecting at least one percent of the total Philippine population, according to Vicente.

Mental health is just one of the impacts of climate change to public health.

Climate change is also affecting social and other environmental determinants of health – clean air, safe drinking water, sufficient food, and secure shelter, according to engineer Bonifacio Magtibay of the World Health Organization in the Philippines.

Magtibay said the WHO projects that between 2030 and 2050, climate change is expected to cause approximately 250,000 additional deaths per year, due to malnutrition, malaria, diarrhea and heat stress.

Climate change’s direct damage cost to health is also estimated to be between $2 to 4 billion per year by 2030.

Magtibay added that areas with weak health infrastructure – mostly in developing countries like the Philippines – will be the least able to cope with climate change without assistance to prepare and respond.

In the past years, the WHO has worked with different government agencies in the country to raise awareness about climate change’s impact to public health. The WHO has created programs focused on health emergency and water safety, considering that water sources and water quality are affected by climate change and disasters.

In the next two years, WHO will focus its climate change support to health care facilities by “greening” hospitals, ensuring that greenhouse gas emissions are curbed and the physical structure is safe from disaster, said Magtibay.

Meanwhile, health will also be the key theme in this year’s Conference of the Parties (COP 23) to the United Nations Convention on Climate Change (UNFCCC) in Bonn, Germany. (READ: Children’s health in peril as climate impacts escalate in PH)

The COP 23 will start two days before the 4th anniversary of super typhoon Yolanda. In the conference, governments will convene to discuss the next steps after the 2015 Paris Climate Agreement, in which the Philippines is one of the signatory.

In the 4th year of Yolanda and on his 24th birthday, Bret has 3 wishes.

Karen Bermejo is a freelance journalist based in Boracay Island, Aklan, Philippines. She is a 2017 Southeast Asia Fellow for Climate Tracker, a global network of climate journalists.