Nov 12, 2017 9:25 AM PHT
Raisa Serafica
Facebook Twitter Copy URL
Copied
Militant groups are planning to burn an effigy of the US President on Monday, November 13 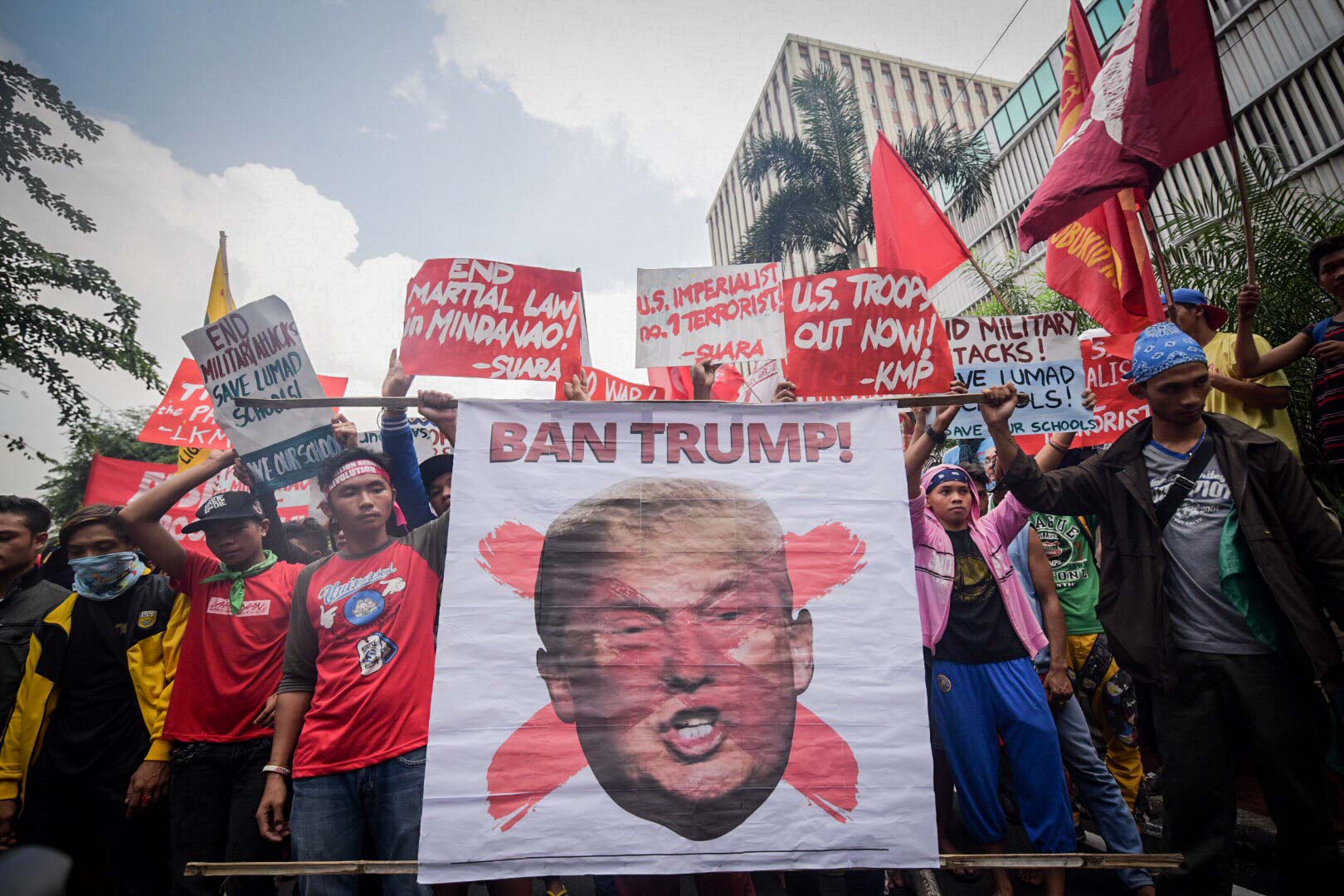 MANILA, Philippines – Aside from the usual fanfare the Philippine government has prepared for the arrival of world leaders, US President Donald Trump will be welcomed to the Philippines with a series of protests.

Despite strict regulations against protest rallies near summit venues, militant groups have lined up a wave of events around the Association of Southeast Asian Nations (ASEAN) summit. They are also planning to burn an effigy of the US President on Sunday, November 12, in time for his arrival in Manila.

“Ban Trump in the Philippines” is their rallying cry. According to different militant groups, they are expecting at least 1,500 protesters on Monday, November 13, at the beginning of the ASEAN Summit activities.

Why are groups protesting against the first Philippine visit of the US President?

‘No to US global war of terror’

During a press conference on Friday, November 10, Laban ng Masa said they are calling for the end of “US encroachment on the sovereignty of nations in Asia through war and one-sided economic relations.”

According to the coalition of militant groups, the objective of Trump’s Asian tour that included stops in China, Japan, South Korea, and Vietnam was to convince and include Asian nations in US’ “war rhetorics.”

According to the Washington, however, the main foreign policy item on the agenda of the US President’s Asian trip will be the efforts to contain or roll back North Korea’s ballistic and nuclear missile programs.

(The primary objective of Trump’s visit, according to the Washington, is trade and security in the ASEAN region. But based on his visits to Japan and South Korea, it seems like he wants to involve the Philippines in the US’ war rhetorics against North Korea. He wants to involve ASEAN nations in waging wars.)

Atty Aaron Pedrosa of SANLAKAS also said that both the Mamasapano massacre and the war in Marawi were triggered in line with the US’s “war on terror.”

“Instead of this, we must persist in peace negotiations and continue to root out the cause of longstanding armed conflict, not just in Mindanao but th rest of the country where poverty and inequality thrives,” Pedrosa said. 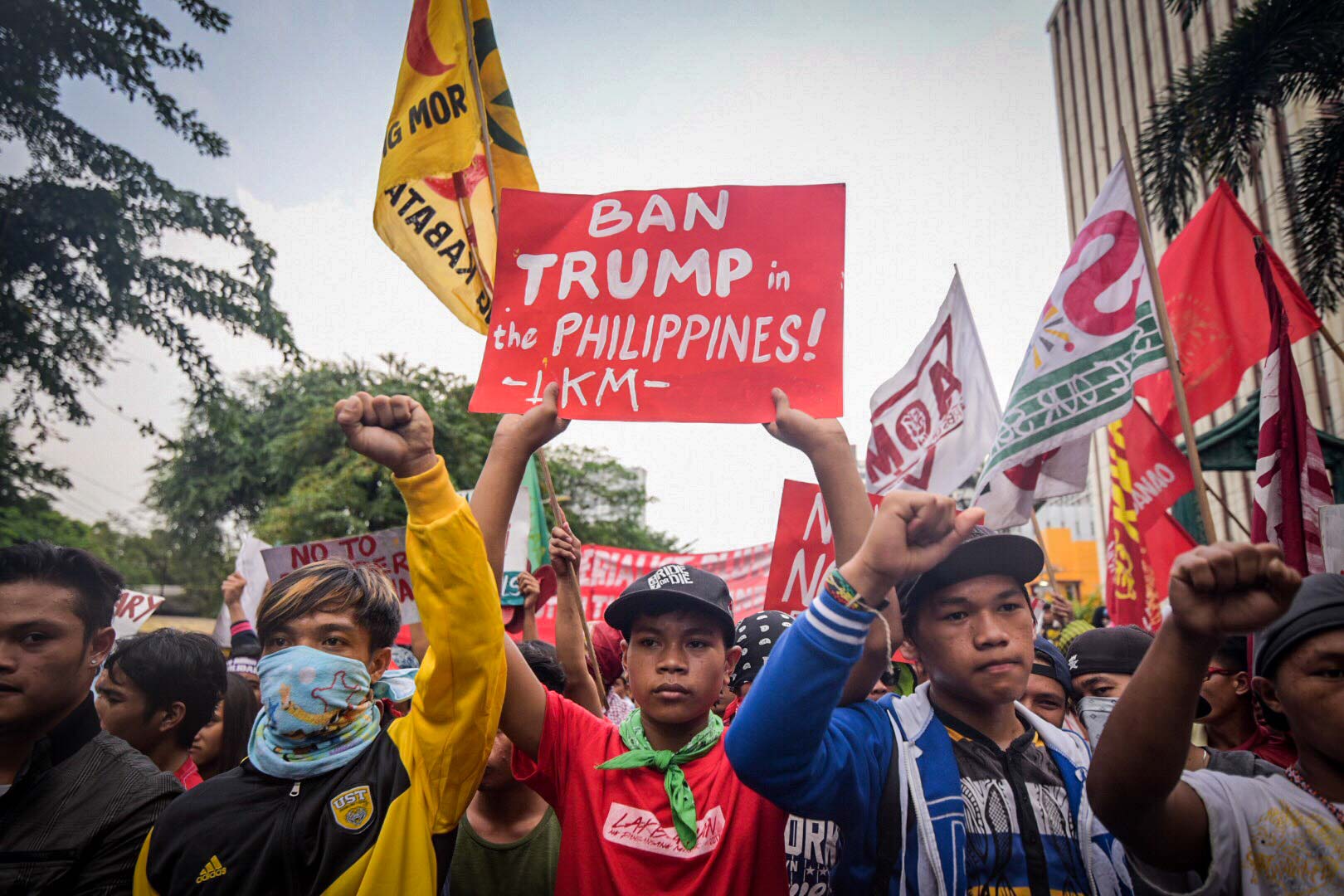 Militant groups are also protesting against the plan of the US government to fund the administration’s campaign against illegal drugs.

The Karapatan Alliance for the Advancement of People’s Rights slammed the Trump administration for “funding” the administration’s war on drugs despite reports of human rights violations.

According to Karapatan secretary-general Cristina Palabay, the US gave the Philippines $9 million for the war on drugs and $47.5 million as military aid for 2017, citing US Congress budget documents.

“Next year, the US is allocating $111 million as military assistance to the country, primarily for the implementation of counterinsurgency program Oplan Kapayapaan, while $7 million will be given to the anti-illegal drug campaign,” Palabay said.

This was echoed by Samahan ng Progresibong Kabataan (SPARK), raising doubts over what many observers have speculated, that Trump will confront Duterte on the spike of extra-judicial killings associated with the government’s “war on drugs.”

“Both Trump and Duterte are not only similarly bombastic but also openly abhorrent of all human rights… Like Trump’s anti-immigrant policies and pronouncements which has also victimized American youth, Duterte’s war on drugs is just a decoy to hide their lack of intent to bring about meaningful change,” Joanne Lim of SPARK said.  – Rappler.com