LOOK: Activists to burn Trump effigy on day one of ASEAN Summit 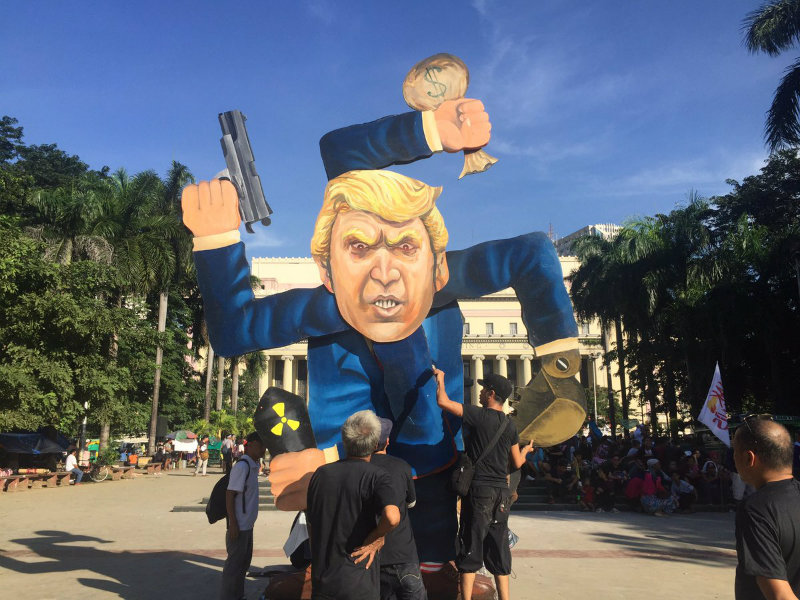 MANILA, Philippines – The militant group Bagong Alyansang Makabayan (Bayan) unveiled a 13-foot effigy of US President Donald Trump that it plans to burn on the first day of the Association of Southeast Asian Nations (ASEAN) Summit and Related Meetings in Manila.

Created by the artist group Ugat Lahi, the effigy features Trump with 4 arms resembling the Nazi swastika, a symbol of auhoritarian rule, hatred, and anti-Semitism. Trump has long had a following among white supremacist groups attracted to his nationalist rhetoric on immigration and other hot-button issues.

“In his own country, Trump has been described as fascist and has been blamed for the rise of neo-Nazi groups,” Bayan said in a statement.

A caricature of Philippine President Rodrigo Duterte can also be seen crouching behind Trump’s legs.

This 13-ft effigy of US President @realDonaldTrump features him with 4 arms shaped into a swastika symbol. #ASEAN2017 pic.twitter.com/CKmuL48XTO

Trump and Duterte are expected to hold a bilateral meeting on Monday.

This is just one of the many protest actions lined up throughout the ASEAN Summit. Groups are protesting Trump’s visit, the government’s alleged “extravagant spending” in hosting the summit, extrajudicial killings in the country, among other issues.

The government has allowed groups to stage protests during the ASEAN summit week, but protesters not allowed to go near Philippine International Convention Center (PICC) in Pasay City, the main venue of the international summit. (READ: Small group of ASEAN summit protesters reach PICC gate)

Authorities have deployed at least 60,000 security personnel for the international meetings which would bring together heads of the 10 ASEAN member-countries and their allies including the US. The Crowd Disturbance Management (CDM), tasked to deal with the protest rallies, is part of the ASEAN security team. – Rappler.com