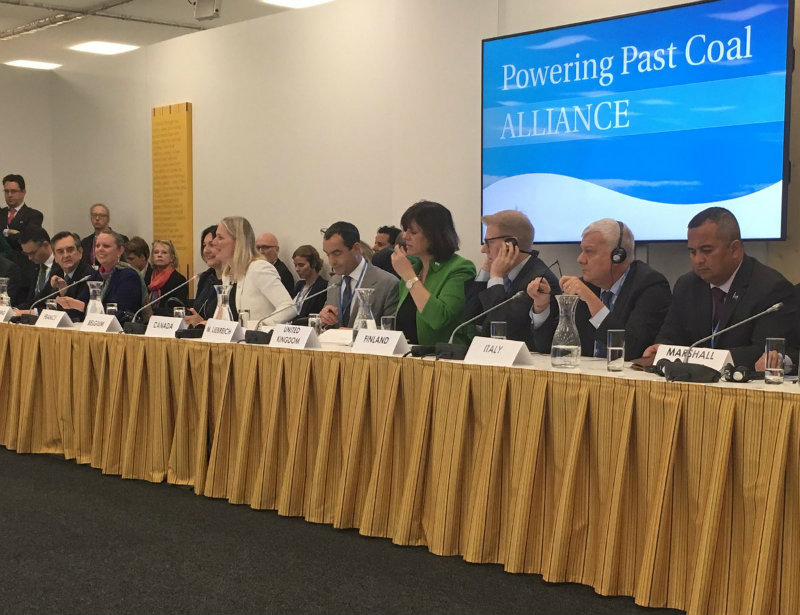 BONN, Germany – Environmental groups called on the Philippines and the Association of Southeast Asian Nations to follow suit as 27 countries and states commit to phasing out coal at the 23rd UN Climate Change Conference (COP23) on Thursday, November 16, in Bonn, Germany.

The Powering Past Coal Alliance, led by the UK and Canada, announced the declaration amid a global effort to curb greenhouse gas emissions to limit global temperature increase as set in the Paris Agreement.

The alliance also includes non-government partners, such as businesses, that pledged to excluding coal as a power source for its operations.

“Reducing global coal consumption should be a vital and urgent priority for all countries and states. Unabated coal is the dirtiest, most polluting way of generating electricity,” said Claire Perry, UK Minister for Climate Change and Industry.

According to a report by Berlin-based climate science and policy institute Climate Analytics, a coal phase-out by 2030 in the EU28 and the OECD and by 2050 in the rest of the world is necessary to meet the climate goals.

Data from the ASEAN Center for Energy (ACE) showed that coal is also projected to rise in the whole ASEAN region from 47 gigawatts (GW) in 2013 to 261 GW in 2035, making up to 55% of the region’s electricity generation.

The region’s energy demand is growing twice as fast as China, according to the World Energy Outlook 2017 report by the International Energy Agency (IEA) released Tuesday, November 14.

“Fifteen percent of the new coal-fired power plants will be in Southeast Asia. We are going into the opposite direction in the global decline. We need to stop building new coal fired power plants, for the benefit of the local communities who suffer from its adverse impacts,” said Wanun Perpimbul, Director of Climate Watch Thailand.

Nithi Nesadurai, Regional Coordinator of Climate Action Network Southeast Asia (CANSEA), noted that, with the increasing trajectory of coal use in all ASEAN countries, “we need to exert serious pressure to intervene to phase out coal in the region.”

“All our countries have committed to the Paris Agreement and to a low carbon development pathway, so there’s no excuse to move away from coal like the rest of the world,” he added.

“By working together in removing barriers and addressing cross-border issues on utilizing renewable resources, the ASEAN can enhance its understanding of and implement a transition to renewable energy,” remarked Fabby Tumiwa, Executive Director of Jakarta-based think tank Institute for Essential Service Reform.

Coal on the rise

Data from the Department of Energy (DOE) showed that coal dominates the Philippines’ energy mix, making up approximately 45% of the country’s total power generation. It is projected to increase over the next few years to address a growing energy demand. (READ: Climate group calls on ASEAN leaders to shift to renewable energy)

But Rodne Galica of the Climate Reality in the Philippines said there is reason to hope.

Riedo Panaligan, Executive Director of the Center for Renewable Energy and Sustainable Technology (CREST), also echoed this and supported the call made by the Powering Past Coal Alliance, urging Philippines to rid of coal.

According to her, transitioning to renewable energy is the future.

“The cost of renewable energy systems, especially solar PV technologies, is dropping every year and it can already compete economically with coal-based energy sources and other fossil fuels,” Panaligan explained. – Rappler.com

Mickey Miguel-Eva, a Climate Reality Leader, is the Regional Campaigns Communications Officer for Asia with the Climate Action Network, a network of about 1,100 NGOs in over 120 countries. He studied BS Geography at the University of the Philippines – Diliman.