Why Lumad groups are camping outside DepEd 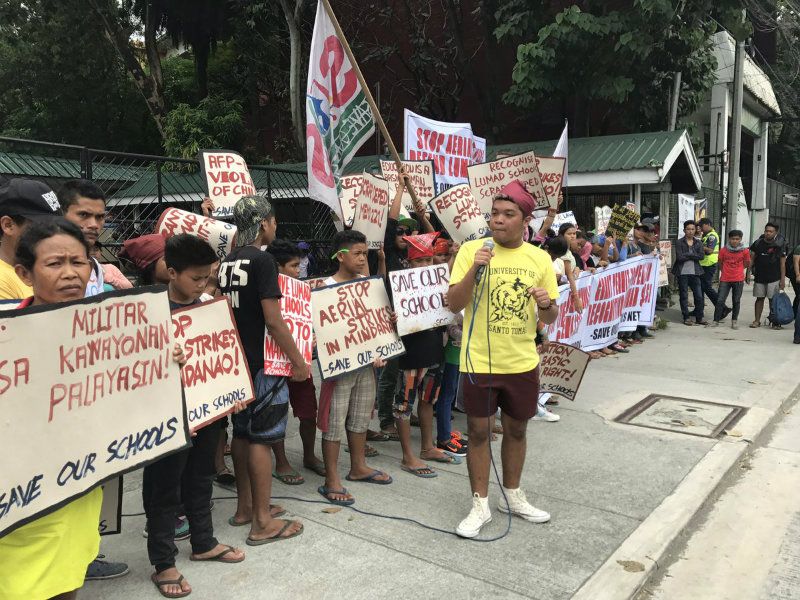 MANILA, Philippines (UPDATE) – Around a hundred Lumad children and members camped outside the Department of Education on Thursday, November 16.

On the narrow sidewalk along Meralco Avenue in Pasig City, Lumad groups set up tarpaulins and mats in a bid to call on DepEd Secretary Leonor Briones to recognize all Lumad community schools in Mindanao and condemn supposed military attacks against schools for Lumad.

They are planning to camp out on the sidewalk for at least a week or until their appeals are heard.

“As the executive in this department, Sec. Briones has the power and authority to facilitate the immediate release of the permits of these schools,” Rius Valle of Save our Schools Mindanao said.

According to Valle, over a hundred Lumad schools are still processing permits to operate.

In an interview with reporters, Briones said there is no problem with the permits so long as the schools applying for them go through the process required by the education department. Briones added that Undersecretary Alberto T. Muyot personally went to Cotabato in the past week to look into this problem.

In fact, there are at least 2,900 schools in the Philippines that cater to more than 2.9 million indigenous students. All of these schools went through the proper process to secure permits.

There are no exemptions to the process, according to Briones.

“We apply the same policy to all schools which they should comply with. If they are not registered, we cannot monitor them,” the education secretary added, citing the case of Madrasah or Muslim schools in the country.

“Nearly every mosques has a Madrasah school. They follow the curriculum. They teach Arabic. They teach the Islamic faith but at the end of the day, the child is able to apply to other schools if the child wants to,” Briones added.

Aside from securing permits, the Save our Schools Network is also calling for the condemnation by the education department of the attacks, given the “continuing military attacks on almost all over 200 Lumad schools in Mindanao.”

“Sec. Briones should issue a statement condemning military attacks on schools and investigate the allegations of connivance of DepEd regional offices with the military in closing down Lumad schools in Mindanao,” Valle reiterated.

Responding to this, DepEd said that it maintains and honors its commitment to leave no learner behind. “The Department has and will never condone activities that imperil the security of its learners, teachers and personnel, and enjoins all education stakeholders to commit in enforcing the same,” DepEd said in its statement.

DepEd also said that the education secretary has been campaigning that all schools in the Philippines must be respected as zones of peace.

Lumad groups, led by the Save our Schools network, have been struggling to raise awareness about the plight of Lumad children since July. According to them, the extension of the declaration of martial law early in July has displaced hundreds of students in Mindanao.

They even wrote letters addressed to President Duterte in a bid to stop martial law in their hometowns. But these calls fell on deaf ears.

Some 3 months since they came to Metro Manila to raise awareness about their plight, the Lumads have still not gone home. Most of them have no houses to go back to. – Rappler.com