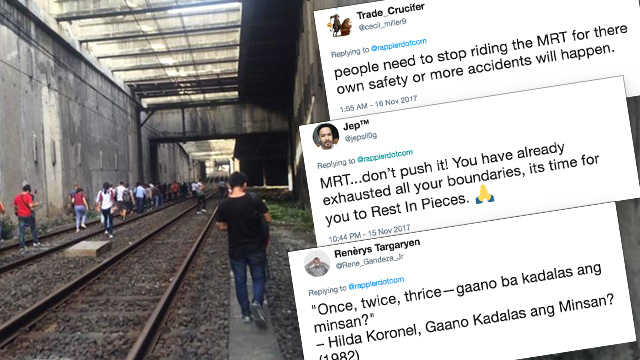 MANILA, Philippines – With glitches and technical issues now a part of the daily commute on the Metro Rail Transit Line 3 (MRT3), netizens who ride the train line vented their concerns and frustrations on social media.

The Service Status section of the DOTr MRT3 website shows daily technical issues that had disrupted train operations as well as the schedule of its riders.

On Friday morning, November 17, barely an hour after the Department of Transportation (DOTr) assured the public that the MRT3 maintenance team is “working overtime” to keep the trains running smoothly, passengers were again unloaded at the southbound track of the Santolan Anapolis station because of a technical problem.

The day before, MRT passengers were offloaded and forced to walk from the Ayala Station to the Buendia Station after a train car was decoupled from the train body.

On Tuesday, November 14, a passenger lost her right arm in an accident at the Ayala Station. Her arm has since been successfully reattached after hours-long of operation.

The daily glitches, according to MRT commuters, are no longer acceptable. Some of them took to social media to share their most horrible experience on the train. (READ: MRT and the violence of our mass transport system)

Their experiences range from accidents, mugging, long lines, and jampacked coaches. Here are some of them:

Facebook user Charlie Columna, who has been taking the MRT for over a decade now,  witnessed its slow and agonizing deterioration. He also noted that this was the result of the failures of previous administrations to address the problem. (READ: Going beyond #MRTChallenge)

“If you were handed over a terminally-ill patient who wasn’t given proper medical care by its previous doctors, the only thing you can do is ease its pain until it’s time for him to go. At the MRT’s current state, no amount of patching up or Band-aid solutions will make it run smoothly,” Columna said.

On Twitter, some netizens even borrowed famous movie lines that reflected their sentiments about the MRT.

Some just can’t help but feel pure disgust with the daily train malfunction.

There are people behind running the mrt. To them, quit your jobs! All of you do not have the right to be there and get paid!

Just like what that usec said the other they, MRT is improving. From 'tirik' 2 to 5 times per day, now somebody had her arm cut and now a detached 'bagon'. He should stop bragging about MRT 'improvements'

Many are asking when – if at all – the good, clean, and professional-looking MRT of the early 2000s will ever make a comeback. – Rappler.com

What do you think about our transport system? Share it on X