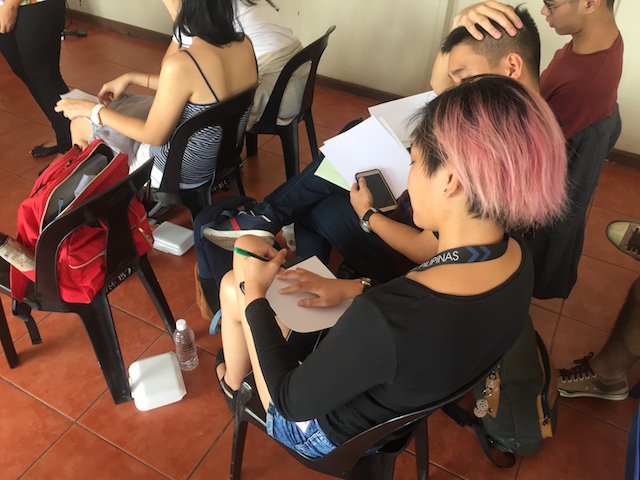 MANILA, Philippines – Students from different universities and organizations gathered on Wednesday, November 22, in the University of the Philippines (UP) Diliman to launch a campaign that urges legislators to back a proposal to increase tobacco tax. (READ: EXPLAINER: Senate, House versions of the tax reform bill)

They wrote letters to undecided senators, hoping to convince them to support the move to raise the levy on so-called “sin” products, especially tobacco. In October 2017, Senator Manny Pacquiao filed Senate Bill No 1599, which seeks to amend Republic Act 10351 or the Sin Tax Reform Act of 2012 aimed at generating more government revenue. The young people went to the Senate on Wednesday afternoon to hand their letters to the legislators.

“For the past months, we went to the Senate building, knocked at the senators’ offices, and used the reach of social media to deliver our appeal,” Joel Estoesta of the Pamantasan ng Lungsod ng Maynila Economics Society said.

President Rodrigo Duterte earlier vowed to overhaul the country’s tax code as part of his economic program. He called on the Senate to “support the tax reform in full and to pass it with haste.”

The bill proposes to increase the present unitary excise tax rate to P60 from P30 per pack. The annual excise tax will also be increased from 4% to 9% (READ: Pacquiao wants to increase cigarette tax to P60 per pack)

Senate Committee on Ways and Means chair senator Juan Edgardo Angara has not yet expressed commitment to back the bill, according to the young advocates. Meanwhile, Senator Risa Hontiveros has included tobacco tax increase in her proposed amendments to the proposed measure. The rest of the senators are still undecided on the issue.

“It is of utmost importance that this measure be included in the first package expected to be passed this year. Failure to do so is tantamount to blocking this reform altogether,” UP Economics Towards Consciousness president David Baldivia said.

Pacquiao said that the passage of the measure will at least add P60 to P70 billion to government revenues.

According to UP Economics Towards Consciousness president David Baldivia, adding tobacco tax into the package will generate around P50 billion in additional funds “that can be used by the government to improve healthcare in the country.

“The evidence is clear. There is no excuse not to prioritize the passage of this measure. The ball is now in the Senate’s hands to choose the welfare of the people over the corporate interests. One thing is for sure, the youth is watching,” he added.

“One of our movement’s main calls is to include tobacco tax in the current tax reform package being discussed in the Senate.

The group Youth for Sin Tax also launched a zero vote media campaign to “reject and give zero votes to senators running in 2019 elections who will block the proposal to include tobacco tax increase in tax reform bill.”

The 2019 senatorial elections is fast approaching and according to UP Diliman University Student Council chair Benjie Aquino, “those who side with corporate interests over the welfare of the youth do not deserve the votes of the youth in 2019.” Incumbent senators who are eligible for reelection include Francis Escudero, Gregorio Honasan, Loren Legarda, Aquilino Pimentel III, and Antonio Trillanes.

“Individually, we may seem small compared to these corporate giants, but together our voices will be the key towards changing the political landscape in the country into something better,” he said. – Rappler.com