What happened to the centennial Bonifacio monument in Taguig? 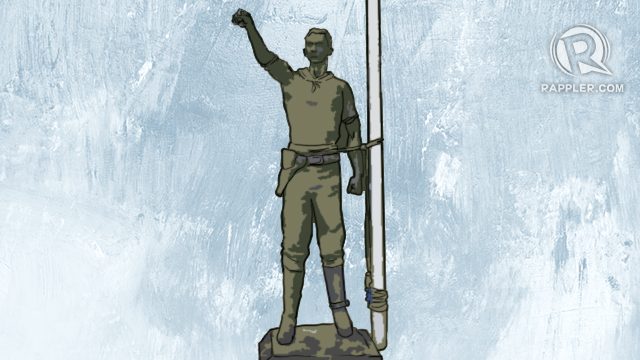 MANILA, Philippines – They paved a monument to put up a new road.

More than a week before the commemoration of Bonifacio Day on November 30, the Department of Public Works and Highway (DPWH) toppled the centennial monument of Philippine hero Andres Bonifacio in Taguig to give way for a road project linking the bustling business districts of Taguig and Ortigas.

In a photo taken by Inquirer, the monument was seen plucked from its podium and tied to a post.

According to news reports, however, DPWH did not consult or seek approval from the National Historical Council of the Philippines (NHCP) prior taking down the statue.

DAKILA, a group aimed at sparking “social consciousness formation towards social change,” condemned the move, saying that it is telling of how “our government honors our heroes who fought for our freedom.”  The artist-activist group also said that monuments like that of Bonifacio’s do not only serve as mere decorations but also as a reminder of their historical significance in the country’s fight for its freedom.

“This is why we keep on striving to remind the public especially the youth, of the importance of learning about our history and our heroes. Our heroes’ stories are not fables or fiction but are living examples of how to live our lives especially at these times of social unrest and repression,” DAKILA Communications Director Cha Roque said.

The monument was inaugurated in 1997 as a state memorial for the centennial death anniversary of the supremo of Philippine Revolution, Andres Bonifacio.

‘It will be taken back’

According to Anna Mae Lamentillo, the Chairman of the DPWH Build Build Build Committee, the Bonifacio statue will be restored at its exact position after the completion of the road project.

“The construction of the BGC – Ortigas Center Link Road Project is on full blast and may damage the statue of Andres Bonifacio so we had to protect it,” Lamentillo said.

She added that the project would reduce travel time from Fort to Ortigas from 1.5 hours to only 20 minutes. She also said that DPWH is already coordinating with NHCP with regards to the safekeeping of the statue.

As the governemnt agency that is primarily responsible for the conservation and preservation of the country’s historical legacies, NHCP set definite guidelines on relocating monuments of heroes and other illustrious Filipinos. A monument cannot be relocated if it falls under any of the following conditions:

DPWH unveiled the P1.6 billion project early in July 2017 and announced that it involves the construction of a 4-lane Sta Monica to Lawton Bridge across Pasig River connecting Lawton Avenue in Makati City and Sta. Monica Street in Pasig City and a viaduct structure traversing Lawton Avenue onwards to the entrance of Bonifacio Global City.

“Once completed by March 2020, travelling between the central business districts of Taguig and Pasig Cities will only take 12 minutes and traffic congestion at EDSA and C-5 Road particularly along Guadalupe Bridge and Bagong Ilog Bridge will be alleviated by about 25 percent,” DPWH Secretary Mark Villar earlier said.  – Rappler.com