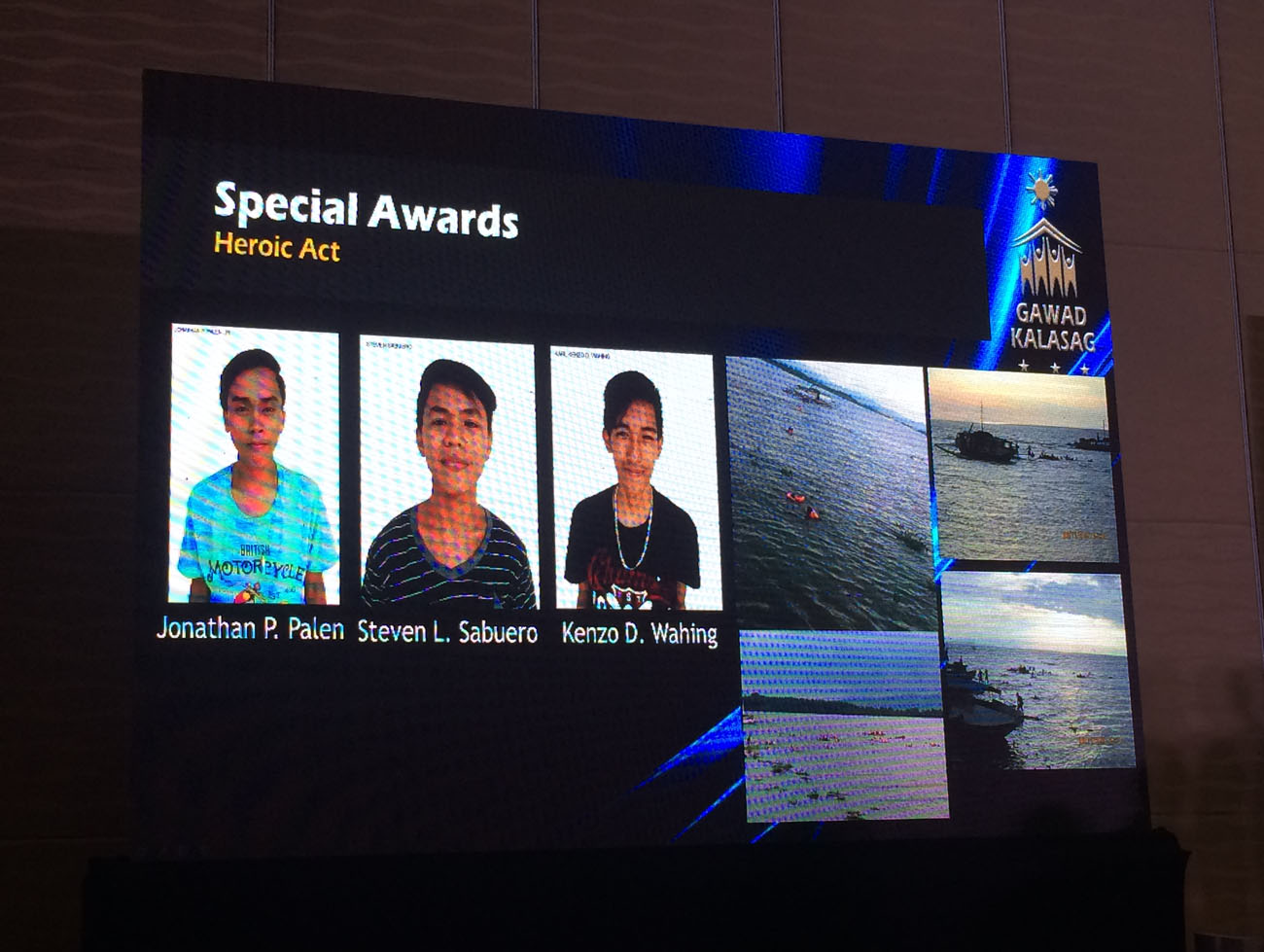 MANILA, Philippines – What 3 teenagers thought was a fine, normal Saturday in Agusan del Norte turned out to be the most unforgettable moment  of their lives.

Jonathan Palen, 19, Steven Sabuero, 15, and Kenzo Wahing, 18, acted fast to save drowning passengers when the MBCA Jay 2 pumpboat sank while on its way to Magallanes Port, Agusan del Norte on June 11, 2016.

According to Agusan del Norte Police Provincial Office, the MBCA Jay 2 which departed from Butuan City port sank when the boat captain made a u-turn to dock at the Magallanes Port in Agusan del Norte. The pumpboat’s sudden turn caused the engine breakdown, resulting to water rapidly filling the boat’s rear.

A Facebook page Biliran Island posted a video of the incident. As of posting, the video has 5,300 views.

Because of what happened, the 3 were given the Gawad Kalasag Heroic Act award on December 11, at Crowne Plaza Manila during the 19th Gawad Kalasag Awarding National Awards.

Sabuero was one of the passengers of the boat. He shared that before they left the port, he noticed that the boat was overloaded with passengers. Worse, they were not advised to wear any life vest.

(The passengers kept on transfering seats because of the waves, making the boat unbalanced. Then the boat engine stopped, they said the machine got wet because of a hole in the boat)

That was why when the boat started to sink, passengers began to panic, Sabuero remembered.

(I immediately grabbed a life jacket for my mom and sister, I told them to jump out of the boat. When I saw an empty plastic gallon of water, I gave it to my mom to help her float.)

Sabuero said he decided to jump into the water after seeing a young girl drowning.

(Then I saw a girl drowning, I swam right away and gave her also an empty gallon, then I also gave life jackets to other passengers until the rescuers came.”

Wahing and Palen happened to be near the shore that time. Without thinking twice, the the two quickly swam towards the other drowning passengers as soon as they saw the boat sinking.

Since its inception in 1998, the Gawad KALASAG award has been bestowed to 220 Local DRRM Councils, 74 National Government Organizations, 35 individuals and 27 groups/institutions, while 36 winners have been conferred with a Hall of Fame Award. – Rappler.com