LOOK: ‘Circulatory’ and ‘skeletal’ maps of the Philippines 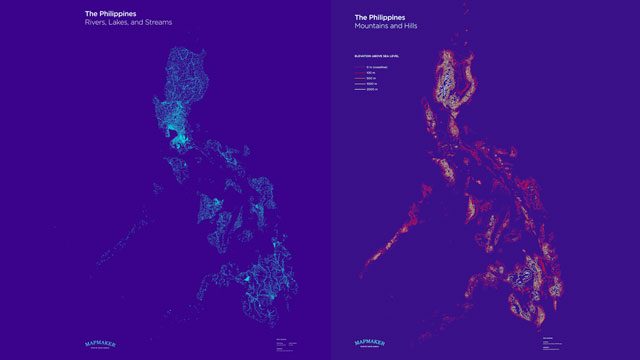 MANILA, Philippines – What do the country’s “circulatory” and “skeletal” maps look like?

Geographer and cartographer David Garcia gave the public an idea with two maps he posted on Sunday, December 17.

“It’s a way for me to share the little I know about maps by helping people understand geographic issues, especially in relation to urban planning and disasters by using arts, science, and a bit of persuasion in the map-making process,” David Garcia said in an interview.

The first map, which he calls the “skeletal map” of the Philippines, plots the mountains and hills across the archipelago and shows their level of elevation from the coastline.

The second map, which he aptly calls the “circulatory” map of the Philippines, shows the rivers, lakes, and streams that circulate around the country.

The thicker blue lines depict the main channels of the major river basins of the country.

According to Garcia, he created the two maps “to show the distribution of topography and hydrography of the Philippines.”

“Usually, Google Maps is flat and does not highlight those physical features. So I highlighted the elevation and water layers just to raise awareness about physical geography – which is an influence to how our cities and towns experience geohazards,” Garcia added.

This is not the first time Garcia posted different versions of the Philippine map. He has advocated the use of maps in addressing disasters and climate change.

While there are virtually thousands of maps available online, what makes Garcia’s works different is their aim to inform and effect social change.

“The key there is I would like to share with people useful, beautiful, truthful maps that help make a point because I think mapping is also for social change,” Garcia said.

Presenting maps in an aesthetically-pleasing way also matters to the young cartographer, who wants to help spread awareness on the significance of map making.

According to him, social media has helped a great deal in reaching more communities with this message.

“When I go to the communities, it really takes time to explain to them the technical side of mapping. I was thinking: ‘What if i can help spread the messages through social media, considering that we don’t have enough time to talk to many people at the same time?'” Garcia said in mixed Filipino and English.

To his delight, his efforts on social media have been met with interest. For example, his posts about the circulatory and skeletal maps of the Philippines have so far garnered 1,000 reactions as of posting.

His most viral post about the 100 largest islands in the Philippines has been shared over 1,600 times and received more than 4,400 reactions as of posting.

Garcia has also made all of his maps on Mapmaker, easily downloadable to spread awareness. – Rappler.com

You can support his work by liking his Facebook page called Mapmaker.