What LGUs should do before Vinta’s landfall 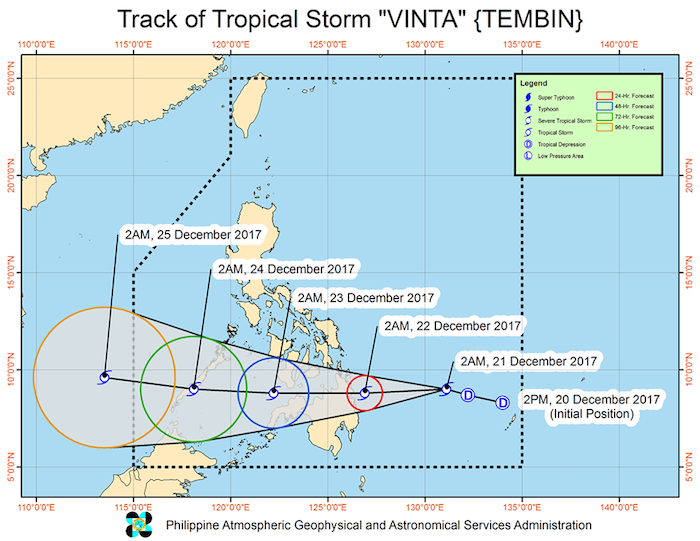 MANILA, Philippines (UPDATED) – To prepare for the landfall of Tropical Storm Vinta (Tembin), the Department of the Interior and Local Government (DILG) raised alert level Charlie over 23 provinces on its path, as of 5:45 pm on Thursday, December 21.

The alert level was raised after a low pressure area strengthened into a tropical storm before its landfall. (READ: EXPLAINER: How tropical cyclones form)

According to the DILG-Central Office Disaster Information Coordinating Center (CODIX), the following provinces will be within the 100-kilometer radius of Vinta’s forecast track. Residents in these areas should expect moderate to heavy rainfall:

Alert level Charlie is based on Oplan Listo, a disaster preparedness manual that provides local governments with a checklist of things to do before, during, and after typhoons. (READ: FAST FACTS: Tropical cyclones, rainfall advisories)

This checklist seeks to “minimize mistakes that may cost lives and grave destruction to properties.”

It includes flowcharts that correspond to 3 phases of critical preparedness actions – Alpha, Bravo, and Charlie. It also provides a tropical cyclone information board, reference boxes, and minimum actions to guide mayors.

The following provinces fall within the 125-kilometer radius of Vinta’s forecast track:

DILG-CODIX also raised alert level Alpha over 5 provinces that fall within the 175-kilometer radius of Vinta:

In a bulletin issued 5 am on Thursday, state weather bureau PAGASA said Vinta packs maximum winds of 65 km/h, increasing from the previous 55 km/h.

Based on its latest forecast track, Vinta is expected to make landfall in the Surigao del Sur-Davao Oriental area between Thursday evening and Friday morning, December 22. It is expected to leave the Philippine Area of Responsibility on Sunday, December 24, after crossing Caraga, northern Mindanao, the Zamboanga peninsula, and southern Palawan.

The National Disaster Risk Reduction Management Council (NDRRMC), in a previous press conference, already advised the public to prepare again for Vinta’s possible landfall, especially that many areas in Visayas and Mindanao are still reeling from tropical storm Urduja.