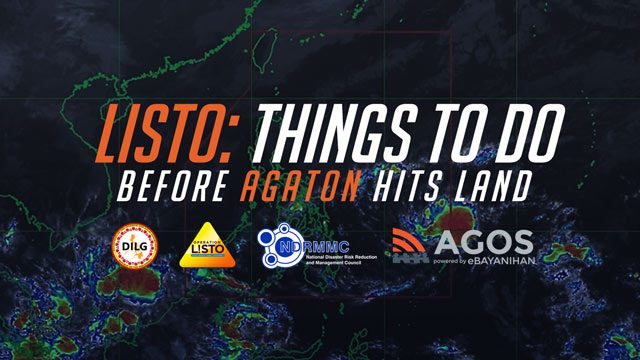 MANILA, Philippines – On New Year’s Eve, December 31, the National Disaster Risk Reduction and Management Council (NDRRMC) urged residents in areas to be affected by the possible first storm of 2018 to prepare and prioritize their safety.

“We are expecting the Low Pressure Area (LPA) which has entered the Philippine Area of Responsibility (PAR) to develop into a storm tomorrow, January 1, or on January 2. It will be named Agaton,” NDRRMC spokesperson Mina Marasigan told media in Filipino on Sunday, December 31.

Pagasa warned that the LPA or tropical depression is expected to bring moderate to heavy rain to Mindanao from Monday to Tuesday, January 1 to 2, so residents there should brace for possible flash floods and landslides. (LOOK: Philippine hazard maps online)

“We are calling on the public not to ignore the warning because the rain might be disastrous in affected areas. Make sure that you and your families are prepared,” Marasigan said in Filipino.

Marasigan noted that the LPA is expected to bring rain to the same areas that were hit by Tropical Storm Urduja (Kai-tak) and Severe Tropical Storm Vinta (Tembin).

Mindanao is still reeling from Vinta, which hit land just a few days before Christmas as a severe tropical storm. Vinta left at least 240 people dead. It also came on the heels of Urduja, which battered Eastern Visayas and left at least 47 people dead.

Marasigan implored to residents to be affected to stay vigilant and follow the orders of local government officials in their respective areas. (READ: Quick links: Preparing yourself, your family and home for disasters)

“Evacuation orders by local government units are critical to ensuring your safety and your family’s,” Marasigan said in Filipino.

Before typhoons strike, LGUs are advised to follow measures outlined in the Department of the Interior and Local Government’s (DILG) Oplan Listo.

Oplan Listo uses a disaster preparedness manual that provides mayors and other local government disaster management agencies a checklist that enumerates what should be done before, during, and after typhoons.

The manual includes flowcharts that correspond to 3 phases of critical preparedness actions – Alpha, Bravo, and Charlie. It also contains a tropical cyclone information board and minimum actions to guide mayors.

The 1991 Local Government Code and the Philippine Disaster Risk Reduction and Management Act of 2010 mandate local government units to be on the frontline of emergency measures during disasters. – Rappler.com

Check if your mayors are taking these minimum preparedness activities that LGUs should be enforcing in areas expected to be affected by Agaton. Tell us how prepared your LGUs are through email (move.ph@rappler.com) or Twitter (@moveph).

Stay alert and ready with the latest weather and disaster information through Agos.