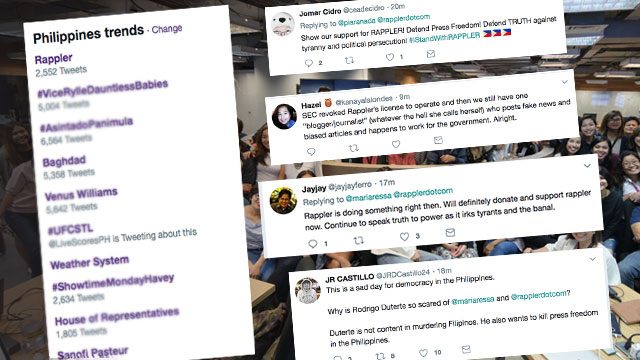 Facebook Twitter Copy URL
Copied
For many netizens, the order of the Securities and Exchange Commission to revoke Rappler's registration is a blatant attack against press freedom and freedom of speech

MANILA, Philippines – The decision of the Securities and Exchange Commission (SEC) to revoke Rappler’s registration for allegedly violating the Constitution has sent chills throughout social media on Monday, January 15.

“Rappler now. Who’s next? Everyone is not safe unless you play along, but what happens to democracy if and when everyone plays along to whoever is in the administration,” Twitter user @_LittleRedShoe said in a post.

As of posting, the word “Rappler” topped the trending topics in the Philippines, racking more than 17,000 tweets.

The SEC’s kill order revoking Rappler’s license to operate is the first of its kind in history – both for the Commission and for Philippine media. (READ: Stand with Rappler, defend press freedom)

In SEC’s order, it focused on the company’s Philippine Depositary Receipts (PDR) from Omidyar Network, saying that it violates constitutional restrictions on ownership and control of mass media entities.

“The En Banc finds Rappler, Inc. and Rappler Holdings Corporation, a Mass Media Entity and its alter ego, liable for violating the constitutional and statutory Foreign Equity Restriction in Mass Media, enforceable through laws and rules within the mandate of the commission,” the order said.

For netizens, this move is a blatant effort to silence the press for its critical reporting against the government.

“Like Hungary’s populist PM Viktor Orban, Duterte is waging a war against critical journalists. The attack against #PressFreedom is escalating,” UP Manila Prof Cleve Arguelles said in a Facebook post.

Meanwhile, the arts and media alliance Let’s Organize for Democracy and Integrity (LODI) held President Rodrigo Duterte accountable for what they described as “an open attack on the people’s rights to free expression and to a free press.”

“Who is next, Mr President? ABS-CBN? The community journalists tagged as communistsd? The artists who expose your bloody drug war?” the group said in a statement posted on social media.

The order came after President Duterte himself blasted Rappler in his second SONA in July 2017.

Below are some of the Twitter posts which used the hashtags #IStandWithRappler, #SupportRappler, and #DefendPressFreedom:

'I stand with Rappler' – Curated tweets by MovePH

I stand by Rappler. This is about defending press freedom. I will write about this on @blogwatchdotph

In its statement, Rappler said it will go through all legal processes available to the company to fight the kill order.

Journalists’ organizations, as well as lawmakers, also issued statements of support for Rappler, all condemning  the SEC decision as an attack on press freedom. – Rappler.com