MANILA, Philippines – During the second Senate probe on the proliferation of ‘fake news‘ Senator Manny Pacquiao wanted the government to license bloggers and ‘control’ the media.

Imposing a legislative solution on such is ‘dangerous’ as loose legal definitions can be argued by the government to incarcerate journalists, said former Al Jazeera correspondent Peter Greste, who was arrested by the Egyptian authorities for terrorism-related charges for his work as a journalist in 2013.

“Going back to the days of pre-social media, if the government lied, the journalists acted as gatekeepers. We not only have the ethical and professional responsibility, but also a commercial incentive to cross-check and call out their lies,” said Greste, now a journalism professor at the University of Queensland.

Greste was one of the panelists of the Democracy and Disinformation Forum at the Ateneo de Manila Rockwell Campus in Makati on Monday, February 12.

Educators Cheryll Ruth Soriano, chairperson of De La Salle University’s Department of Communication, and Jean Encinas-Franco of UP Diliman’s Department of Political Science were also part of the panel. 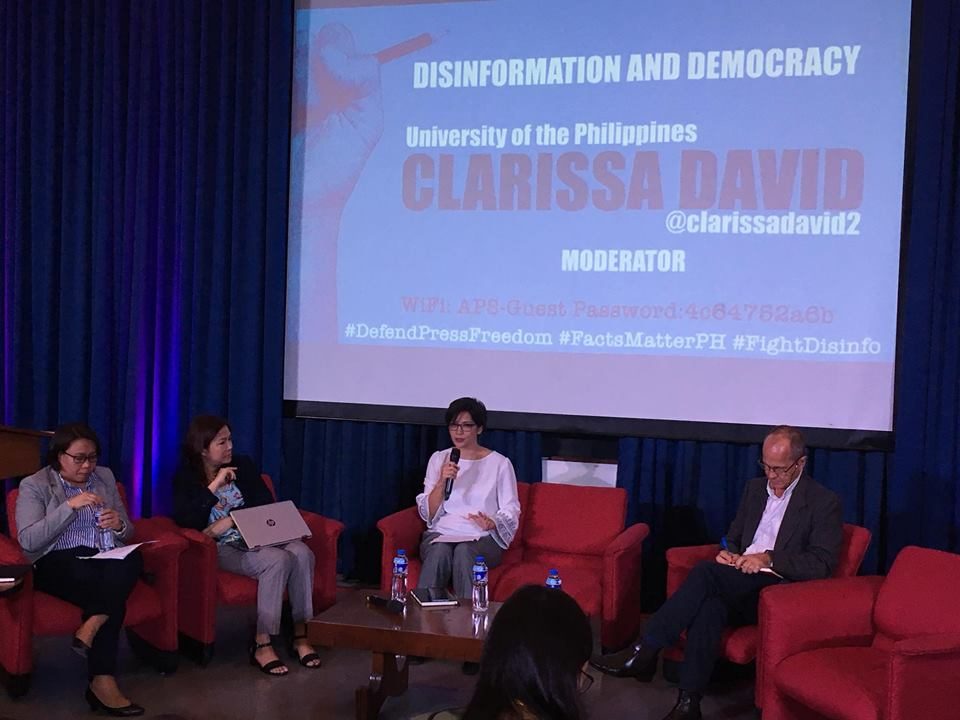 Greste also said social media empowered people to the point that it created ‘direct pipelines’ to supporters of politicians, skipping the essential fact-checking, enabling echo chambers. (READ: How we do our fact-check)

“This is precisely what we wanted. Advancing e-governance and participation … we wanted [the public] to have a direct access to politicians and government officials and be transparent,” Soriano argued.

Soriano noted, however, that what should be questioned is whether the use of such platforms is in good faith.

Soriano also said that now with social media tools, political machinery can measure the efficacy of their propaganda amplification, making it more challenging to fight. (READ: What is Mocha Uson’s top source of news?)

The panel agreed that the solution that can be done against ‘fake news’ is through good and strong journalism as it should keep government officials accountable and honest.

Clarissa David, a professor at the University of the Philippines’ College of Mass Communication, moderated the panel “Democracy and Disinformation.” – Rappler.com