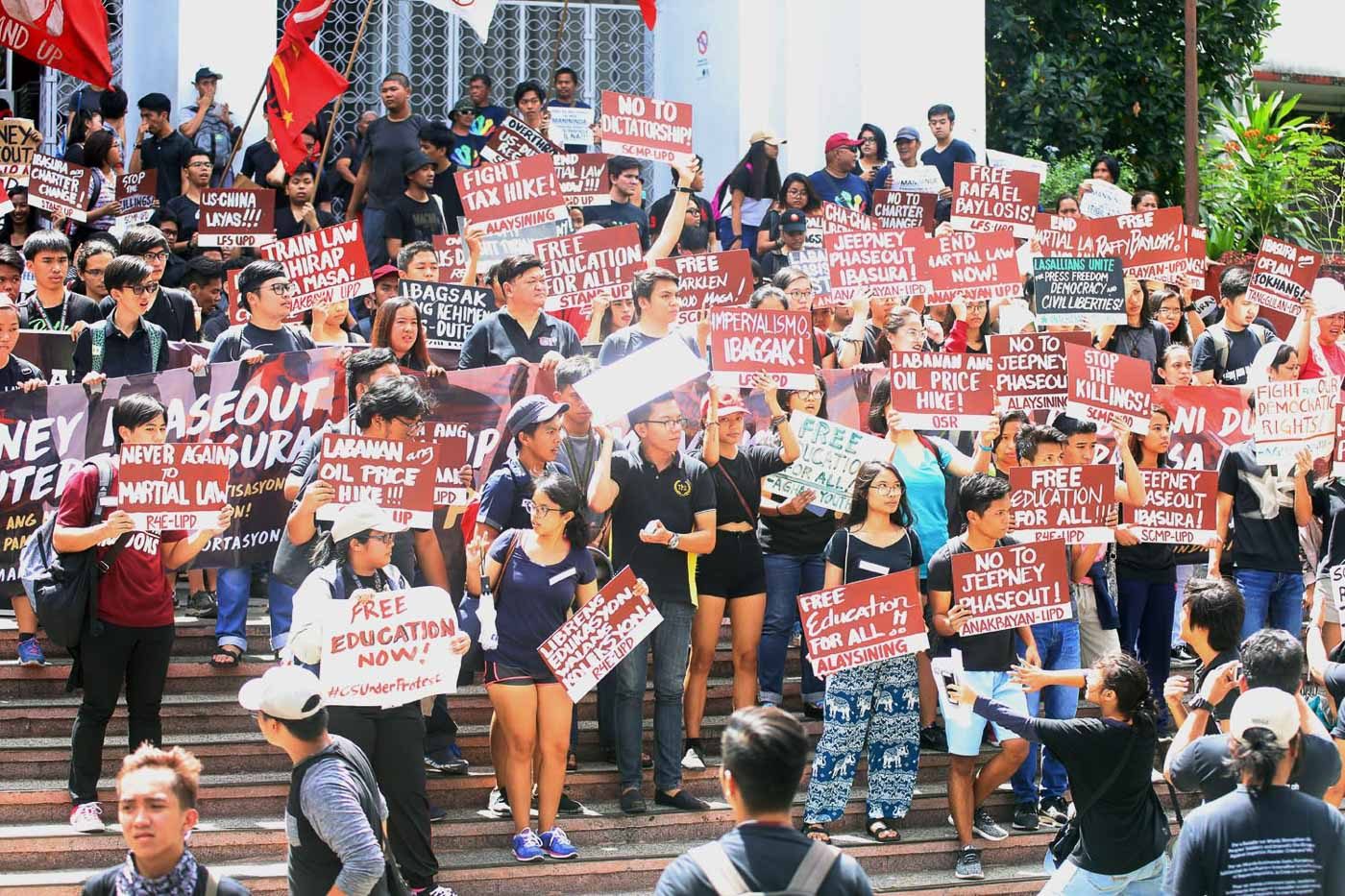 MANILA, Philippines – Thousands of Filipinos – mostly youth – took to the streets on Friday, February 23, as their call to uphold human rights and press freedom also created a stir on social media.

The hashtag #WalkOutPh trended Friday afternoon, racking up more 3,000 tweets and reaching at least 2.6 million on Twitter. The College Editors Guild of the Philippines, together with Youth Act Now Against Tyranny, organized a series of protests nationwide to condemn the recent attacks of President Rodrigo Duterte on press freedom and human rights.

“With the intensifying attacks of the current regime against its critics, we encounter student leaders, activists, and dissenters who have found themselves as victims of fake news, personal attacks, trolls and direct harassment of suspected state agents,” Youth Act Now Against Tyranny said in their statement. (READ: Oldest alliance of college editors to stage nationwide protests February 23) “Despite all these, the youth only strengthened the resolve to fight against tyranny and are ready to frustrate a rising dictatorship,” it added.

In Metro Manila, students from different universities started the day with individual activities in their respective campuses before gathering in Morayta, Manila with the rest of the protesters.

At the University of the Philippines (UP) Diliman, the students were joined by vendors and jeepney drivers as they “shut down Palma Hall.”

According to Ikot Jeepney Association president Cesar Sarmiento, they joined the protest to fight against the repressive policies of the administration against the poor, including the jeepney phaseout.

(We want to fight for our rights and our protest against government’s jeepney phaseout. We hope that those in power listen.)

Earlier on Thursday, UP Diliman Chancellor Michael Tan asked professors to excuse students attending the activities and consider it “as part of their education.”

Martial Law survivor Boni Ilagan also talked to students from the College of Mass Communication and advised them to “create their own First Quarter Storm.”

Even a dog joined the protest in UP Diliman!

Students from the University of Santo Tomas also joined the walkout and met with other delegates from different schools at 2pm in Morayta, Manila.

“This is not the time for the youth to drag themselves in fear but to take a stand in these times of turmoil,” the League of the Filipino Students – UST said in a statement.

Below are other social media posts from the nationwide walk-out:

– with a report from Abigail Abigan/Rappler.com