The stories behind the Passion of Jesus 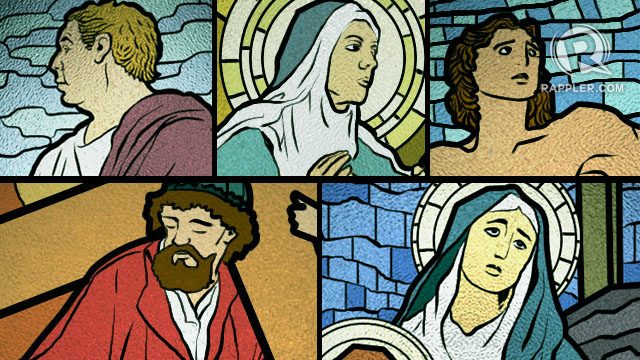 MANILA, Philippines – There are many pivotal characters who fall to the background in the Bible.

In every book, there are characters whose stories don’t get told. The people whose names are only mentioned once and then forgotten in favor of a bigger plot.

Even in the Passion story of Jesus Christ, one of the most important stories told in the Roman Catholic religion, there are several characters who play pivotal roles in the salvation of man and yet, nobody knows much beyond their presence along Jesus’ path to the cross.

We take a look at some of the background characters of the Stations of the Cross story. 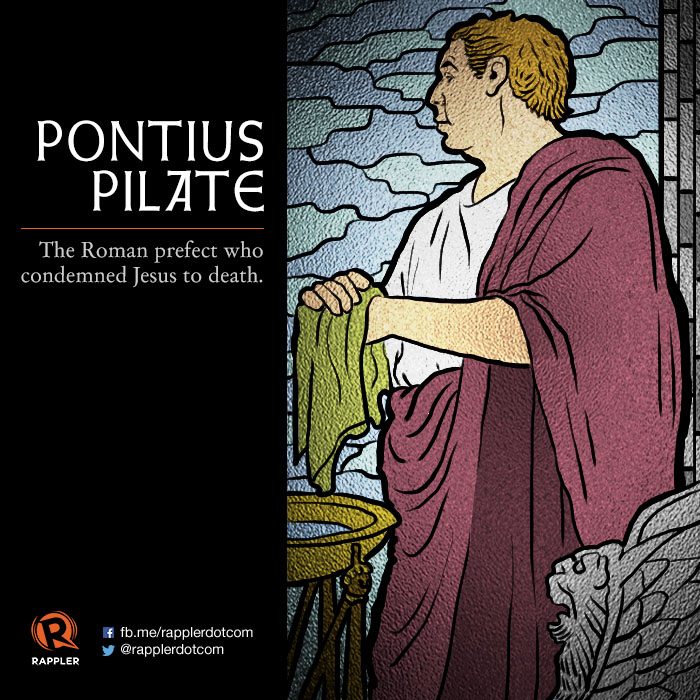 The Stations of the Cross begins with Jesus facing Pontius Pilate for judgement.

Pilate was the 5th prefect to the province of Judea. In all canonical gospels, Pilate is shown as hesitant to pass judgement on Jesus.

The Roman prefect did not find any fault in Jesus despite the clamoring of the crowd that had gathered to witness Jesus’ sentencing. He asks Jesus to defend himself and offers to release him as was traditionally done during the Passover celebrations.

It is even said that Pilate’s wife bade him to have no hand in condemning Jesus, saying, “Have nothing to do with that righteous man, for I have suffered much because of him today in a dream.” (Matthew 27:19)

When he saw that his attempts to free Jesus only provoked the crowd to call for his crucifixion louder, he washed his hands and said, “I am innocent of this man’s blood; see to it yourselves.” (Matthew 27:24) Before having Jesus scourged and sent to be crucified. Barabbas was a ‘notorious prisoner;’ according to the gospels he was locked up for his part in an insurrection in the city and for committing murder during the uprising.

During the judgement of Jesus before Pilate, the Roman prefect offered to release Jesus as part of the Jewish Passover tradition, however, the crowd called for the release of Barabbas instead.

When Pilate washed his hands of the responsibility of Jesus’ condemnation, the crowd chanted, “His blood is on us and on our children!” (Matthew 27:25) Simon is highlighted in the 5th Station of the Cross, after Jesus falls the first time.

When Jesus was made to carry the cross to Golgotha (which means “the place of the skull”), the guards pulled in a man who was from Cyrene who, according to the gospel of Mark, was on his way in from the country.

Not much is said about Simon except that he is the father of Alexander and Rufus. Saint Veronica is not mentioned in the Bible, however she is known through Roman Catholic tradition for her actions in the 6th Station of the Cross.

It is said that she is one of the women who followed Jesus on his way to Golgotha and offered him a cloth with which to wipe his face which was dripping with sweat and blood.

Tradition states that Jesus’ face left a slight imprint on the cloth.

She was canonized a saint pre-congregation and her feast day is celebrated on July 12th. Disciple at the Cross

It is not mentioned whether any of Jesus’ Apostles were part of the crowd the accompanied Jesus to Gologtha, but in the Gospel of Matthew, it is said that one disciple stood beside Jesus’ mother at the foot of the cross.

When he saw that they were present during his final moments, Jesus spoke to the disciple, giving him leave to care for his mother from that moment on.

Near the cross of Jesus stood his mother, his mother’s sister, Mary the wife of Clopas, and Mary Magdalene. When Jesus saw his mother there, and the disciple whom he loved standing nearby, he said to her, “Woman, here is your son,” and to the disciple, “Here is your mother.” From that time on, this disciple took her into his home. (John 19:25-27) Soldier at the Cross

There are many unnamed soldiers in the Passion story, but one had a significant role among the others.

It is said that one of those present at the crucifixion heard Jesus say that he was thirsty and so the soldier dipped a sponge into a jar of wine vinegar and used the stalk of a hyssop plant to lift it up to Jesus’ lips for his final drink.

Another soldier who had a significant role in the crucifixion was the man who pierced Jesus’ side after the latter’s death. This soldier has come to be known as Longinus.

His act of wounding Jesus created the last of the Five Holy Wounds of Christ. Crucified along with Jesus were 2 criminals, said to be thieves.

One of the criminals goaded Jesus as they hung on their crosses saying, “Aren’t you the Messiah? Save yourself and us!” (Luke 23:39)

And the other criminal rebuked the first one saying, “We are punished justly, for we are getting what our deeds deserve. But this man has done nothing wrong.” (Luke 23:41)

The second criminal then said to Jesus, “Jesus, remember me when you come into your kingdom.” (Luke 23:42) Mary’s role in the Passion story is highlighted in the 4th and 13th Station of the Cross.

Jesus’ mother, Mary, is one of the most prominent figures in the entire Bible. From before Jesus’ birth until after his death on the Cross, Mary was present and adhering to the prophecy of the Messiah.

When Jesus was taken down from the Cross, he is laid on Mary’s lap and she holds her son’s body, mourning.

This is the scene which inspired Michelangelo’s Pietà statue. According to all the gospels, Joseph of Arimathea was a prominent man in Jewish society, several accounts say that he was a member of the Council aside from being a disciple of Jesus.

After the crucifixion and death of Jesus on the Cross, Joseph approached Pilate to ask the prefect for permission to bury Jesus’ body.

Once the body was cleaned and anointed, Joseph had Jesus wrapped in white linen and laid in a new tomb and then sealed with a large stone.

True, not much is known about most of the people who played key roles in the Passion story of Jesus Christ, however, each one of them was pivotal in the narrative that Catholics believe is what saved humanity from eternal damnation.

Are there any interesting characters in the Bible that you are curious about? If you know any of their stories, write about them on X! –Rappler.com