Apr 27, 2018 8:53 PM PHT
Christiana Claudia Gacuma Gancayco
Facebook Twitter Copy URL
Copied
What made former USLS College of Law dean Ralph Sarmiento believe Mark John Simondo would someday top the Bar? The student's brilliant answer to a 'very complicated problem about the relationship of the bill of rights and the powers of the state' 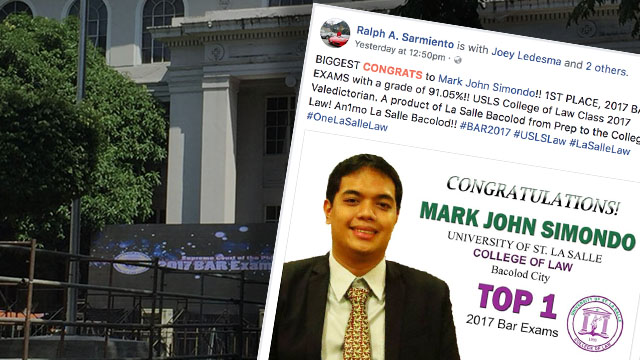 BACOLOD, Philippines – Days before the results of the 2017 Bar exams were announced, and Mark John Simondo emerged with the highest rating, his former professor at the University of St La Salle (USLS) College of Law had already prepared a poster he would publish on social media to congratulate him.

“From the very first day in law school, I already saw his potential,” Ralph Sarmiento, former dean of the USLS College of Law, shared during a press conference Thursday night, April 26.

Sarmiento, who himself placed 10th in the 1997 Bar exams, said his congratulatory post for Simondo was already edited in Photoshop several days before the results were out, “waiting only for the post button to be clicked.”

The law professor said his certainty was sealed during a Constitutional Law 1 lecture, where Simondo gave a brilliant answer to one of Sarmiento’s most difficult questions, which he usually asks his students every year.

“It [was] a very complicated problem about the relationship of the bill of rights and the powers of the state,” recalled the professor. “I think he was really designed and destined to top the Bar,” he added.

From then on, he made sure to monitor Mark’s progress in law school, checking up on him up to the time Mark was about to take the Bar exams.

Sarmiento, who was dead set on making Mark realize his potential, talked to him seriously on his 3rd year and 3 months before the Bar.

“I told him, ‘Mark, I can no longer teach you anything, I can no longer correct you in the way you answer, you answer better than the way I answered 20 years ago when I took the Bar in 1997, and I’m sure you will go beyond my place in the Bar exams,’” said Sarmiento, who was even more awed with Simondo when he checked his written answers on his notebook.

This level of confidence in him overwhelmed Simondo – but in a positive way.

In Thursday’s press conference, Simondo said he felt pressured, but a good kind of pressure.

However, despite what would look like excellence in his undergraduate studies, Simondo eventually learned that the medical field may not be his to tread. It took some painstaking first-hand experience in the hospital, failing to land a place in the Top 10 during the Philippine Nursing Licensure Examination, innumerable prayers and pleadings for signs that rerouted his path “as far away from the hospital as possible,” Simondo shared.

Even as he finally took his first steps on the forkroad between law and medicine, he still had room for reservations. So, once again, he prayed and asked for a sign: if he gets 2.0 or better in a class he had the most difficulty with, then law is what God wanted for him. And he received exactly 2.0.

Incidentally, that class was Constitutional Law 1, the same class where Sarmiento foresaw Simondo topping the Bar. More than just a class to be passed, it was the “make or break” moment for Simondo’s career path.

And, as it turned out, that was the moment the 2017 Bar Exams topnotcher was made.

“It made me feel very happy [to have met those] expectations. I did my part and I did not come up short. It made me feel satisfied and fulfilled,” Simondo said upon hearing the sentiments of his former professor.

Garnering a score 91.05% came as a shock to Simondo, who told the media that he estimated his results to be around 84 at the highest and 74 at the lowest.

However, his friends and classmates disagree. For them, it was a given for Mark to top the Bar.

“It would have been a surprise if he did not top the bar! Mark topped every test in law school and we were together during Bar review. I saw how he prepared and studied for this. Everyone who knew Mark knew how capable he was in conquering the Bar,” said Katrina Tan, a friend of Simondo and fellow Bar passer.

“I am sure that those who know Mark, myself included, all believed that he would ace the Bar Exams,” said Leanne Torrato, who was Mark’s teammate in several Moot Court competitions.  “I’ve never seen him have a bad recitation or a bad exam score.”

He is described as a serious, dedicated, and diligent student, but also humble and approachable. He is said to be the go-to guy for when his classmates have questions or need opinion on a legal matter.

“Say you are confused about a certain legal question, we say, ‘Ask Mark,'” Torrato said.

However, perhaps just like the regular board taker, even someone with Simondo’s capacity had his share of doubts.

His girlfriend Anya Yusay, who is also currently taking up law in the same university, shared that she and Mark talked every night when he was reviewing for the Board. He would share how exhausting the experience was and Yusay would just listen and try her best to encourage him.

Simondo shared in an interview with the media that he studies an average of 8-9 hours daily, and pushes it to 12 hours during vacations, which Yusay said was just normal in law school.

Yusay, who is set to take the 2020 Bar Exams, shares that this inspires her to also do good in her endeavor.

Simondo expressed interest in corporate law, but said that he is not closing the doors to the possibility of public office. However, he “definitely” will not run for office. (READ: 2017 Bar topnotcher wants to be a lawyer for the poor) – Rappler.com