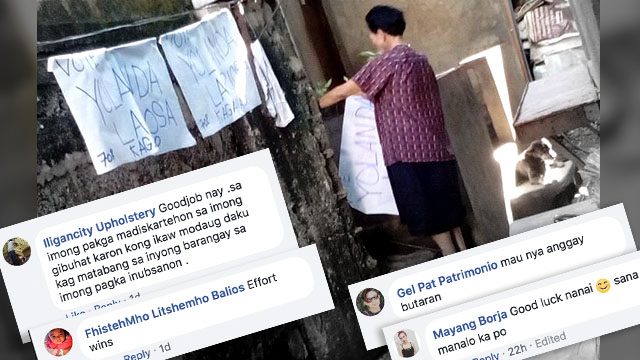 Facebook Twitter Copy URL
Copied
In the 2018 barangay and Sangguniang Kabataan elections, two candidates use their creativity to overcome their lack of campaign funds

MANILA, Philippines – The 2018 barangay and Sangguniang Kabataan elections are only a few days away and candidates are pulling all stops to get votes.

Candidates have been using catchy campaign jingles and flashy posters to get noticed, but at least two candidates have stood out – at least, in the eyes of netizens – for a very different reason.

Yolanda Lariosa and Marito Almonte decided not to allow their lack of funds to block their dream of getting elected on May 14. They rolled their sleeves and used their creativity in making campaign posters using whatever material they can find.

Lola Yolanda, as she has come to be called, is a barangay kagawad candidate in Patag, Cagayan de Oro. Despite having no money to have usual campaign materials made for her, Lariosa gathered used tarpaulins and wrote her name on their unused side.

Lariosa first drew the attention of Facebook user Maileen, who posted her efforts on her social media account.

(My neighbor Lola Yolanda Lariosa is so pitiful. She’s running for Barangay Councilor but she doesn’t have the funds to buy tarpaulins, so she instead wrote her name on the backs of used tarpaulins….There are people who pass by our place and just laugh at what the old lady is putting up. Please don’t laugh at her because what she’s doing isn’t funny. I hope someone can help her after seeing my post.)

The post has gone viral on Facebook, racking up to more than 20,000 shares as of posting. Many commenters announced their support for her, and their belief in her integrity as a barangay official.

Some people have even gone the extra mile to support Lola Yolanda in more direct ways, with one user producing a tarpaulin with the intention of donating it to her. 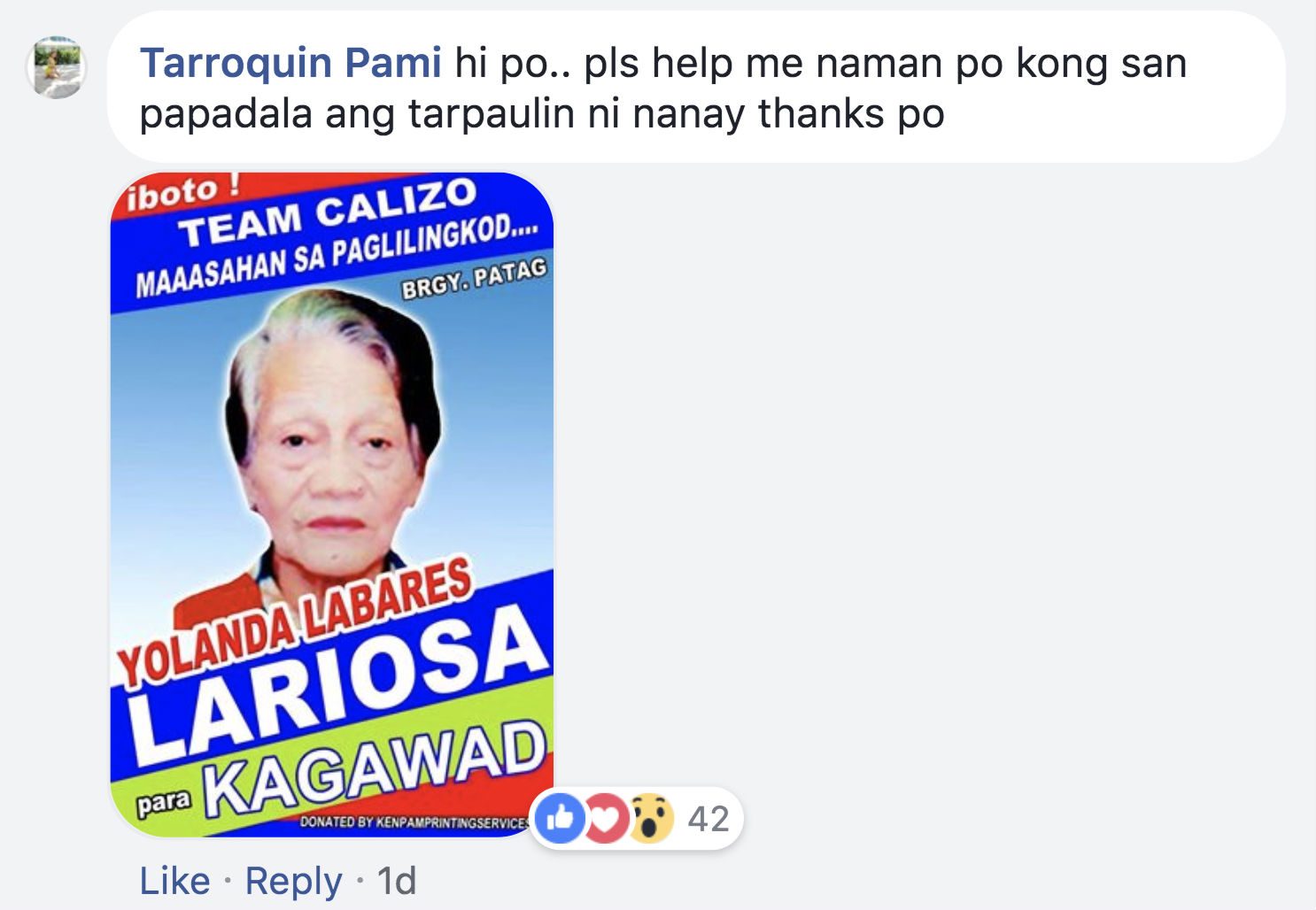 In the wake of Lariosa’s sudden internet fame, the niece of another candidate for barangay kagawad mentioned that their uncle had the same predicament: lacking funds to run a political campaign and having to make do with homemade posters to let their neighbors know about him. (We also used sacks for our posters since we also lack funds for campaigning. This is what we came up with to inform our barangay that my uncle is running for councilor.)

“Mato” is the nickname of 43-year-old Marito Almonte, who is running for kagawad in the  Barangay Landas in Pangasinan. According to his niece, Ayuzawa, this was not the first time that Almonte did this. He ran for barangay chairman in the past, using the same simple homemade promotional materials.

She said her uncle had opted to do this because the money Almonte’s family earns from their small sari-sari store is only enough for their daily needs.

A majority of the commenters who replied to her talked about their support for people like Almonte. However, Ayuzawa’s call for attention has not received as much traction, with some commenters being skeptical of her post as well.

Yet these posts have only gone to show how far Filipinos would go to help out those in need. Sometime after the post about Lariosa went viral, a printing company sponsored and sent campaign materials to help her in this election.

Lola Yolanda’s campaign has gone a long way, after she got widespread support because of her earnest campaign effort.  Online, many people wished her success in the upcoming elections and offered support through Facebook.

Have you seen any other unusual stories of campaigns and candidates this election season? Tell everyone about it on X! – with reports from Gab Landrito/Rappler.com

Gab Landrito is an intern at Rappler for the MovePH and Social Media section. Studied Communication Arts in UP Baguio with a minor in Journalism.