Donations pour in for student who wrote ‘heartbreaking’ excuse letter 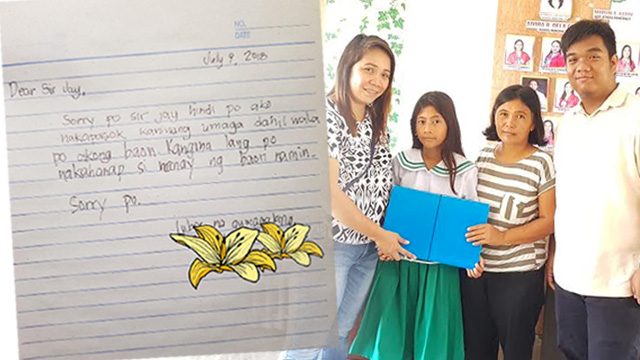 MANILA, Philippines –  Concerned netizens have made sure that the student who wrote a “heartbreaking” excuse letter that went viral will no longer worry about allowance.

Christian Jay Padilla Ordoña, Grade 8 adviser and Filipino teacher at Bongabon National High School in Bongabon, Nueva Ecija shared the now viral letter of one of his students. The student, Marinel V. de Guzman, 14, explained in her excuse letter why she missed school that day.(READ: The real cost of education in the Philippines)

Ordoña explained that Marinel was absent from class the morning before he received the letter.

(The student suddenly called me. She was next to the door. I told her, ‘Child, why were you absent awhile ago? You did not have attendance, you’ve been gone the past few days.’)

Marinel handed him the letter, written on a sheet of paper, and then shyly ran into the classroom. (READ: Scavenger to degree holder: The story of Jeb Bayawon)

(I freezed, my heart broke, and I had no idea what to do when I first read the letter.)

Marinel is the 4th in the family of 5 children. Her mother is a ‘magsasaki’ or sorter of goods and vegetables, most of the time, onion. Her father, on the other hand, is a farmer and coal maker.

Other netizens wanted to reach out and look for ways to help Marinel.

The foundation have already pledged to fund Marinel until she finishes college. She will also be receiving a weekly allowance of  P500 to accommodate for her needs.

In a report by the Philippine Statistics Authority, 1 in every 10 Filipinos aged 6 to 24 years old is an out of school youth (OSCY), 20.2% of them attribute their inability to study due to financial concerns and high cost of education.(READ: InspireCourage: The education of Daniel Cabrera)

Nationwide, about 53% of OSCYs belong to families whose income fall at the bottom 30% based on their per capita income.

Ordoña says that Marinel’s case isn’t the first he’s encountered at the school. He estimates that in every class, there are around 5 to 10 students who could not attend school because of financial reasons.

(In this school alone, there are already so many. I have encountered so many students who can’t study because they don’t have the means. They would help their parents instead to harvest, or sell in the market early morning.) (READ: What is your education worth?)

Ordoña shared that the school engages in home visitations, and keeps tabs on students who come from troubled backgrounds, struggle with financial difficulties, and the like.

The school has also adopted the Open High School Program, which aims to “retain in school potential dropouts and encourage out-of-school youth of high school age to return to school.”

Luisa Jocson is an intern at Rappler. She is currently majoring in AB Communication at the Ateneo de Manila University.