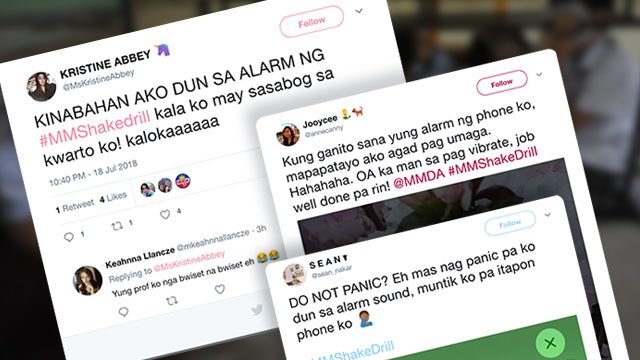 MANILA, Philippines (UPDATED) – At around 1 pm on Thursday, July 19, many people  momentarily panicked when their phones simultaneously blasted with an alarm that reminded them of the warning siren in the hit 2013 US film, The Purge.

The alarm, which was accompanied by a message, marked the start of this year’s #MMShakeDrill organized by the Metropolitan Manila Development Authority (MMDA).

The MMDA earlier said the date of the annual metro-wide earthquake drill would not be announced in advance even to government responders and the media.

MMDA public information officer Jan Paul Songsong said that a prompt would instead be sent on the morning of the drill via the National Telecommunications Commission (NTC) short messaging service (SMS) that would initially inform the public about the schedule of the drill.

On Thursday morning, the warning message was sent out.

Netizens shared how they initially panicked when the alarm rang.

Many recalled the warning siren in The Purge. In the horror film, the siren signaled the start of 12-hour period when all crimes are considered legal, except the killing of politicians.

The #MMShakeDrill sounded like the start of The Purge.

Here are some other netizens’ reactions and experiences when their phones sounded the #MMShakeDrill alarm.

Republic Act 10639 or The Free Mobile Disaster Alerts Act signed in 2014 mandates all telecommunications service providers to send free mobile alerts in times of natural and man-made disasters and calamities.

The annual #MMShakeDrill drill is geared towards assessing and strengthening the capacity of individuals, households, and local government units in responding to the “Big One.”

Based on the Metro Manila Earthquake Impact Reduction Study (MMEIRS), a study that analyzed the different possible earthquake scenarios, the strong earthquake that could hit the mega city will leave 33,500 people dead and an about 113,600 more injured. – Rappler.com