LOOK: UPCAT applicants camp out, faint lining up in Diliman 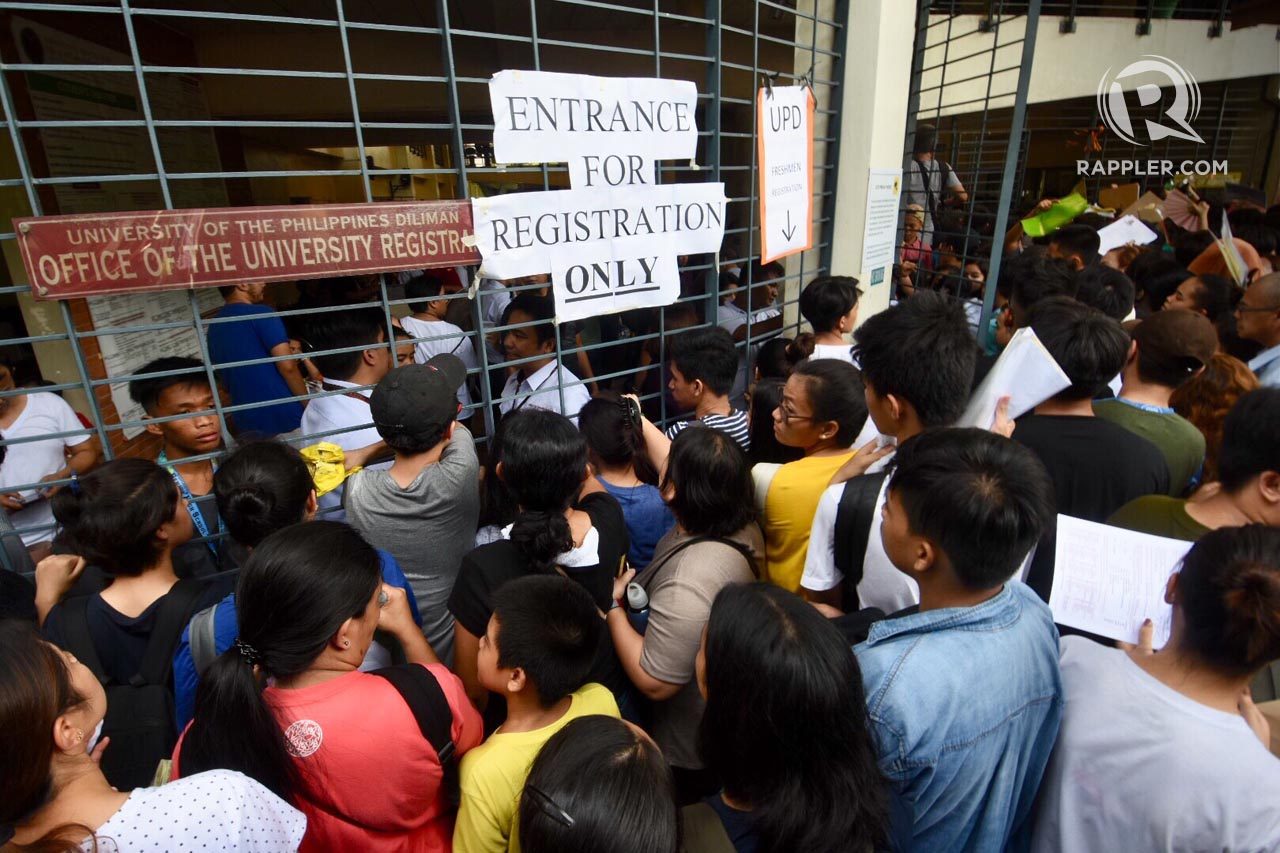 Facebook Twitter Copy URL
Copied
On the last day of filing applications for students from Metro Manila private schools, hopefuls get an idea why UP is sometimes called the 'University of Pila'

MANILA, Philippines – The struggle of high school students aspiring to enter the University of the Philippines begins when they line up to submit their applications to the premier state university.

On Monday, July 30, this struggle was far gone, as lines of applicants beating the application deadline for the University of the Philippines College Admissions Test (Upcat) snaked around the Office of the University Registrar (OUR) building in Diliman, Quezon City.

Students had camped outside as early as the Sunday night, July 29, hoping to be first in line and avoid the long wait. According to a tweet by Marc Espino, people had been in line since 10:30 pm.

This is the first time in recent history that application fees were waived.

Liane Jane Mercado, one of the applicants hoping to be admitted to the College of Mass Communication, said it was her 3rd day coming back to the OUR.

“I’ve been here since Thursday, but I didn’t have the chance since I was cut off. On Friday, I wasn’t able to get the priority stub. It’s the first time I was able to step into this building,” she said.

But no circumstances would stop the hopefuls.

ANG LALA. tried to enroll and came across so many distressed parents and students, may mga umiiyak na at hinimatay. some of them have been here as early as 2am para pumila.

this batch of freshies will be ready to face ANYTHING after this grueling app process. https://t.co/7fUyPFzNkV

Some enterprising applicants set up tents along the streets. Others huddled together under their umbrellas to shield themselves from the heat or rain showers. The humidity and the lack of chairs made it harder for the office to accommodate the thousands of applicants comfortably.

(I’m disappointed. Why? We were here in line since 9 pm [Sunday], and until now we’re still here. Those who came here this [Monday] morning have already left. Their submissions have been received. There’s no fixed system…. There were people who cut in line. The proper line wasn’t moving. But it’s okay. We got to finish in the end because there were a lot who fainted.)

Below are some photos from the queue at the state university: 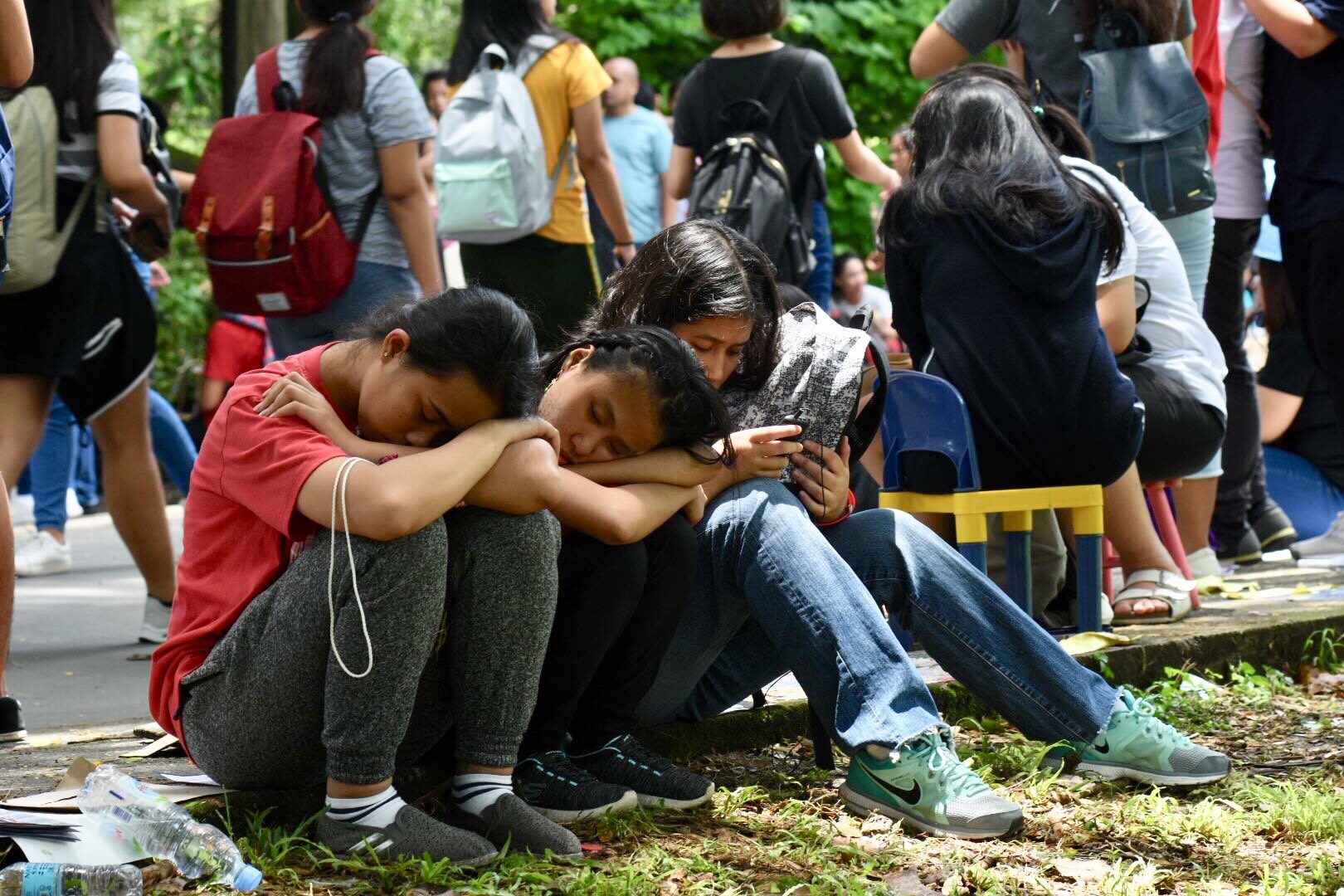 Due to the long wait, applicants became restless. Applicants and their companions were reported to be shouting, climbing up the poles, and standing on top of the chairs.  Officials had to push students back at the entrance of the OUR to avoid a barrage and possible stampede.

“I got to talk to a few of the applicants here. Some came 12 am, 5 am. They get to eat, but the problem is the amount of people. It has gotten so bad to the point that people are pushing each other. It’s a very overwhelming situation,” said Jana Calceta, who is stationed at the clearance section of the Office of Admissions-OUR.

Owing to the heat and intense waiting times, a handful of applicants also fainted or required medical attention. The OUR admissions section had to stop registration services at one point to accommodate students who fainted due to the weather condition. Some were assisted by the staff and the University of the Philippines Health Service, while others were brought to the infirmary.

Due to the dense crowds, a few students have already fainted or experienced panic attacks while waiting to submit their UPCAT applications. They were assisted by the staffs of the OUR UPD and UPHS. @rapplerdotcom pic.twitter.com/Y9wWQwly1K

Netizens also reported losing a few of their belongings, including their UPCAT application forms. Along with the lines of people, trash also gathered on the streets leading up to the OUR building.

Amidst all the noise, one sentiment rang out: Applicants are applealing for an extension.

UPCAT applicants are now chanting for an extension. Deadline for applications for Metro Manila public schools are on Aug 3, while regional public and private schools on Aug 10. @rapplerdotcom pic.twitter.com/jzn1rGQ4rO

In a facebook post, the university said that they will not extend the deadline of application. Instead, they will accommodate everyone who remains in line today and open a dropbox for the rest.

“All applications submitted today—physically or by courier (timestamped today)—will be accepted as within the deadline.” – Rappler.com

Annabella Garcia is an intern at Rappler for the MovePH and Social Media section. She is taking up BA Film at the University of the Philippines Diliman.