Aug 11, 2018 6:56 PM PHT
Mavic Conde
Facebook Twitter Copy URL
Copied
As coconut pollinators, kiwot bees have helped the farm increase its yield by as much as 50% 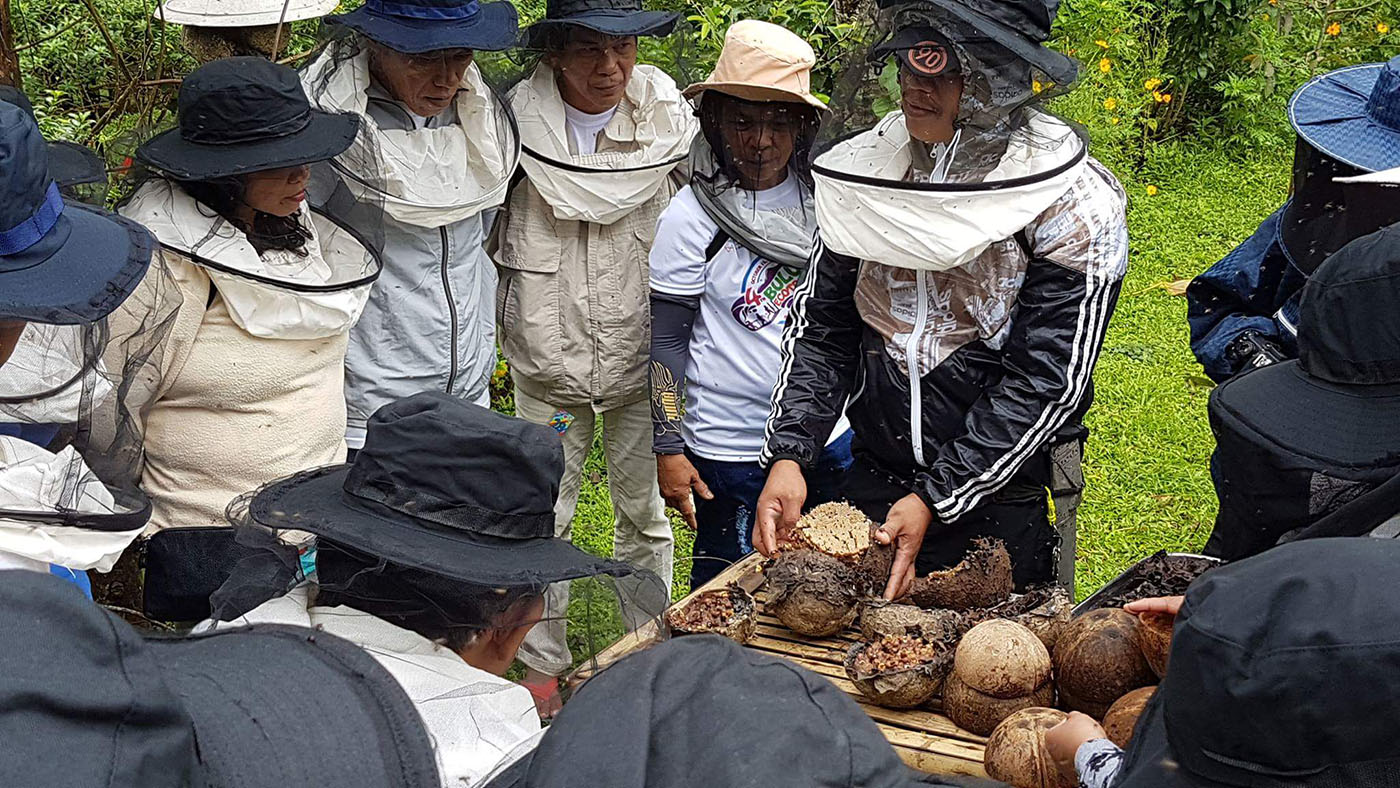 SORSOGON, Philippines – Thirty-eight-year-old Leony Gabiazo could have been a simple housewife but thanks to the thriving beekeeping in this province in the Bicol region, she and her husband have a job.

In 2000, Gabiazo was a stay-at-home mother taking care of her 3 children while her husband Dennis Dominguez was working at a newly opened bee farm in the province, now known as Balay Buhay sa Uma Bee Farm (BBu). Eventually, farm owner Luz Gamba-Catindig expanded to coconut plantations because “kiwot” bees (Tetragonula biroi) are excellent pollinators. (READ: 11 fascinating facts about bees, the most important pollinators)

Gabiazo would later join her husband as part of the production staff for bee products like honey, pollen, and propolis.

The Villa Corazon farm in Bulusan town is 7-hectare coconut plantation and an annex of BBu farm. It has been pollinating coconut trees with stingless “kiwot” bees, which are native to the Philippines and are known pollinators of high-value crops like mangoes, pili, and coconut.

As coconut pollinators, kiwot bees have helped the farm increase its yield by 35% to 50%.

“The reason for the higher yield is that fewer young coconuts fall to the ground,” Catindig said. 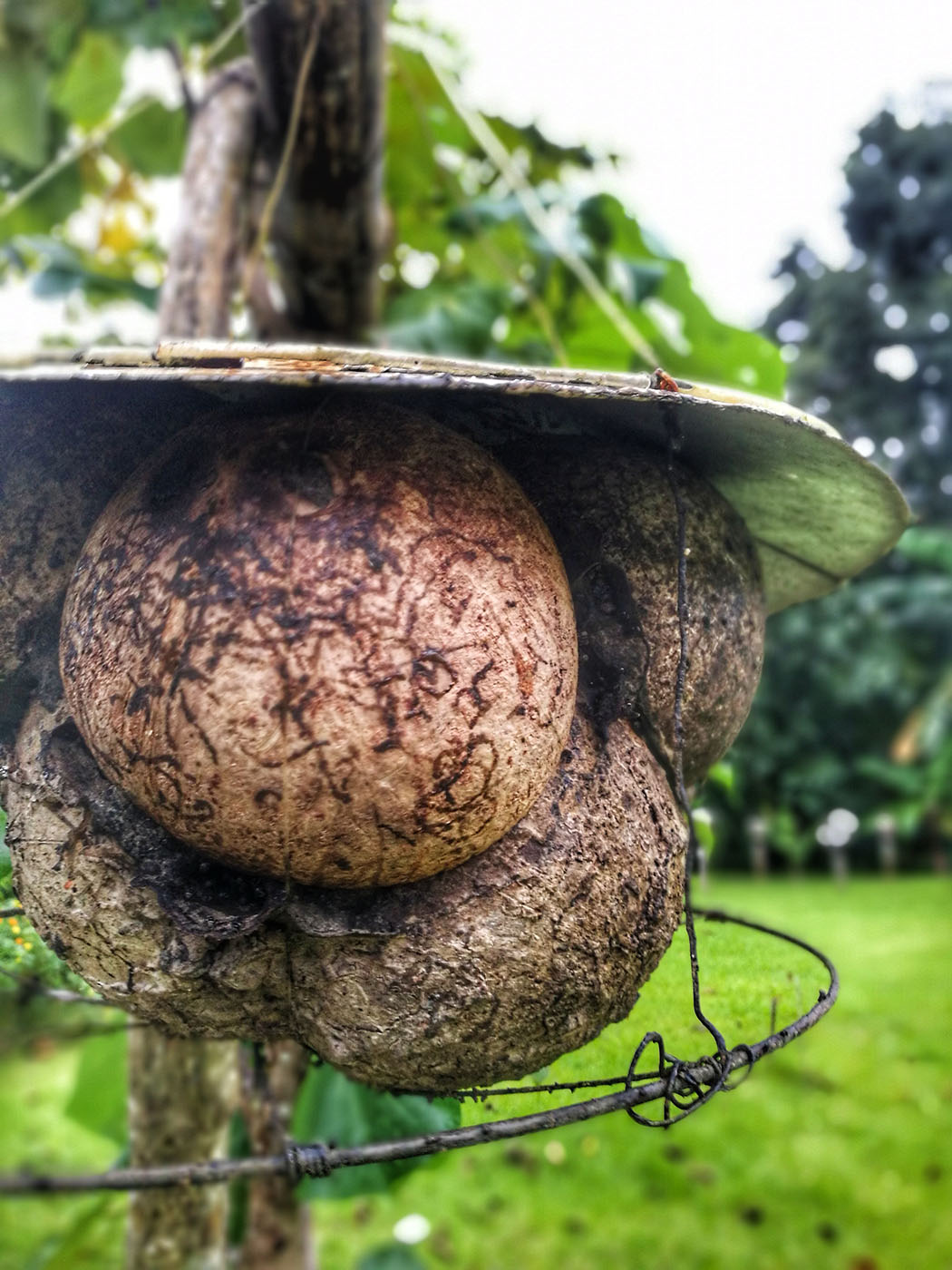 Catindig started to feel the improvement in yield 6 months after using kiwot bees for pollination, and since then harvests have been good even after typhoons.(READ: Can bees help end hidden hunger?)

That called for 4 regular farm workers, and Dominguez responded.

He left bee hunting in the wild and became a full-time farm worker. “My husband is earning P300 per day and gets a P10,000 bonus every time harvest is good, either from Villa Corazon or BBu,” Gabiazo said.

Catindig and her farmers trained under the University of the Philippines Los Banos (UPLB) Bee Program headed by Dr Cleofas Cervancia, which involved an intensive beekeeping course. With constant monitoring from her mentors, Bbu became a project site – a learning ground for existing and interested beekeepers and crop growers.

As a techno-demo farm, BBu is able to give beekeeping training to more bee hunters and community members through sponsored programs. They would learn that there’s no need to burn the forest for honey and there are livelihood opportunities from beekeeping.

Catindig got her first kiwot colonies from slash-and-burn farmers who also hunted for bees in the wild. She initially bought 5 colonies in 2004, and 1,000 more later, rescuing the bees in the process.(READ: Flies, wasps, beetles are important pollinators too – study)

In the past, the farmers were after kiwot honey that costs P3,000 per gallon, recalled Gabiazo. Then the farm began showing results.

“We harvest once in every year (instead of several times because it rains most of the time in the area),” said Catindig.

She added that while the Tetragonula species do not produce as much honey as other species because of their size, unlike other species, they produce pollen and propolis.

People would also visit the bee farm and pitch the hammock they brought with them. Later, there would be requests for a place to stay so the farm now rents out huts and villas.

Gabiazo said with a smile the most important change in their lives is in their income. “Now we have a carabao, a motorcycle, a tricycle and a piggery because of the bonus we get from the farms,” she said.

Aside from the Dominguez couple and Gabiazo’s brother-in-law, the coconut farm has 4 part-time workers.

One of the 16 regular workers at the farm said the job has helped provide their family enough money.  “I don’t have to go to Manila to provide my family’s basic needs.” (READ: 1.4B jobs depend on pollinators – report)

There are 18 more on-call whose task is maintaining the farm gardens and tending more plants that bees like. This beekeeping essential enhances biodiversity, as it not only encourages the planting of nectar plants but also increases plants through pollination. 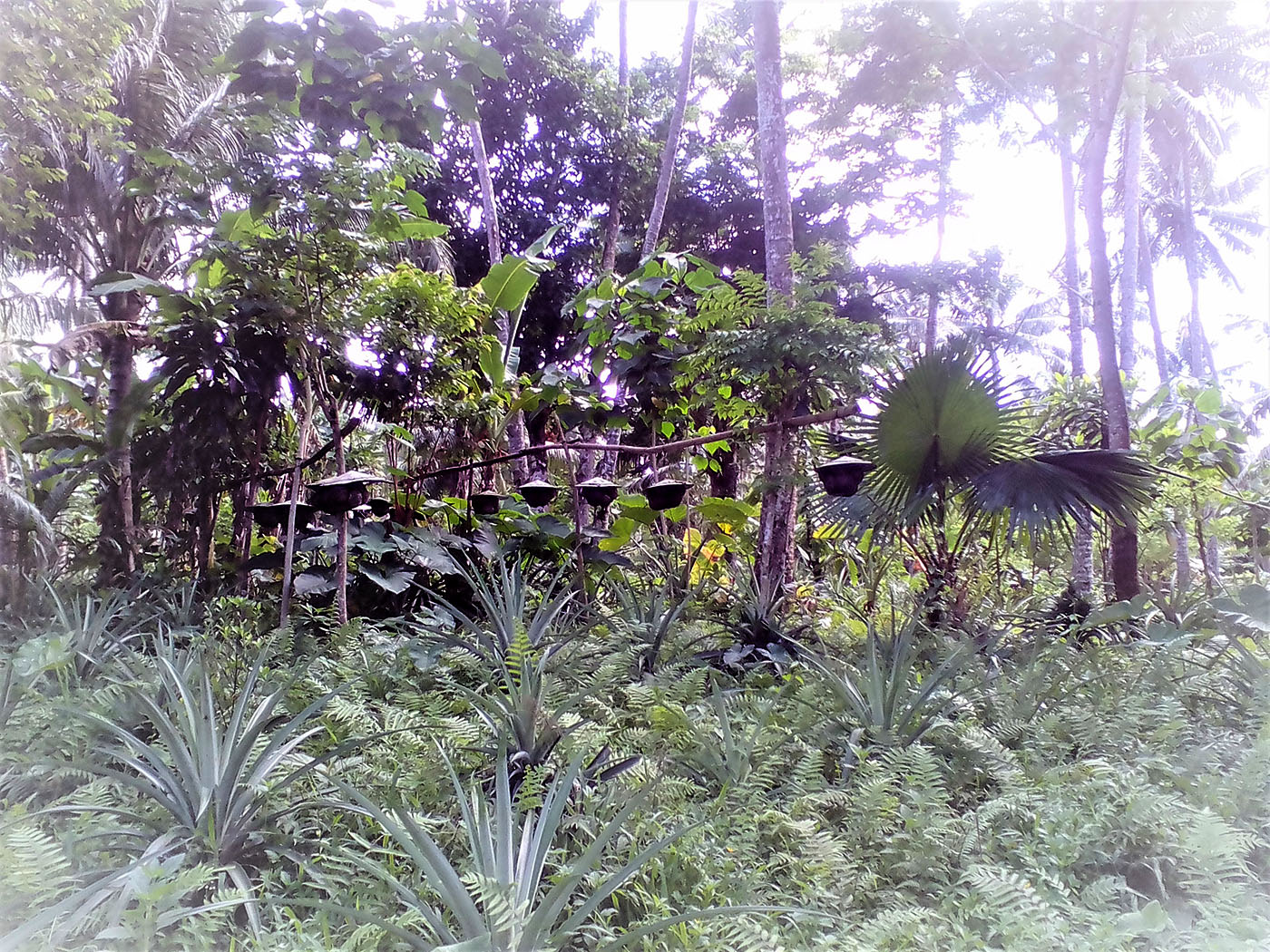 A caretaker of the coconut farm said pineapple and banana intercrops are also spared from pesticides, to protect the bees.

Workers and visitors get to eat fresh, organic food at the bee farm. “My kids get to eat pure honey too,” Gabiazo added.

Cervancia, for her part, said of the farm: “It’s kind of a showcase. If people can see that the farm is earning, they will believe and they will be encouraged.” (READ: Sugar gives bees a happy buzz – study)

The municipality of Bulusan adopted the beekeeping project as its banner agriculture program in 2017 with the aid of the Agriculture Training Institute (ATI). Its 40 beneficiaries – mostly bee hunters and recipients of lands in upland areas – reside in the outskirts of Mt Bulusan.

The project’s main objective is to improve the farmers’ productivity, which is also one of the main goals set by the Philippine Coconut Authority (PCA) in its 2018-2022 road map for the industry.

Each beneficiary received 11 colonies of kiwot bees, which were bought from 6 bee hunters for P500 per colony. Some of the beneficiaries bought a few more colonies, giving the hunters who are beneficiaries themselves, additional income.

One of them is Jose Furaque of Kapangihan in Bulusan who said he bought more colonies as he has enough space in his backyard.

Bulusan Mayor Michael Gusayko said there have been fewer requests for financial aid from the groups since they started the project. (READ: How residents make a living out of their home, Lake Bulusan)

A big and healthy pollination hive can yield 3 bottles of honey, said Cecilia Olan who monitors all the beneficiaries and also a beneficiary herself. A bottle with 750 mililiters costs P900.

With the beneficiaries living nearby coconut plants, these get pollinated too like the neighboring farms.

Proper profiling helps in the positive community response to this project. As in the words of Gabiazo, as former hunters, “their interest with the bees is already there.”

According to a UN-HABITAT report on Sorsogon’s vulnerability to climate change, the province is at risk of extreme tropical cyclones which locals associate with climate change.

The province has been experiencing more than the average 3 cyclones in two years and more rain volume and stronger winds from typhoons. Climate change also causes increasing incidence of evacuation of families from urban coastal areas, especially those living in informal settlements, and riverbank erosion.

Cervancia said kiwot bees can help in mitigating climate change because they visit more economic plants based on pollen analysis. They make fast ecosystem recovery possible too through intense pollination.

When Typhoon Nina hit the region in 2016, villagers from Bulusan were among the more than 10,000 evacuees who fled flooding. Both the Balay Buhay sa Uma Bee Farm and Villa Corazon Farm recovered fast though, despite losing many of their colonies. 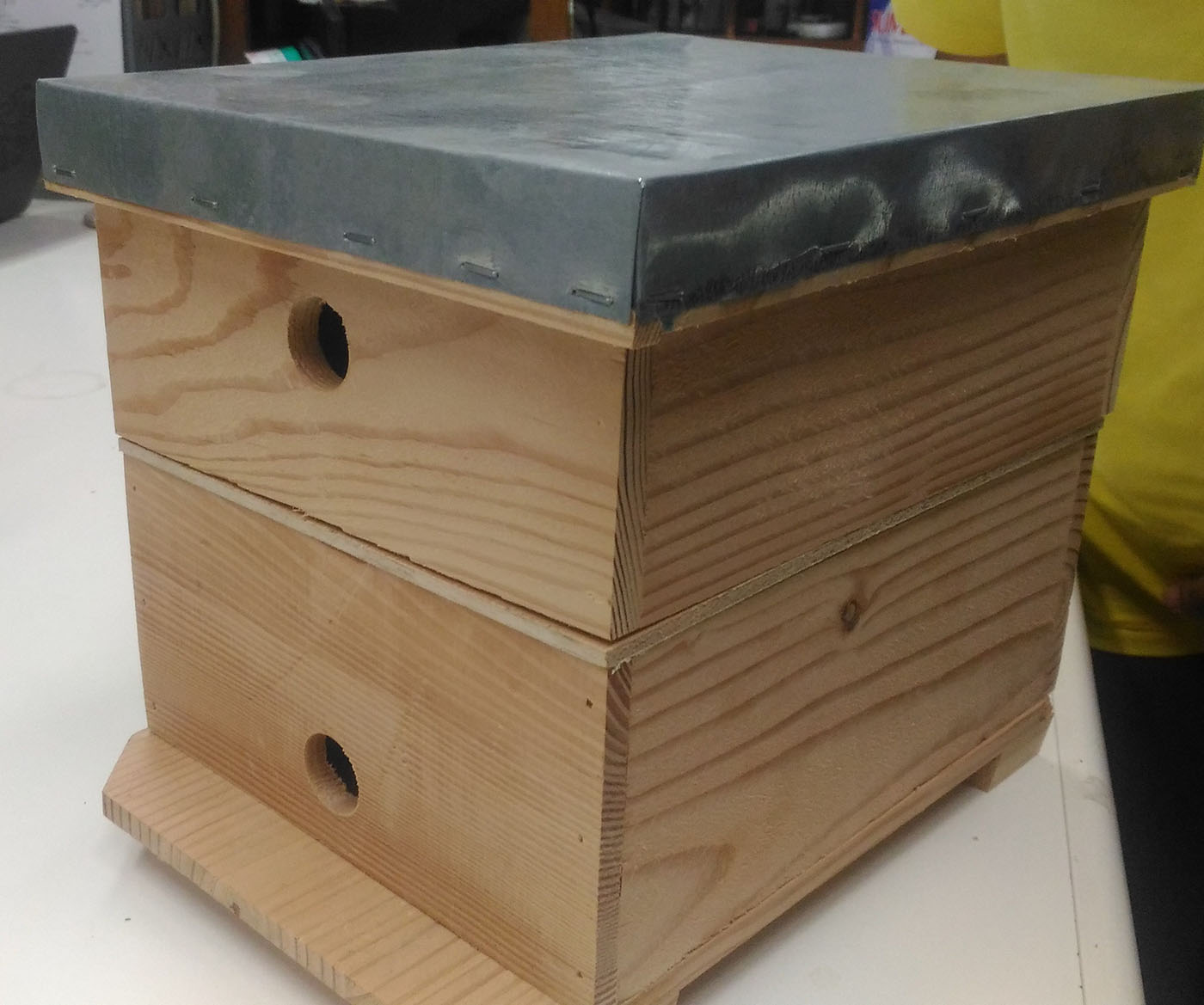 More women in the community are also following the steps of Gabiazo. Cervancia said a majority of the training participants in the second part of the program are women because the training involves a meticulous process, from picking the pollen and extracting the honey to separating the propolis. (READ: Climate change: Why PH should care)

Such livelihood opportunities prevent family breadwinners from engaging in environmentally destructive activities such as slash-and-burn farming and deforestation.

Through agro-tourism, the bee farm gives jobs to these farmers, their housewives, and other community breadwinners, like what the Aggrupation of Advocates for Environmental Protection (AGAP-Bulusan) did in Bulusan Volcano Natural Park.

The park’s rich vegetation makes Bulusan an ideal place for beekeeping, while at the same time protecting it and the communities in lowland and coastal areas through beekeeping.

Indeed for Cervancia, the most important takeaway from beekeeping is the conservation awareness a person develops. It makes people protectors of the environment especially if they know their livelihood depends on it. (READ: Will you survive a world severely battered by climate change?)

As livelihood source, it motivates them to do more from teaching their families the do’s and don’ts to harvesting honey and product development.

“I first learned how to harvest honey through my husband,” Gabiazo shared.

Furaque’s sons, who are approximately in their twenties, could also tell which pollination hives have honey.

Catindig brought with her the Dominguez couple in trainings and seminars she had attended in the country, equipping them with skills of an able technician.

Beekeeping, therefore, becomes a family affair, and in Catindig’s case, a community livelihood.

Beekeeping is an emerging industry in the Philippines. With the right intervention and strategies, it is “seen to address food security and provide income-generating opportunities to Filipinos,” Rita dela Cruz for bar.gov.ph. 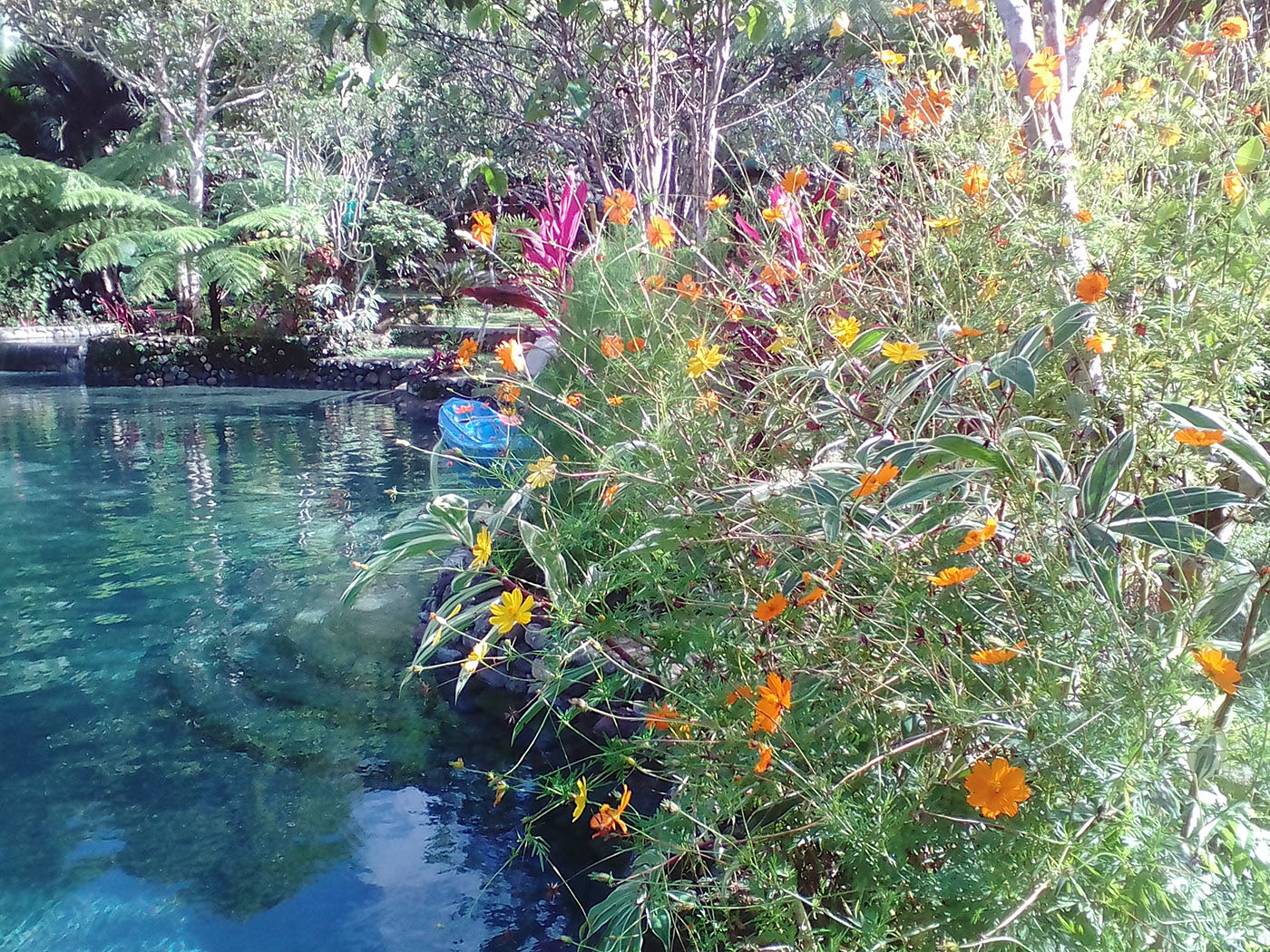 The pollination hive developed by UPLB is easy to mass produce; supports large-scale pollination services, and allows production of quality products in an easy processing and hygienic way.

If adopted by the entire province of Sorsogon, almost 50,000 coconut-dependent farmers in the province will benefit from this. In 2015, only 7.6 million of the province’s 9.5 million coconut trees were fruit-bearing. It can also be replicated across the country, where 68 of 81 provinces are planted with coconut.

Kiwot bees can help senile coconut trees bear fruits. In ideal conditions, kiwot bees can increase yield by 80%, and coconut provides adequate pollen for the bees as it continues to bloom all-year round.

Even with the recent improvement in coconut production, the Philippine coconut industry has yet to tap its potential in exports. For agriculture columnist Dr William Dar, “addressing low yields at the farm level can be an excellent move to helping realize that.”

Are these not what Catindig’s farms in the Bicol region have been efficiently doing, first through coconut pollination and then through beekeeping? – Rappler.com

Mavic Conde is a Bicol-based news, travel, and environmental writer. She regularly writes for Rappler, Greenfields Magazine, and SeventyOne Magazine. She’s a UNESCO fellow for climate change and sustainable development reporting in Southeast Asia and a grantee in the 2018 Asia-Pacific Story Writing Grants by Internews Europe.