Mar 5, 2012 11:04 AM PHT
Yuanne Guevarra
Facebook Twitter Copy URL
Copied
Many Filipinos love anything Korean because they see mirrors of themselves 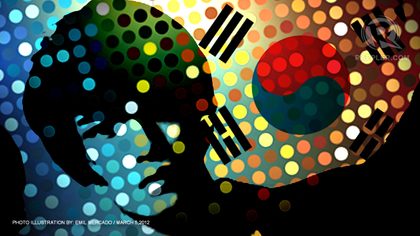 From their stylish haircuts, to sometimes extraordinary taste in fashion, catchy music, and endless drama, Koreans have earned their rightful place in the hearts of Filipinos.

And why not? For a nation that loves beautiful endings, fairytale-like stories, Korean stories were easy to digest and identify with.

For a country dubbed as one of the happiest in the world, the always groovy Korean music got teenagers and Pinoy young adults alike to dance to their music.

Maybe, even if in any event, PNoy gets tired of Grace Lee, the Korean music and arts industry have nothing to lose and no reason to fear. The fanbase has been established–and likely to go on.

Who would forget the beautiful story of “Lovers in Paris,” whose most memorable line “Aja,” captured the hearts of many Pinoys? It was such a beautiful love story that local television even made its own version.

Of course there were also the stories of “Winter Sonata” and “Endless Love” that made televiewers cry and feel the pain of losing a loved one.

Who could forget the bubbly yet inspiring story of Kim Sam Soon, a broken-hearted woman who eventually finds the love of her life in an unusual circumstance? Who would forget the 3 Bears song that Song Hye-Gyo sang to please the parents of Rain’s character in the “Full House” series?

Why do Pinoys love Korean drama? Despite the language barrier, it’s because the stories of Koreans are the same as any Filipino story.

We see ourselves in their simple story plots. We are suckers for love and romance, hence we are easily attracted to their love stories.

The fast development of the plots is also a breather from the usually long and heavy stories that locally-produced dramas offer. Not to mention the unforgettable mushy dialogues that never fail to make everyone believe in love and happily-ever-afters again.

The rise of the KPop genre

They always say that music knows no boundaries and that it binds everyone regardless of race and age. This must be true in the case of the KPop genre because even though most of the songs are in Korean, fans all over the world are still going gaga about it.

The catchy and appealing beats of the songs will surely make you move and groove to the music. The tune and dance moves are also one of the reasons why KPop songs have easy recall. In the Philippines, songs like Fire and I Don’t Care by 2NE1, Nobody by The Wonder Girls, and Sorry Sorry by the top Korean boy band, Super Junior, all made Filipinos dance even if they could not fully understand the lyrics.

Aside from the music, the singers themselves won the heart of many Filipino fans. Korean male idols may even sometimes put real women to shame because of their soft features and Snow White-like skin. They are even prettier compared to real girls when they dress like them.

Fans also have fan chants and enjoy making fan fictions (fanfic) about their favorite celebrities. These entail creating stories that are usually about the couples they like (and yes, even if the couple is of the same sex). These made the KPop fandom special, exciting, and distinct from other fan clubs.

Korean celebrities are also known to be good variety show guests and emcees. Hosting variety and reality shows make them more appealing and delightful to the fans because they display their charm and funny side which fans do not usually see during their concerts and music show performances.

KPop idols have large fan bases in numerous countries around the globe and more non-Korean speaking fans even try to cover and translate the songs in English.

These prove that the Hallyu wave can crash the international music scene if given the chance to do so. Some of the groups known internationally include Super Junior, 2NE1, Big Bang, Girls’ Generation, TVXQ, JYJ, and The Wonder Girls.

What awaits the Hallyu wave?

Several Korean movies have won and been nominated for international awards so there is no doubt that some of the actors get the chance to work with top filmmakers and artists in the world.

Because of this, the Korean movie industry continues to work harder in bringing better and top-caliber movies with hopes that they could reach out to more international audiences.

As for KPop, it may take a while before the genre may be compared to the more widely-accepted music from other international artists. But the important thing for these Korean idols and their fans is that they are slowly gaining recognition and admiration from famous US songwriters.

Korean music companies are also starting to hold concerts outside Asia to reach out to their fans in other continents, trying to increase their popularity and fan base by doing so.

But no matter how long it takes them to get wider recognition, these idols can be sure that while they are doing their best in achieving every artist’s dream of becoming known globally, their fandoms will be waiting and will unceasingly cheer for them.

So as for now, Oppa aja aja fighting! – Rappler.com