WATCH: How Cebu’s skateboarders are fighting for their own space CEBU CITY, Philippines – In the Philippines, skateboarding has not received as much attention as other sports.

Angelo Talago, 33, would know, being one of the seniors of the Cebu Skateboarding Association (CSA). Talago started skateboarding when he was just a teenager. He said he loved the feeling of freedom and independence he got while skateboarding.

In Cebu City, the local skateboarding community has racked up around 3,000 members. Despite the growing number number, Lago said they continue to struggle in getting both government support and public acceptance.

On any random night, Talago and his friends would get around the city on their skateboards. Usually with him would be 23-year-old college student Anthony Dorot, 23, who started skateboarding when he was still in high school.

The feeling of freedom brought by skateboarding would be fleeting, as authorities would often chase after them to drive them away.

(Our main problem is that we don’t have a place or spot. Anywhere we go, we get kicked out usually by guards or police.)

Talago laments the absence of a public skate park where they can practice for free, forcing them to use the streets.

(It’s really hard to skate because you need a private skate park, money for transportation, snacks, and entrance fee. That’s why usually, we just keep to the streets.)

More than that, there was also the lack of government support for skateboarders with the potential to compete internationally.

Fortunately, things appear to be slowly changing for the better, after Cebuana skateboarder Margielyn Didal bagged a gold medal in the 2018 Asian Games.

“When we heard the news that Margie bagged gold, it was unexplainable. The skateboarding community rejoiced. Finally the government is hearing us,” Talago said.

Dorot expressed his gratitude to Didal because she gave hope to their community.  (READ: Margielyn Didal: From street kid to Asian street skate champ)

(We are thankful for Margielyn’s victory because has improved the  skate scene here in Cebu. We’ll really get the skate part that we’ve been asking for. She also said that we won’t be in the streets anymore and cops will now stop reprimanding us.) 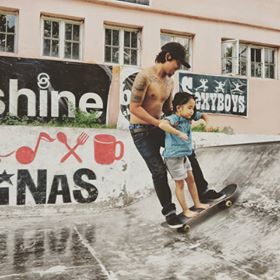 Talago said they had been in touch with the local government for more than a year now over the construction of public skate park but nothing has happened, so far. But his optimism was bolstered by the announcement of Cebu City Mayor Tommy Osmeña on Facebook that the city government would build a public skate park.

This is good news for Talago, whose daughter, Jazzy Hannah, also wants to learn skateboarding.

“I believe every type of sports should be treated equally. Especially now, they’re calling us athletes. I hope that they can give us the same support they’re giving basketball,” Lago said. – Rappler.com“