Floats with meaningful stories take spotlight at UP Lantern Parade 2018 MANILA, Philippines – The University of the Philippines’ (UP) Christmas theme “Paglaot, Pagdaong” (sailing out to sea, docking) was the symbolic thread that connected most of the glowing lanterns that weaved their way along the university’s academic oval on Friday, December 14, for this year’s UP Lantern Parade. (IN PHOTOS: Despite the rain, UP Lantern Parade 2018 shines on)

The Kamalayag sculpture by artist Toym Imao – the centerpiece of UP’s Yuletide celebrations this year – is a combination of the voyaging spirit as depicted in a kumpit or a traditional boat overtaking waves, and the celebration of the 70th anniversary of the Oblation’s presence at the UP Diliman campus.

Each lantern on display at the parade shared a story, while many lanterns became platforms to a larger message.

The float of the Institute of Islamic Studies (IIS), for instance, featured a boat made from recyclable materials to illustrate the resourcefulness and strong movement of the people. 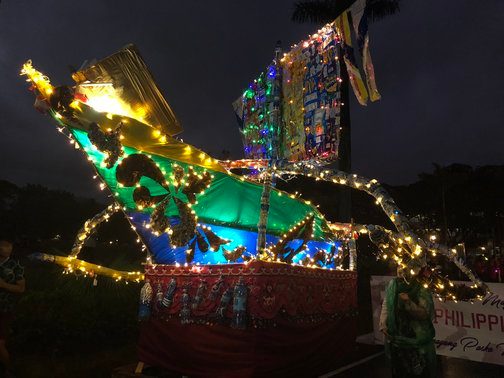 The committee behind the bangka (boat) was made up of families hailing from various tribes in Mindanao. They reused old water bottles, newspapers, and plastics to make their award-winning float.

Women in headscarves and men in traditional Islamic clothing danced to the rhythm of their float’s engine the minute the parade kicked off.

This year’s platform and theme resonated with the IIS because they could showcase their “unique Islamic traditions” enmeshed with local folklore. The float inspired students and educators from Mindanao to fly in to Manila to literally lift up the lantern in pride.

Meanwhile, the UP College of Arts and Letters came in third place for their bangkang papel (paper boat) float.

He added: “If you look a little bit closer at the boat, we expose the texts. Some of these texts were selected from the creative works from our faculty and graduates. You’ll see poetry and stories.” One of the lanterns at the parade featured the country’s “King of the Road,” the jeepney. Mounted on the public utility vehicle was the neon-lit plaque that read “Resist! In masa we trust” (Resist! In the masses we trust) – designed by Agham Youth and the College of Science.

Calls to action were written in both Tagalog and English tackling capitalism, imperialism, and mass displacement of indigenous communities, with the aim of highlighting the ongoing political repression under the Duterte administration.The RESIST lantern committee plans to continue the protest across colleges. Jong Medrina, one of the longtime workers of the Sumifru Corporation that oversees Mindanao’s banana plantations, participated in the parade to bring labor rights closer to students.

“We’re here to exhaust all means to strengthen our calls,” Medrina said. “In Mindanao, our freedom to assemble has been taken from us.”

Passersby stopped to witness the “silent protest” attended by over 10 workers, student activists, and dissidents wrapped in white and red-stained plasters. – Rappler.com

Jazmin Tremblay is a Rappler intern and a recent graduate of Bachelor of Communication Studies program majoring in journalism from Macewan University, Canada.