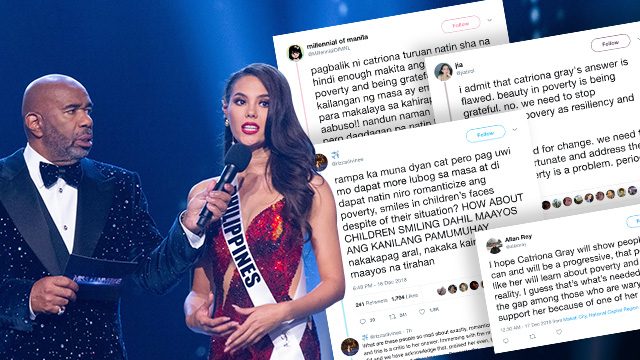 MANILA, Philippines  – While most Filipinos rejoiced as Catriona Gray brought home the 4th Miss Universe crown for the country, some netizens were not pleased on how she answered the final question.

Did Catriona “romanticize” poverty? Some netizens thought so.

On Monday, December 17 (Manila Time), Catriona was asked: “What is the most important lesson you’ve learned in your life, and how would you apply it to your time as Miss Universe?” (READ: Here are Miss Universe 2018 Catriona Gray’s winning answers)

Catriona answered by saying that she has worked a lot in the slums of Tondo, Manila and there she witnessed how life was difficult for some. While she sympathized with some Filipinos living in that condition, Catriona said that she would always look for the beauty in it.

“I’ve always taught myself to look for the beauty in it, to look for the beauty in the faces of the children, and to be grateful. I would bring this aspect as a Miss Universe to see situations with a silver lining, and to assess where I could give something, where I could provide something as a spokesperson. If I could teach also people to be grateful, we could have an amazing world where negativity could not grow and foster, and children would have a smile on their face. Thank you,” Catriona said.

While her answer was lauded by most her fans, some took to social media to express disappointment.

For Twitter user @omidong, Catriona’s answer is “problematic.” According to him, it’s better that people challenge her viewpoint for them to have a deeper conversation on poverty.

It actually shouldn't hit a nerve if I say that personally, Catriona's take on poverty is problematic. This has been consistent since her preliminary speech up to the final answer. But can her viewpoint be radicalized? The answer is yes.

Meanwhile, @rizadivinee said that Catriona should immerse herself more with the living condition of the poor. This was echoed by Twitter user @MilllennialOfMNL by saying that Catriona should be taught that seeing the beauty in everything is not enough and that what the poor Filipinos need is empowerment to get out of poverty.

Allan Ray hopes that Gray will learn more about poverty and its reality.

I hope Catriona Gray will show people na she can and will be a progressive, that people like her will learn about poverty and its reality. I guess that’s what’s needed to bridge the gap among those who are wary to support her because of one of her answers.

But for Kel, while he agrees that there’s nothing beautiful in poverty, he takes consolation that Gray has the willingness to end it.

There's nothing beautiful in poverty. But the willingness to end it is what matters. Pretty sure Catriona has done more than most of us here lol. And we have a winner in her.

This was echoed by Bonnie Regato saying that he believes that Catriona will put hard work in learning the poverty problem in the country.

So kahit mej may romanticization of poverty sa answer niya, I'm sure she'll show the same hardwork and fervor to learn more abt the problem that has been crippling our country.

Here’s what other netizens have to say about Catriona’s winning answer:

What do you think of Catriona Gray’s winning answer? Let us know in the comments section below. – Rappler.com