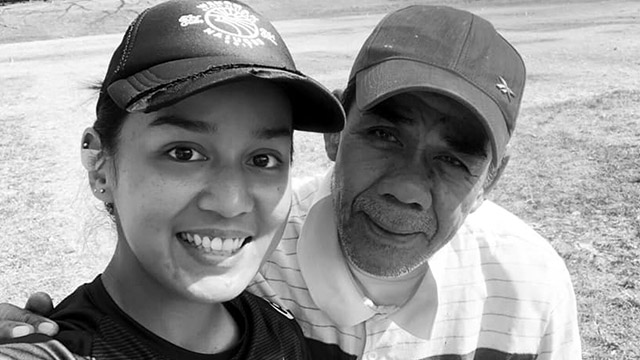 MANILA, Philippines – It’s been two years since College of Law graduate Alex Castro last visited the University of the Philippines-Diliman. On Saturday, February 23, she finally went back to look for the great mantataho (soy pudding vendor) – her Tatay Dong.

In a now viral post, Alex expressed her immense gratitude to Tatay Dong, a taho vendor whom she met in 2009. Coming from a broken family, Alex found an honorary father in UP-Diliman through the taho vendor. (READ: Taxi driver-lawyer is driven to succeed)

When she was a freshman, she would always see Tatay Dong every 7 am outside the building where her morning classes were held, and chatted with him over taho.

When the taho vendor found out that Alex went to school with an empty stomach, he waited for her with a fresh cup of taho every morning until she completed her undergrad degree. (READ: [OPINION] Gears shifted: From nurse to lawyer)

According to Alex, the taho vendor always made it a point to interact with the students in UP.

Although Alex was just one of his regulars, Tatay Dong was always so protective of her.

During a rainy day in December 2009, Tatay Dong handed Alex a package along with her usual taho.

Alex narrated, “When I opened it, it was your jacket. The one you were wearing the previous morning and all the mornings before that – your only jacket…The only thing you said to me when I tried to give it back for the last time was: ‘Nilabhan ko na ‘yan, ‘Nak. Iyo na ‘yan,’ (I already washed that, child. It’s yours).”

Eventually, Alex returned the favor by giving him a new jacket to wear. Tatay Dong wore it with so much pride and with such a huge smile every morning.

“Whenever your friends asked about it, you’d always say, ‘Bigay ng anak ko ‘yan,” Alex said. (This was given by my daughter.)

“You were such a huge part of my UP experience. In fact, I can’t think about UP without thinking about you,” added Alex.

In 2017, she graduated from UP Law and took the bar exams after. She is now a licensed lawyer.

Since she graduated in 2017, she hasn’t been able to visit UP because she was preparing for the bar exams and went straight to work. (READ: Filipino Penn Law grad to classmates: Be responsible world citizens)

Alex did not see Tatay Dong. They had no communication at all after she graduated. The only way for Alex to see him or talk to him was to search for him in UP which she was unable to do due to her busy schedule.

On February 23, Alex went to UP early in the morning for her frisbee training. She was already looking for Tatay Dong when she arrived at the Sunken Garden, but he was not there that morning.

Fortunately, his friend, who was also a taho vendor, saw Alex and told Tatay Dong about the good news.

Alex couldn’t help but smile when she saw Tatay Dong rushing to the Sunken Garden from afar. After a decade, Alex was finally able to utter the words that Tatay Dong said he would wait to hear from her.

Tatay Dong was so delighted when Alex said those words, expressing how proud he was of her.

She recounted Tatay Dong’s words when he found out she was finally a lawyer.

(Did you know, I still have the jacket you gave me. Sometimes, I look at it, wear it, and then I remember you. I always wonder about how you are. And now you’re already a lawyer.)

Alex said that she couldn’t help but be moved and inspired by Tatay Dong. The way he touched so many lives reminded her to strive to be kind to everyone.

“’Yun ‘yung legit na (That’s the legit), ‘When I grow up, I want to be just like him’ – something I never had the chance to say about my own father,” Alex said.

Netizens were also touched by Alex and Tatay Dong’s special father-and-daughter relationship. They praised Alex for not forgetting about the taho vendor whom she considers as her honorary father. (READ: Former Comelec janitor to lawyer – dreams come true at 2016 Bar exams)

Alex encourages students and school alumni to thank the people in the community who had helped and cared for them along the way. She also suggests taking time to chat with them a little whenever they bump into them.

“It requires very little effort from us, but it means the world to them whenever we do,” Alex said. – Rappler.com