Sonny Angara under fire for ‘#ShowerTogether’ tweet amid water crisis 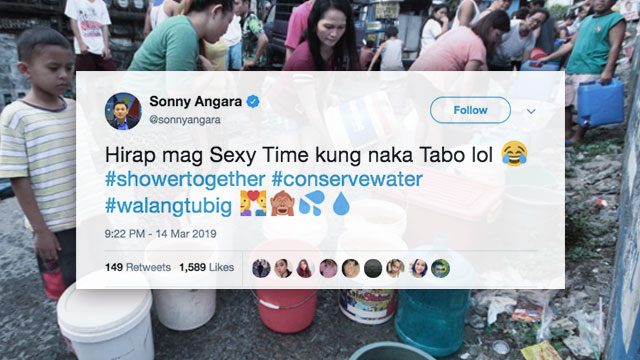 Facebook Twitter Copy URL
Copied
Netizens are quick to point out the insensitivity of the joke during a water crisis that is affecting not just households, but also businesses, hospitals, and schools

MANILA, Philippines– Amid a water crisis being experienced by thousands of residents in Metro Manila and Rizal, reelectionist senator Sonny Angara piped up on Thursday, March 14, with a joke to #ShowerTogether.

Angara said in a tweet that “sexy time” was difficult if you are only using a tabo (dipper). He posted it along with the hashtags #ShowerTogether, #ConserveWater, #WalangTubig.

Netizens were quick to point out the insensitivity of the joke during a raging water crisis that is affecting not just households, but also businesses, hospitals, and schools. (WATCH: In hospitals, water woes take shape where lives are at stake)

Really sir?! Wag kami! & most certainly wag ako, puyat ako kakahintay ng rasyon ng tubig! The least of the worries of the Filipino people now is this sentiment. I'm sure u have water to conserve. Good on you, but please don't make this problem light with your insensitive remarks.

Netizens also pointed out how the reelectionist senator should check his privilege, and consider the plight of the Filipinos who are struggling due to the inconveniences brought by the water interruptions. (READ: Domino effect: Water crisis causing more trash, hurting businesses)

i doubt if our esteemed senator is even affected by the water shortage.

that's what his alalays are for.

Stare at this image. Contemplate on the plight of your fellow kababayans because of the water crisis. Then check your tweet again and let us know what you feel. pic.twitter.com/vNayOd6kMB

@sonnyangara kelan pa naging punchline ang suffering ng mga Pilipino? We don’t ask you to feel our suffering, especially from your Train Law, but at least be sensitive enough not to play your balls in our Face! #WalangAngaraNgBuhay https://t.co/jcdhrfSjL4

They stressed that the water crisis wass no laughing matter. They suggested that as a public official, Angara should instead focus on looking for tangible solutions rather than making jokes about the water crisis. They added that the seriousness of the situation required sensitivity to the Filipinos’ struggles.

Senator, with all due respect, instead of sexualising the issue of the “water crisis” — I think what the people need to hear from public officials are immediate actions to the problem. Also, your sexual activity is not a national interest for people to be concerned about. Thanks

Katawa tawa lang ang sitwasyon ng mga Pilipino sa kanila, ano?  Nakakagalit! The stupidity of someone like him is not acceptable! Ugh! We really have the worst version of "public leaders". https://t.co/0dq1BgjgfA

wow, this is not something you should joke about.

people are having difficulties with their livelihoods thanks to this issue.

wag ka po munang maki-get in sa youth ngayon because this is not funny nor a good way to promote yourself to the people. https://t.co/rHE25FZIzi

@sonnyangara  This is why the Philippines is in trouble – you have this insensitive senator trying to make fun of a difficult situation. Plus the fact that he sponsored the TRAIN law. Pampahirap ng buhay. Let him have his sexy time with his tabo – no to sonny angara. https://t.co/qizLeQtspo

As a reply to a netizen who asked if the Filipinos’ suffering was a joke to him, Angara answered: “Magkasama tayo lahat dito at gagawan natin ng solusyon. (We’re in this together, and we’ll find a solution)”

Angara clarified to ABS-CBN that the tweet doesn’t mean he was not taking the water crisis seriously.

“Just because we crack a joke does not mean we do not take this seriously. In fact, we have already made suggestions on how to curb the crisis in both the short term and long term,” he said. – Rappler.com