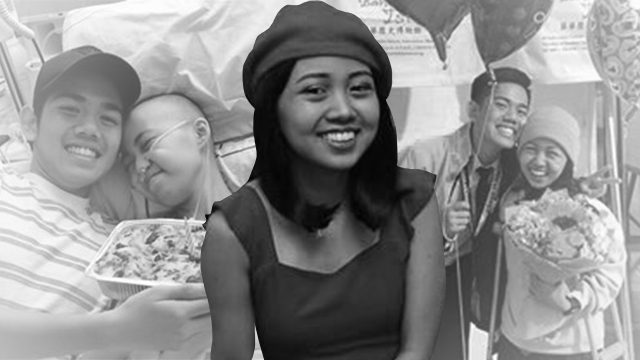 Blanco’s mom, Belle, confirmed to Rappler her daughter’s death. A page that is dedicated to Blanco, and is managed by her relatives, also announced the news, saying that she “earned her angel wings and [is] slowly going up in heaven” at 3 pm on Saturday, March 23.

Her boyfriend, Gab Santa Ana, has no words but love and gratitude for the girl with whom he spent 6 years.

“Max fought hard and I’m thankful for everything. No more pain, no more suffering. She might [have] left us, but her spirit will always be here. I love you Maxine,” he wrote in a Facebook post.

On Wednesday, March 20, Sta Ana moved netizens to tears after sharing their inspiring story, which he referred to as a “roller-coaster ride.” As of this posting, it has more than 110,000 shares and 83,000 reactions.

It was in 2018 when Blanco was diagnosed with cancer. According to Santa Ana, it was during that time when he decided to stand firm and never leave his girlfriend.

Blanco was set to celebrate her 20th birthday next week, but her family earlier decided to cancel the prepared celebration as they wanted to focus on her health.

Blanco’s birthday wish? To have her and Santa Ana’s birthday to be celebrated together.

A few days before her death, her family said they didn’t know why she wished for it, but if given the chance, they would have wanted to make it her most special one.