Student representatives slam ‘weaponization of the law’ to silence critics Facebook Twitter Copy URL
Copied
KAISA UP, along with other student representatives, condemn the aggressions done by the government to silence and harass journalists

MANILA, Philippines – Prompted by the recent arrest of Rappler CEO Maria Ressa over an anti-dummy law charge, students slammed the Duterte administration’s acts to shut down critics in a torch rally at the Palma Hall, University of the Philippines (UP) Diliman, on Tuesday, April 2.

UP political party Nagkakaisang Iskolar para sa Pamantasan at Sambayanan (KAISA), along with other student representatives, condemned the aggressions done by the government to silence and harass journalists.

“In an administration that promised change of life for Filipino families, and (to) win the ‘war on drugs,’ big-time drug lords have yet to be arrested and much less convicted, but the press who are doing their job as watchdogs of the government are being harassed and silenced,” said Ceiz Alejandro, a representative from the UP College of Home Economics Student Council.

“The intentions of this administration are clear: to coddle the criminals, silence the critics and the truth,” she added.

Alejandro maintained attacks on the media thinly veiled in a barrage of cases and complaints show that the law is being weaponized.

“When law is administered with an unequal hand, titigil tayo sa pag uusap na ito ay tungkol sa rule of law at tatawagin natin ito (let’s stop saying this is about rule of law and call it) for what it really is: the weaponization of law and the perversion of justice,” she said.

UP School of Economics representative Louise Faraon emphasized the role journalists play in exposing the realities of the Philippines and the current administration. She assured that despite attempts to silence critics, the youth will continue to stand with and fight for journalists to speak truth to power.

(They (the media) expose the truth about what’s happening in the administration and how Duterte abuses the rights of the nation’s scholars and the Filipinos.)

UP student representatives emphasized how the acts of the current administration trickle down to other sectors of society.

They pointed out the increased burden faced by Filipinos due to the government’s push on certain policies and projects including the Tax Reform for Acceleration and Inclusion (TRAIN) act and the lapses in the implementation of the free tuition law.

Shara Mae Landicho, former KAISA UP chairperson, punctuated the importance of choosing government leaders and actively participating in the upcoming elections to lessen the struggles of marginalized sectors.

(The voice of the youth is a big statement about what kind of society we are aiming for.)

Below are some of the photos of the protest at the Palma Hall in UP Diliman: 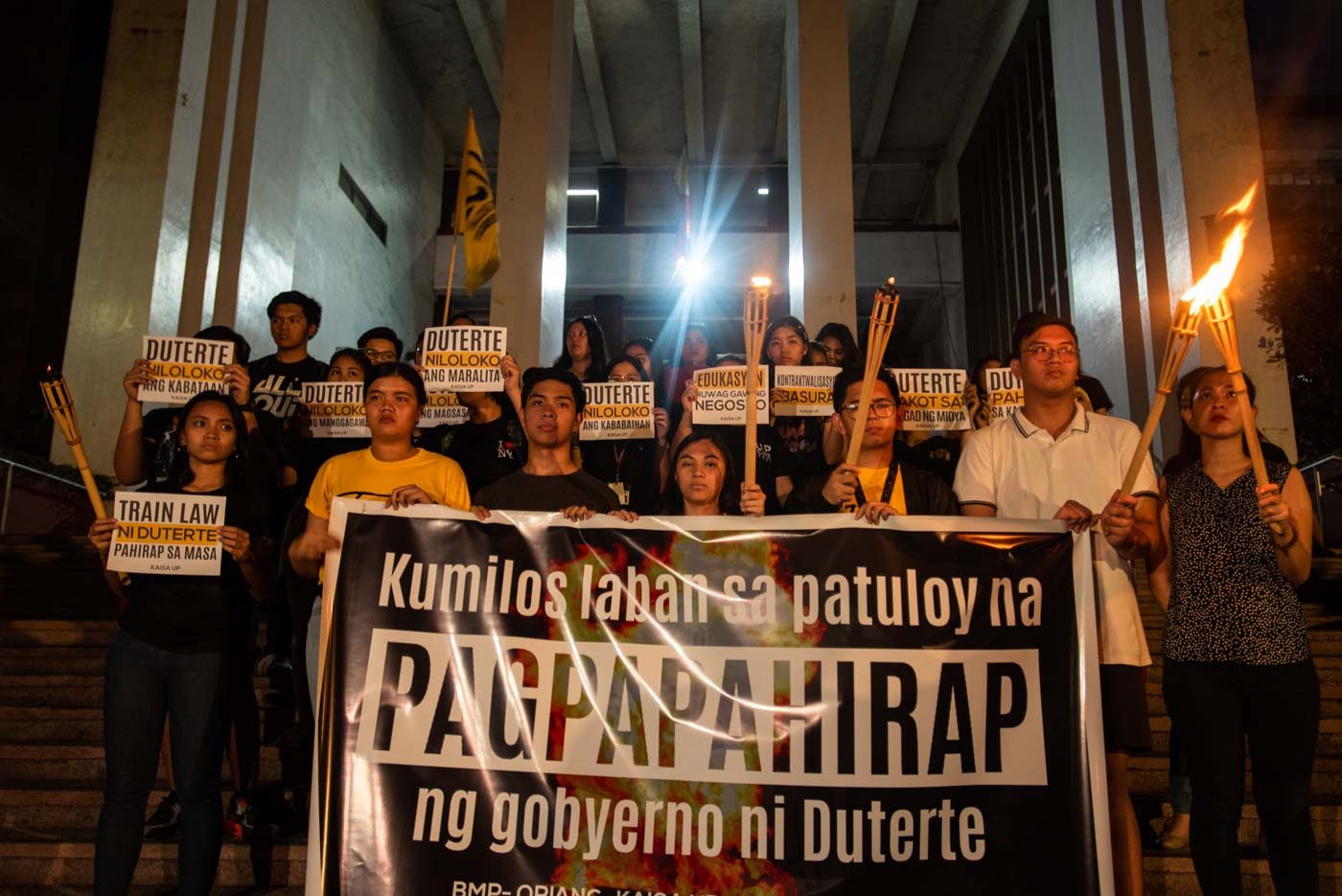