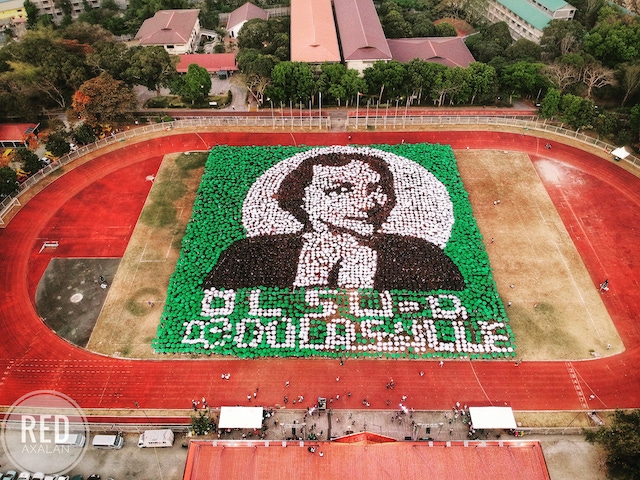 MANILA, Philippines – De La Salle University Dasmariñas (DLSU-D) had broken records with its human formation of the Lasallian star and a coin mural of the school logo.

This year,  to commemorate the 300th feast day of its founder, thousands of people held color-coded umbrelllas to form the image of St John Baptist De La Salle at the DLSU-D Track Oval on Sunday, April 7.

About 6,000 students, employees, and stakeholders of DLSU-D participated in the fundraising event dubbed as “Animosaic 2: Humans of St La Salle.”

But beyond breaking records, the meaning behind the initiatives is so much greater.  This year, the fundraising event is dedicated to all the scholars and aspiring scholars of DLSU-D.

Formation for a cause

According to Marco Polo, University Advancement Office (UAO) Director and  Animosaic 2 Project Manager, the event is not merely an attempt for the record as participants pitched in to donate to the One La Salle Scholarship Endowment Fund.

Through the P300-registration fee and the donations of the students, faculty, staff, alumni, parents, and other stakeholders, the fundraising event was able to collect an estimated gross of P2.5 million and a net of P1.25 million.

The proceeds will all go to  the One La Salle Scholarship Endowment Fund, to be shared by the high school and college divisions.

‘School for the poor’

“Since its launch 12 years ago, DLSU-D has raised close to P300 million in funds and in kind support for various initiatives. Of this amount, close to P70 million is for the scholarship endowment fund. It has helped many academic and financial aid grantees,” Polo said.

Despite the misconception about Lasallian education, the school proves that through different initiatives, it can provide education for all.

(Personally, it warms my heart that the mantra of the school which is ‘school for the poor’ is being fulfilled. We all know that it’s important to break the Chinese record but it was clarified that the event is a fundraising event for the scholars so that made me really happy.)

Through the years, DLSU-D was able to provide access to quality education for all, especially to the youth of its community.

(The event still really had an impact on me that yes, I won’t be able to benefit from it since I’m graduating, but I got happier because this is for future scholars. There will be more students like me that will be given a chance to have a Lasallian education.)

Aside from providing scholarships, DLSU-D also offers free quality education through the Night College for the indigent working youth of Cavite and the Balik Aral Program for the out-of-school youth.

The Animosaic 2: Human of St. La Salle is only one of the initiatives of DLSU-D to respond to the challenge of providing scholarships, grants, and financial aid to Lasallian students.