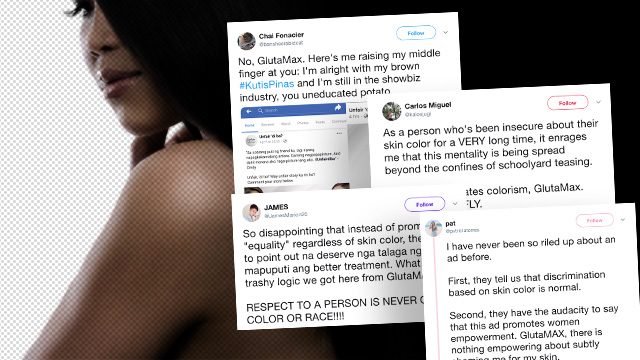 Facebook Twitter Copy URL
Copied
'Unfair, 'di ba,' that some brands take a jab at skin color for the sake of profit

To launch the new campaign for their Nano White line, GlutaMax released a series of posts on their Facebook page, which netizens said were distasteful in terms of creative treatment.

In the Philippines, whitening brands have been known to brazenly tell women through advertisements that they should have fairer skin to be considered attractive.

GlutaMax’s “Your Fair Advantage” campaign ads sing the same tune. They tell Filipinos that to be fair doesn’t just make people see you as “more attractive” or “prettier.” The brand goes on to promise added perks to being fair-skinned.

Netizens, however, were quick to dismiss the ad as promotive of “colorism,” citing other advertisements that had the same tones of color discrimination. Glutamax was called out by netizens as capitalists perpetuating a culture of discrimination, inequality, and shaming

As a person who's been insecure about their skin color for a VERY long time, it enrages me that this mentality is being spread beyond the confines of schoolyard teasing.

Your ad perpetuates colorism, GlutaMax. That does NOT FLY. https://t.co/8zrgpBtpyV

So disappointing that instead of promoting "equality" regardless of skin color, they opted to point out na deserve nga talaga ng mapuputi ang better treatment. What a trashy logic we got here from GlutaMAX.

RESPECT TO A PERSON IS NEVER OF COLOR OR RACE!!!! pic.twitter.com/mhoB4Whtqj

I have never been so riled up about an ad before.

First, they tell us that discrimination based on skin color is normal.

Second, they have the audacity to say that this ad promotes women empowerment. GlutaMAX, there is nothing empowering about subtly shaming me for my skin. pic.twitter.com/aNQvrY3K29

While brands have been known to pull stunts like controversial campaigns just to get people talking about their products, questions hound the ethics of such strategies.

What are your thoughts on Glutamax’s “Your Fair Advantage” campaign? Do you think it harmed society’s views on people of color and beauty, or not? Let us know. — Rappler.com