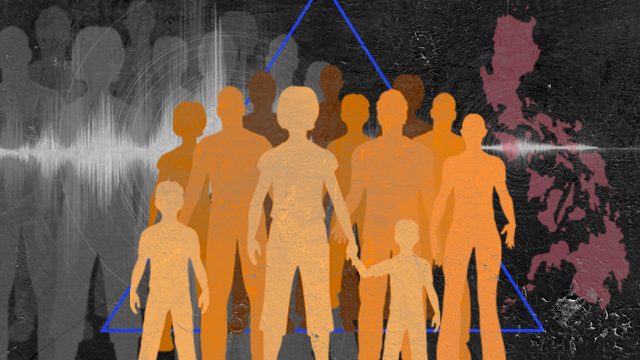 Facebook Twitter Copy URL
Copied
A survey from the Harvard Humanitarian Initiative shows that Filipinos, especially the less educated ones, are hardly prepared for an earthquake

MANILA, Philippines – Are Filipino households prepared for a strong earthquake?

A study released on Wednesday, May 1, showed that most Filipino households hardly have earthquake preparedness plans.  This lack of preparation was the reason the Harvard Humanitarian Initiative (HHI) urged disaster risk reduction and management (DRRM) offices to ensure that information on earthquakes are accessible and comprehensible to all, especially among the less educated Filipinos.

HHI’s study, through its DisasterNet Philippines project, was gathered  from a nationwide household survey conducted between March and April 2017, with a total of 4,368 interviews. There were 240 household respondents in each of the 18 regions, except with the National Capital Region (NCR), where more were tapped for the survey.

Coincidentally, the results of the survey were released just a few days after strong earthquakes jolted Luzon and Visayas.

Need for a boost

HHI Resilient Communities Program Director Vincenzo Bollettino said in a statement that timely access to disaster information and plans for what to do during an earthquake can save lives. (READ: How to prepare when disaster and emergency strike)

“Filipinos should be aware of the Department of Interior and Local Government’s (DILG) guidelines on disaster preparedness (Operation Listo) and acquaint themselves with evacuation routes, evacuation shelter locations and should have emergency kits prepared,” Bollettino added.

The study showed that the highly educated members of the household were more likely to have earthquake disaster plans (below 10%) than the less educated ones (below 5%).

More highly educated respondents of the survey and heads of household were more likely to have a plan in case of earthquakes. (READ: Time to prepare that disaster kit)

The familiarity on the Philippine Institute of Volcanology and Seismology (Phivolcs) Earthquake Intensity Scale (PEIS), a seismic scale used to measure the intensity of a temblor, was more common at 62% among households with members who completed tertiary education and have skilled professionals.

Even before the magnitude 6.1 earthquake jolted Central Luzon on April 22, this region, along with Western Visayas only showed 3% of preparedness planning at the household level.

The least prepared regions at 1% each were Ilocos Region and Cagayan Valley. Near the bottom at 2% preparedness were Bicol, Zamboanga Peninsula, and Soccsksargen.

Familiarity with PEIS were more common at 51% among younger respondents at 18 to 35-years old than the older Filipinos. This was followed by Filipinos with ages 36-55 at 48% and only 43% for 56 and older.

The survey also showed that households dependent on agriculture or fishing as their main livelihood are less likely to have an earthquake management plan at 3%, than skilled and unskilled workers at 8%.

Communications coordinator of HHI DisasterNet Philippines Mark Toldo said that the study aims to present specific data for each type of disaster after its general study on the perceptions of disaster resilience and preparedness in the Philippines. (READ: Despite experience with typhoons, most Filipinos ‘not prepared for disasters’)

“What we’re doing right now is we’re getting specific data from the results of the survey on each type of disaster such as earthquake. The other month, we released some data on drought. We hope to release more specific data in the coming months,” Toldo said. –  with a report from Jene-Anne Pangue/Rappler.com